Photo (above) courtesy of the net.

Tried some of Joseph's home grown winter melon some months ago (grows in the warm weather, eaten traditionally in the cold weather due to it's long shelf life) and I'm determined to grow some of my own as I found it delicious. I've just planted some seeds so fingers crossed I get seedlings.

Another one of those multi use plants where the shoots, leaves, tendrils and fruit are all edible. I just love growing those types of plants in the garden!

The winter melon, also called white gourd, winter gourd, ash gourd, "fuzzy gourd", or "fuzzy melon", is a vine grown for its very large fruit, eaten as a vegetable when mature. It is the only member of the genus Benincasa. The fruit is fuzzy when young. The immature melon has thick white flesh that is sweet when eaten. By maturity, the fruit loses its hairs and develops a waxy coating, giving rise to the name wax gourd, and providing a long shelf life. The melon may grow as large as 80 cm in length. Although the fruit is referred to as a "melon," the fully grown crop is not sweet. Originally cultivated in Southeast Asia, the winter melon is now widely grown in East Asia and South Asia as well.

The winter melon requires very warm weather to grow but can be stored for many months much like winter squash. It is commonly eaten throughout winter in countries of deciduous vegetation such as China, as one of the few vegetables available during winter, hence its Chinese name literally means 'winter melon'. The winter melon can typically be stored for 12 months.

In Vietnamese cuisine, it is called bí đao, which is usually used to make soup or stew. When cooked with pork short ribs, the soup can help produce more milk for breastfeeding mothers.

In Chinese cuisine the melons are used in stir fry or usually combined with pork or pork/beef bones to make winter melon soup, often served in the scooped out melon, carved by scraping off the waxy coating. It is also chopped and candied[1] as wintermelon candy (táng dōng guā) to be commonly eaten at New Year festivals, or as filling for Sweetheart cake (lǎopó bǐng). It has also been used as the base filling in Chinese and Taiwanese mooncakes for the Moon Festival.

Winter melon is called kundol,kondol, or gondol in the Philippines. It is candied (referred to plainly as "kundol")and is used as a pastry filing for hopia. It is also an ingredient in some savory soups (sabaw) and stir-fries (guisado). It is one of the vegetables mentioned in the Filipino folk song "Bahay Kubo."

In North India and Pakistan, the vegetable is also used to prepare a candy called Petha. In South Indian cuisine, it is used to make curries. In Ayurvedic remedies it used to increase appetite also its fresh juice is used to cure kidney stones. The seeds are cooked in milk and taken to increase "sperm count" and to improve sperm locomotion.

Occasionally, it is used to produce a fruit drink which has a very distinctive taste. It is usually sweetened with caramelized sugar, which enhances the taste. In Southeast Asia, the drink is widely marketed as winter melon tea.

The shoots, tendrils, and leaves of the plant may also be eaten as greens.

In India, Ash gourd is used to make a liquefied dish with curds or buttermilk (a popular traditional South Indian recipe)[2] Cubed or sliced, winter melon can be steamed, simmered, braised or parboiled and added to stir-fries. Best used in soups, season this rather mild and bland melon with strong spices and herbs. Winter melon are suitable for pickling and may be diced and candied. Whole melons keep in a cool place for months.

Wax Gourd, also called White Gourd, is a fast-growing, long-season, warm-climate vegetable. The plant produces fruits on vines, like the pumpkin on ground, which can grow up to 50 pounds. Fruits can be stored in a cool place for months and used later in the winter season. Thus this gourd is called Tong Qwa, meaning "Winter Melon" in Chinese. The unopened fruits can be kept fresh for a long time, but the flesh shall be used in cooking within a few days once the fruit is cut into pieces.

NOTE: Wax Gourd needs insects/honey bees to carry out the pollinating process for setting fruits. If the insects are not available in your area, the pollinating process can be done manually, by picking up male flowers and transferring pollens from male flower to femal flowers (by face-to-face touching the center part of flowers). This process should be carried out when flowering is active during the daytime.

Planted a heap of Winter Melon seed (ex Joseph) a couple of weeks ago and the b. rats look like they have eaten them all. I expected some to come up but there is still no sign of shoots.

I've bought a covered seed raising tray for $15 from Master Hardware and will give that a go.

The rats have received another dose of rat poison in the ceiling and the drowning trap has been brought out once again. No success with it so far though.

Finally! two Winter Melon seed have come up out of many planted. Now all I have to do is keep them alive and uneaten by the bugs. 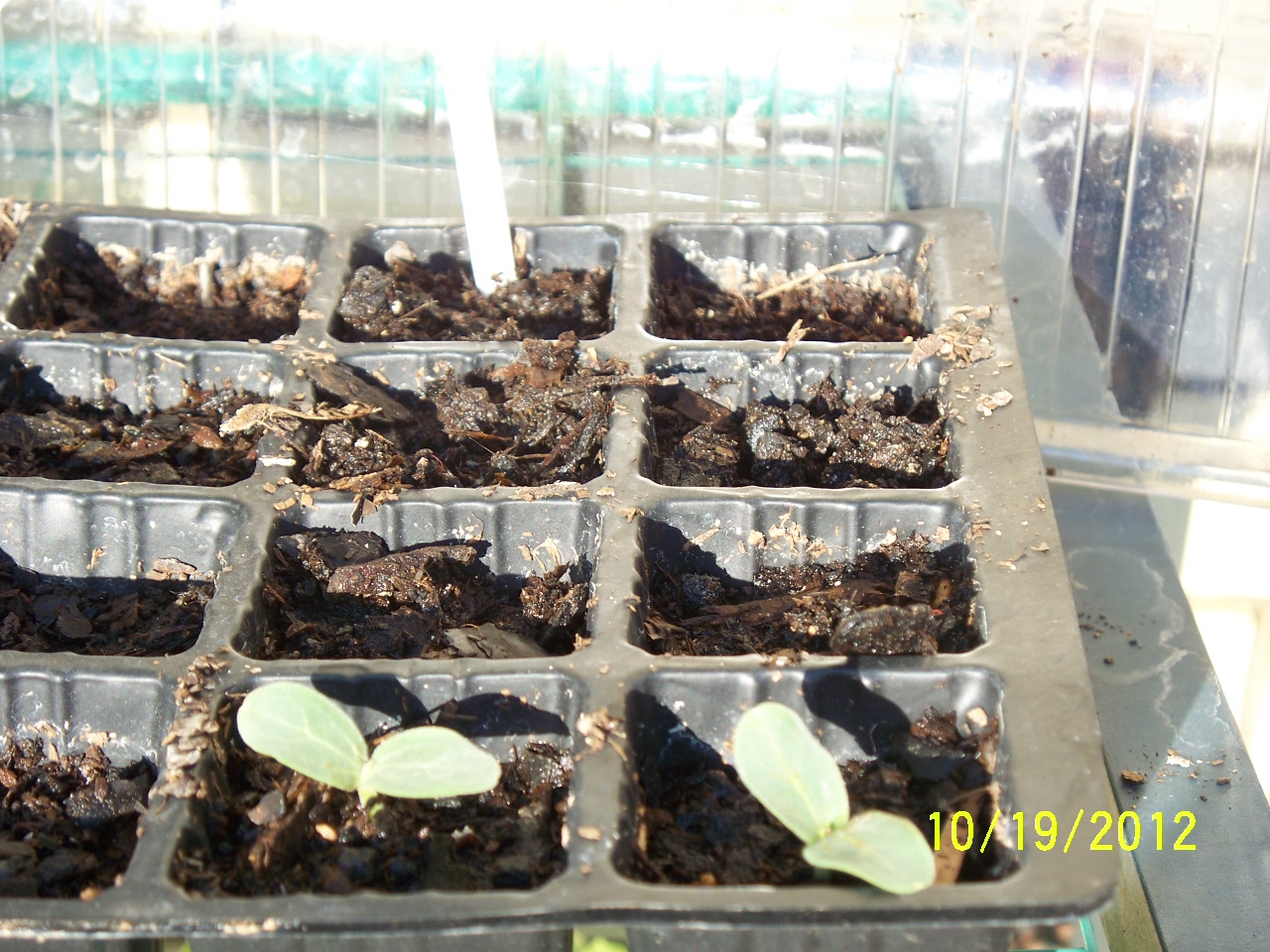 Three of these seed not only survived but have thrived and are growing very well in one of the elevated beds, spilling over the sides and heading for the regular beds. Even Nathan's is growing and has come through our mutual fence into my yard.

I have been fertilising female flowers each morning and here is the first fruit and subsequent pics at three day intervals. It's growing like the clappers: 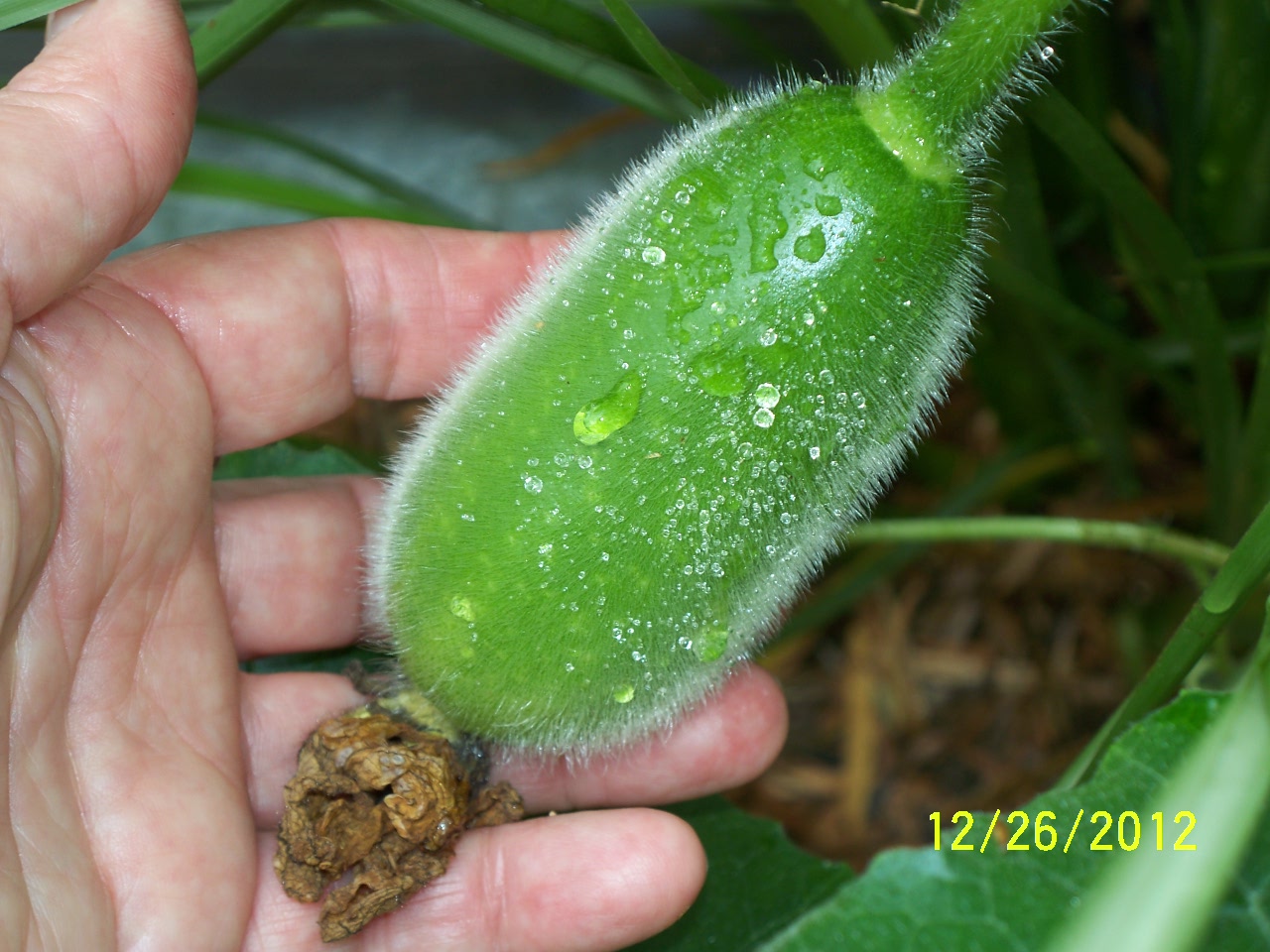 Below: 3days after original pic. 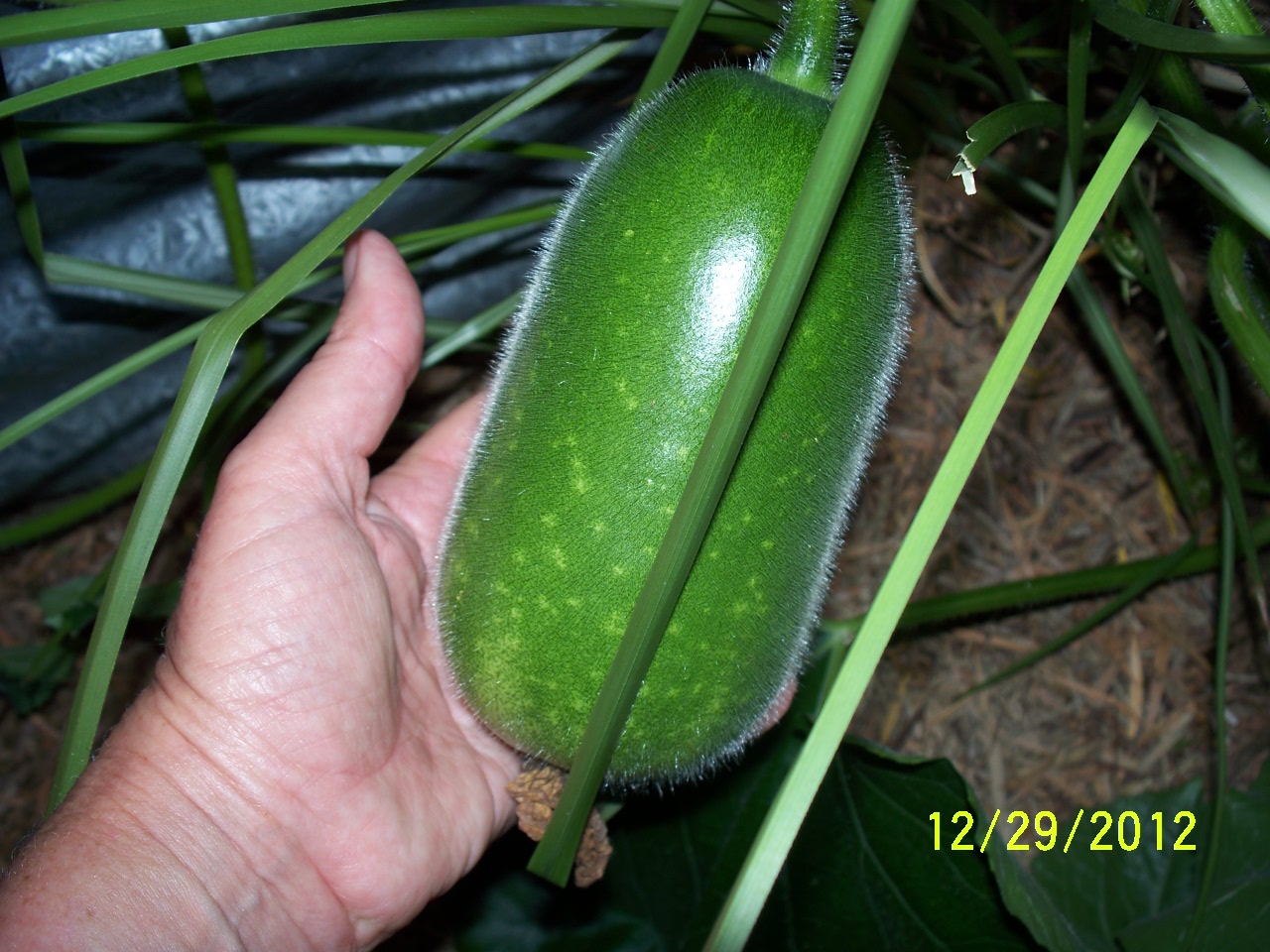 Below: 6 days after original pic. Dangling above the ground a bit still. 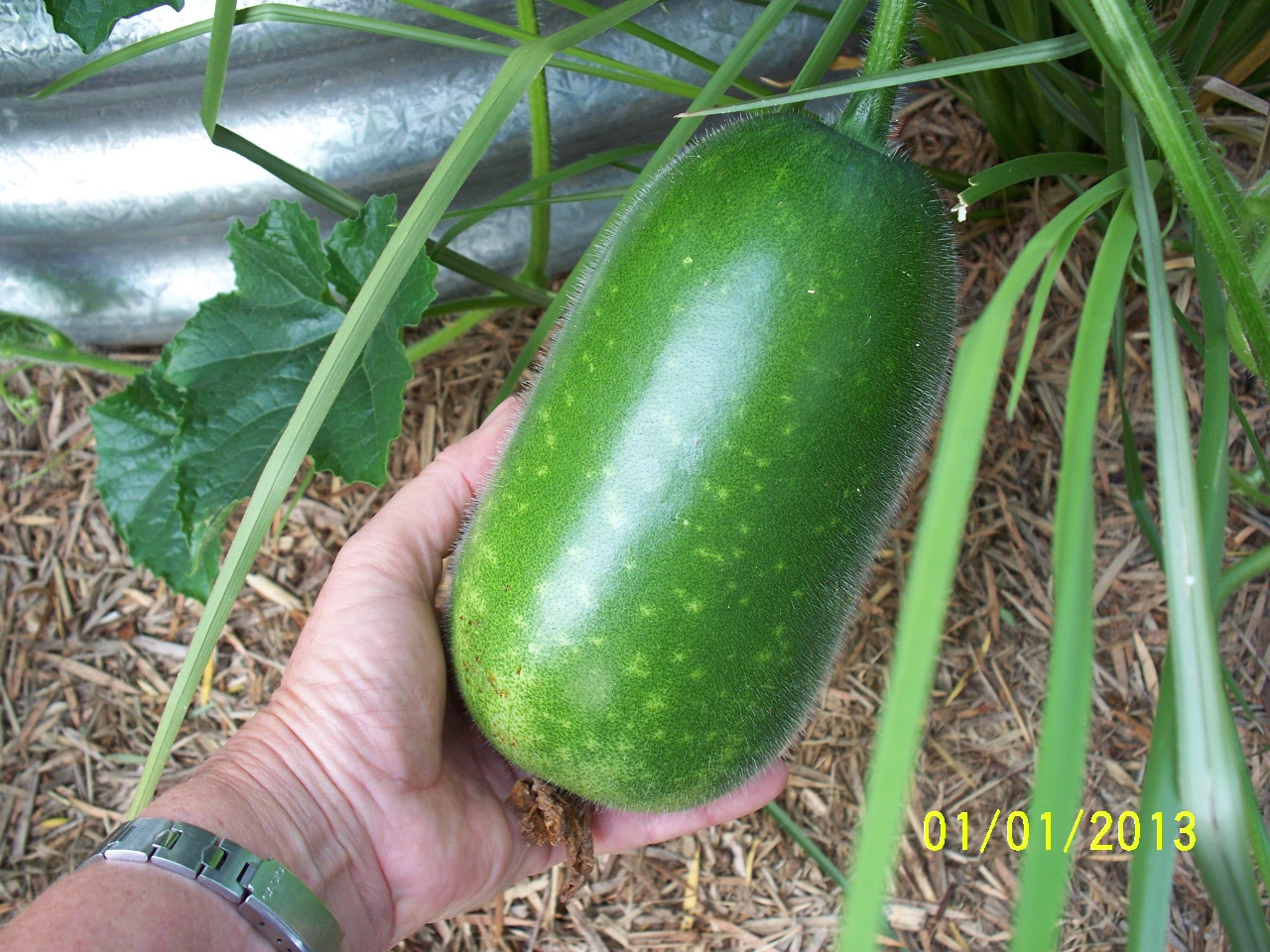 Below: 9 days after original pic. Fruit is now resting on the ground and very heavy. Below: 11days old. Now resting on styrofoam at Joseph's suggestion to avoid rotting. 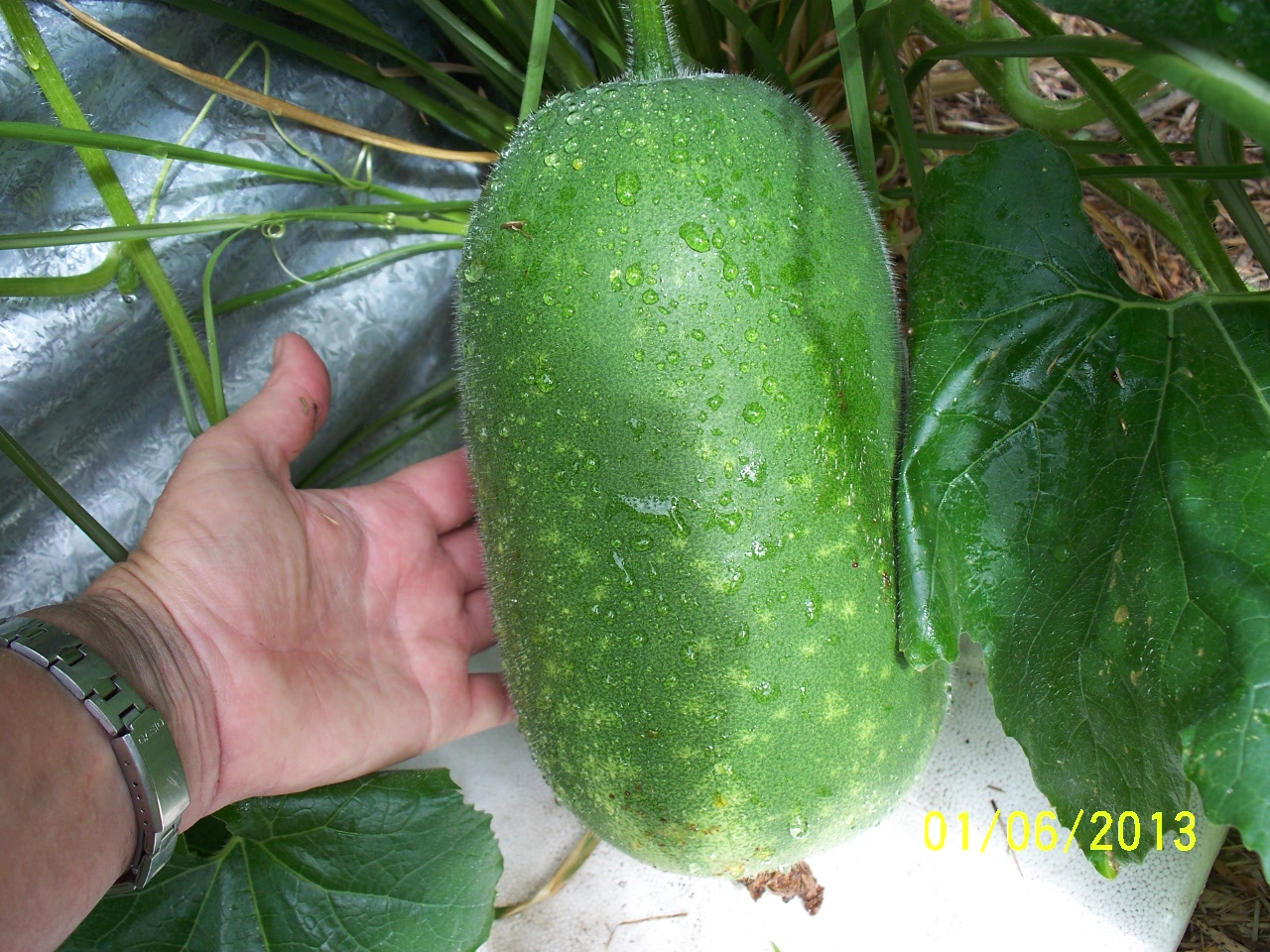 Below: 16days old. Beginning to develop the white protective coating at the top. Below: Pics of some of the other developing fruit - NOTE 14.01.13 All of these disappeared before they got any bigger. Two that were hanging from the frame are still growing. Below are the male (top) and female (bottom) flowers up close: One of the babies was badly stung, but it appears to be the only one. There would be about four fruit growing well. 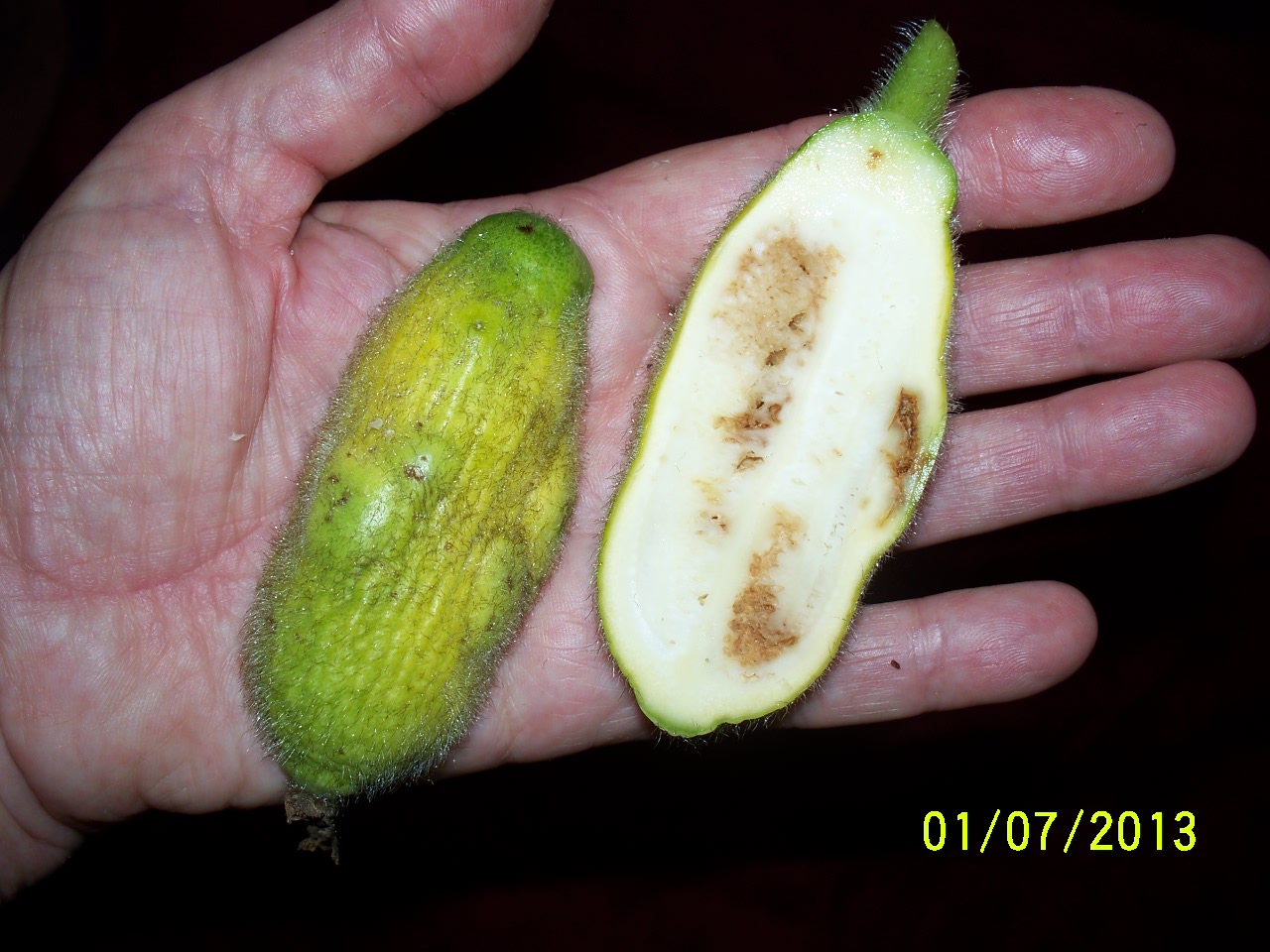 Found this fruit this morning. One of my three baby fruit, so now one precious one down. 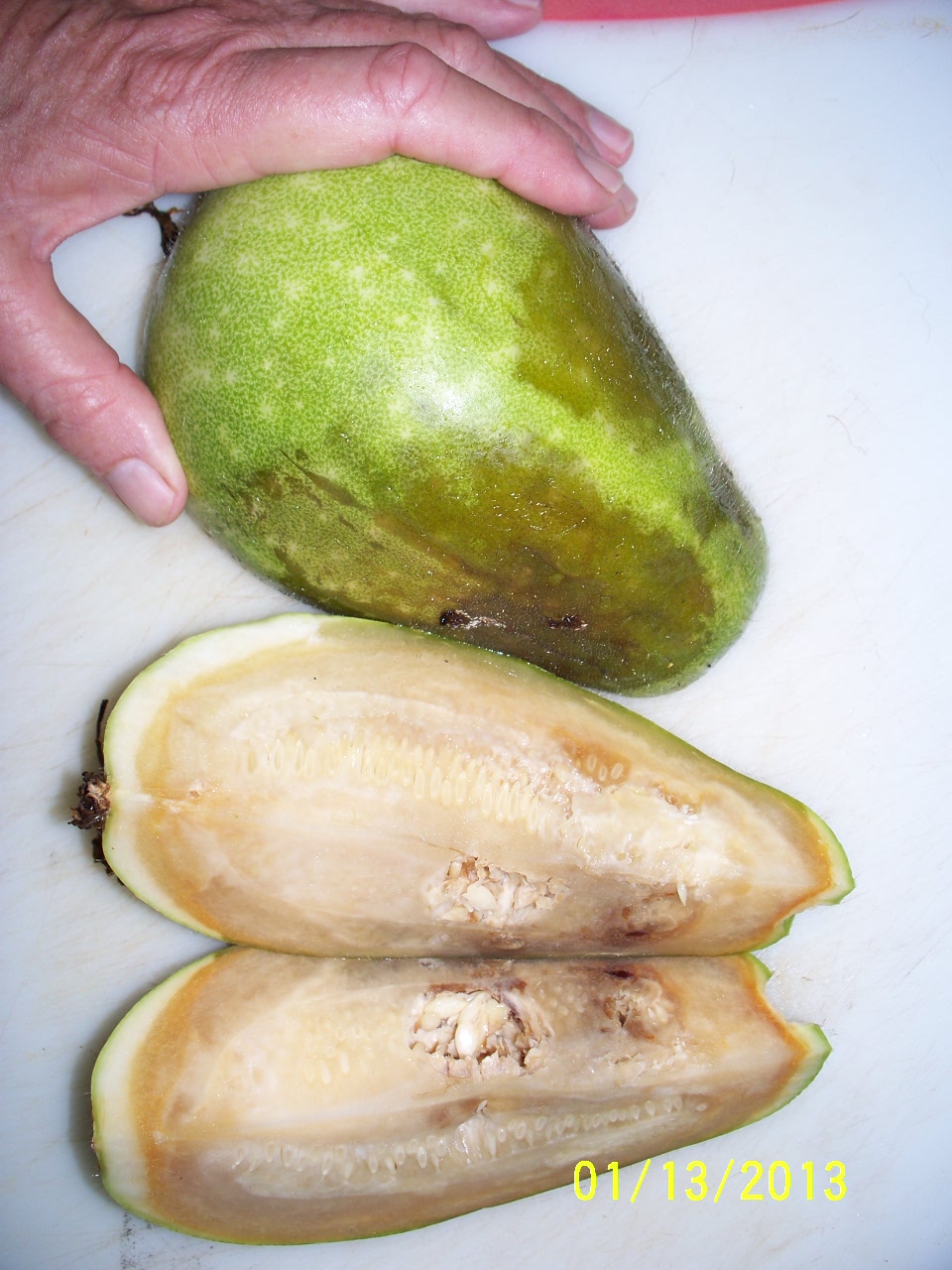