This is mostly because of the pumpkins. They heard me thinking about ripping them out and promptly started to produce masses of fruit. Sigh. So I left them - why have them in for 3 months and then rip them out just when they start producing? So this lot have been in for 4 months - going on for 5 now! They have taken over the entire garden - but they are a good weed suppressant and I haven't watered them so it's been a nice break over the summer.

(Excuse our old lino - it's coming out soon!)

We have been eating a lot of orange fruit. If you eat too much beta carotene you can actually go orange. I wouldn't be surprised. It's funny because last year I was worried I wasn't producing enough orange vegetables and that it would affect the girls' eyesight (they don't eat tonnes of pawpaw, it's not their favourite, and they eat the carrots faster than I can grow them). So this year...! Seriously, there are millions in here - and some of them are HUGE. All of them are bigger than my fist.

I particularly like the sweet potato and the pumpkin baked with olive oil, sea salt and either thyme or rosemary. You can put it in anything after that. Also sweet potato gratin is a bit of a favourite with everyone :) I've been trying to feed it to people at BBQs (sweet potato makes good chips if you don't burn them) but it's terribly filling, and there is so much of it - we're going to be eating it forever! This is the butternut - I also had Jap. Look how fresh - picked the same day!

There is now a war happening in the driveway - the pumpkins are trying to take over the sweet potato patch, and the sweet potatoes are attempting to escape by taking over from the jasmines and other ornamentals on the fence! It's madness. I have to trim the path so we can get past. 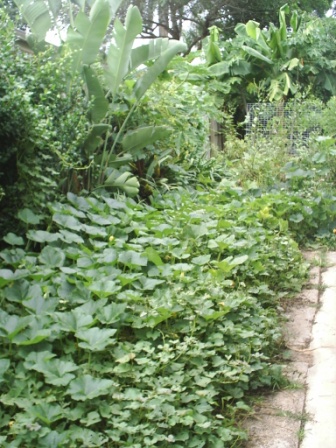 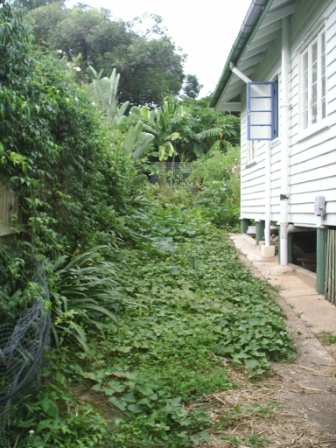 I have finally cleared the cucurbits out of the vegie garden - although I've left them growing around it still (they're still producing). 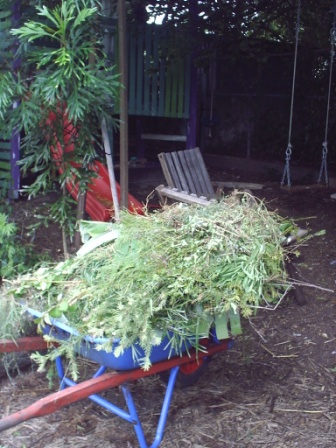 (this is all the weeds out of the front yard, plus a few banana shoots from down the side - I'd let it go a bit!) 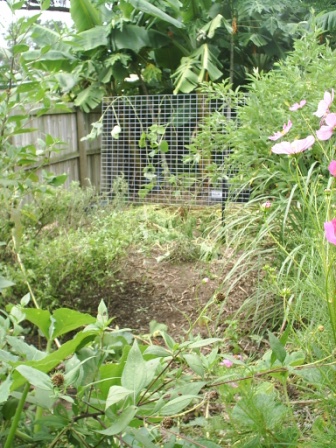 If you stand in the pumpkins you can see the cleared area in the vegie garden. I've moved the bean trellis and draped the remaining bean on it - hopefully it will come good.

There is a fairly serious nematode infestation in the main vegie garden - root knot nematode by the look of the roots. I pulled everything out and then doused the whole garden with molasses diluted into a watering can. I don't think I used enough. I will do it again soon. Then I pulled out the industrial quantities of Mexican Marigold that i grew over summer and I've laid them onto the beds as a green mulch. I now want some good rain so it breaks down fast and the chemicals from the marigolds get into the soil. I'll probably then chop the soft tops up and leave them to decompose into the soil, and chuck the big stems over into the banana pawpaw circle. 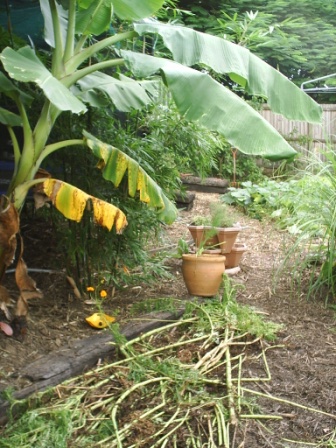 I wonder if neem works for nematodes? I know that in India it used as a 'soil conditioner'. I wonder if it would take out beasties I want as well. Would this be worth it? I might have to leave the entire garden fallow for a season or two otherwise - bad!

I intend to crowbar and pitchfork lever the entire garden and spread a good quantity of Rachael and Grant's horse manure. I'll leave it for a week or so, check the pH, correct with dolomite or sulphur if I need to, and then it's time to plant those glorious winter vegies. I'll take up the remaining pumpkins and do the same there too - I need to extend the vegie garden more anyway, especially if I can't use the main compost beds for a while.

The pumpkins managed to smother a few things. This is uncovered horseradish and bird of paradise. I've cut back the perennial basil, the rosemary, the cat's whiskers and the plumbago - especially the dead bits where they were smothered. That's the mystery bean on the fence. 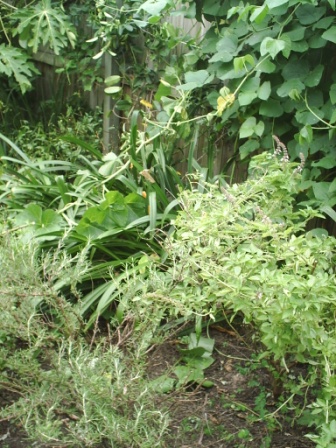 I lost the rhubarb (again!), almost all of the strawberries, all of the asparagus except one (! arg) and some garlic and onions I had left in. Sigh. Serves us right for going on holidays :) I even almost lost my mint despite the self watering pot - but hopefully it will come back again. I lost all of our parsley! I can't remember that happening before!

There is some sort of climbing bean that has survived in the garden - I suspect it might be Blue Lake, but as usual I'm not sure. There is also a very vigorous and large climbing bean on the fence - it is either Blue Lake or Scarlet Runner Bean - I'll be keen to spot the first flowers. Meanwhile it is HUGE!

The self seeded cosmos are pretty - they loved all the rain. I haven't touched them at all. 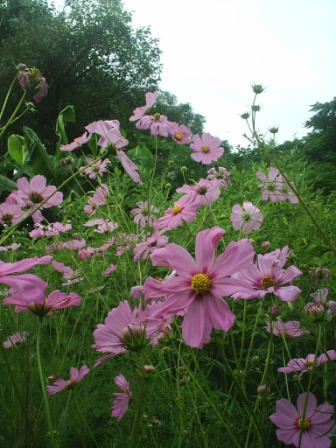 The jerusalem artichoke are dying back now and we are digging them up. The corms are not very big (I didn't water them) and not enormously prolific (especially compared to my harvests in Melbourne) but they are absolutely delicious, especially baked and chopped into other dishes - eg risotto. Apparently the French don't eat them much as they are viewed as a starvation food, especially during WWI and WWII. Croatians are apparently the same about pumpkins. I'm sure my children will be the same about both ;) Although I just found a good recipe for eggplant (slice to 0.5 cm, brush with olive oil, bake 10 mins at 220c, then 8 mins other side, until golden, top with chopped de-seeded tomatoes mixed with balsamic vinegar and sugar then drained for 15 minutes, and chopped basil leaves - it's incredible, although the kids probably still won't eat it - but at least I can put eggplants back in the garden next summer for us adults with some confidence).

The turmeric didn't get very big this year - I think it might be best as a biennial harvest - I'm going to leave these in this year - although I can still use the leaves.

We're getting ridiculous amounts of passionfruit, despite some sort of wasp that is laying its eggs in some of them - plenty for everyone. I'm going to cut it right back soon - and this time I'm not going to leave any ends on, because it didn't bother thickening up in the middle at all - all the growth went straight to the ends. This season's macadamias have started to drop too - yum! :)

Here's a progress update on the waterchestnuts - this photo shows the semishaded position they're in - they're under the canopy of the macadamia and round the corner of the house from the afternoon sun. They get roasted for about 2-3 hours at midday by direct northern sun, but then they take it easy. They're starting to die back, and I've given them two buckets of water since I un-submersed them a few weeks ago.

The male pawpaw flowers are pretty - but look: they're no good as cut flowers. These were picked yesterday. 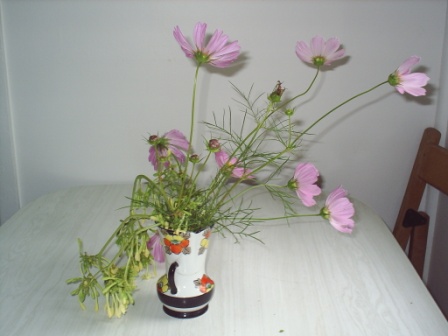 I did actually have some broccoli and corn planted in amongst the pumpkins after we got back from holidays, but the chooks scratched them all out :( I'm thinking about putting a fence around the garden after all to keep them out - bad luck if it looks agricultural. Who are we kidding anyway? ;)

The persimmon tree is losing its leaves - with a very small splash of autumn colour (note that the Women's Weekly article made it sound like we are eating these already - editorial license - not so! I only put this one in last year. Also I got to talk to Jackie French! I really enjoyed that!! She rocks). The yellow is the Marguerite sweet potato which makes a good ground cover in the orchard. There's a pineapple sticking up there too! You can see the pigeon pea is back with a vengeance and the lemon grass sets have grown like billy-o. As predicted, they make a fantastic edge and weed barrier - no pumpkin vines growing through there (although they grew over the single ones in the middle - one vine produced a pumpkin right in the middle of the lemongrass bush, we almost didn't spot it!). Vegie garden is behind this - so you can't actually see it from the house (not that I would mind - was more concerned about microclimate and weed barriers). We use the lemongrass in the chook house now as bedding, and I chop and drop the prunings from the pigeon pea as a green mulch. I still haven't de-frassed the pigeon peas I collected last season! I should get a winnow sieve - that would do it in 5 minutes. 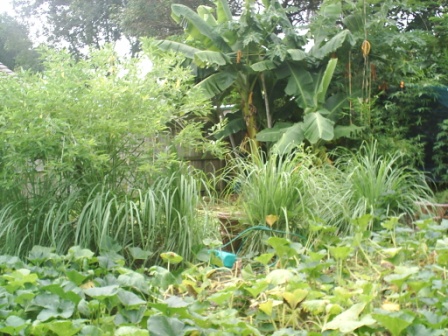