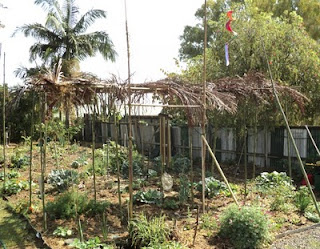 A neighbor has given me a dwarf banana plant. It is one third the height of your standard banana 'stem' so I'm delighted to have such botanical utility on hand.
Such a compact item will fit in anywhere.

Anecdote: 'My neighbor' has a great garden so we got to talking about how he built up his soil -- as one does here where I live 'cause it's sand all the way down. "Seaweed", he says -- and he named a beach north of town where it always collects and washes up. "Ah, right," says I, who is also a seaweed collector. But then he says the gov environment guys visited him at home to inform him that collecting seaweed is a no-no. At hom they came a knocking! How absurd is that when the local council has to grade the beaches here to remove the rotting stench of the red seaweed that washes up this time of year. It's slippery and slimy and cakes the sand up to the high tide line. Within its putrid depths lurk the dreaded sand flies... I fill  a bag of what may come my way when I'm out and about and he says that he does the midnight run. I'm sure the right to washed up seaweed must be listed in some international freedom charter some where. It's like fire wood or mushrooms.

To go with my nanna I built the first of the trellises I had in mind. (See: Summer Heat, Bean Trellises and Palm Fronds.)
My trellis is a scaffold made from feral bamboo canes with a shelf two metres above the ground.
I've thrown palm fronds atop this as I wait to see what happens in the next big blow.


I'm thinking that all I need is a time window so that beans and other climbers can grow to clamber over the frame  to root it and supply shade below. Then I need only add the fronds selectively during the Summer bolting-to-seed season. I hope  to not go down the thatching route as any attaching would offer  the wind traction to pull my structure apart.
While I expect the fronds to sail away with the wind, that's no big deal. So long as I don't attach them to the trellis, I maybe get to keep it.


The impression is that I've interior decorated the backyard and gone  islander style.
Once I'd built the trellis I realised that if I built one for each bed -- and that's a lot of bamboo harvesting: 15-20 canes for each 5 metre long bed! -- the nature of the garden changes dramatically.
I can now go 'up' easily and hang my vegetables aloft while the mix of trellis and climbing plants will act as a wind break on  sensitive items below.
The design I'm replicating -- simple though it is -- is a sort of Swiss Army Knife  for the vegetable garden.
It's like all my Christmases have come at once. No more staking. Whatever I may grow I can 'support' if required by leaning a cane against this structure in the same way that a broom rests against a wall. I don't even need to deep bury an end or tie  a pole into place.
I can't wait to get going with some more beans to see me through Summer. Snake beans  survive the Summer here, but require a tall trellis.
Voila! That I got.
Other fresh beans are not so happy in the heat so I'm hoping to utilize shading so I  can crop them .
Already I've planted choko to my trellis and will add Ceylon Spinach  (another Summer stalwart although I dislike its glutinous nature) and see how far I can reach with climbing cucumbers. You'll note that using lean-to ascending struts should suit cucumber growing.
The growing permutations with a trellis like this are limited only by my imagination (and bamboo supply).
I am reminded of  the inner suburbs of Melbourne before gentrification where the backyards of so many Italian and Greek  migrants  always had structures built above the garden beds -- beds more often than not between cement paths. Along these trellises were grown grape and passionfruit vines as all space every which way was harnessed to the harvest.
Maybe my trellis will one day get a makeover and become permanent. But for now: free, easily cut and harvested bamboo -- which will rot away but is easily replaced..
GARDEN NOTES/UPDATES

Afterward:The alternative is to use a Permaculture approach and grow climbing plants over other plants. Been there. Done that.  My complication is that I have to concentrate my soil making and formatting my gardening into management level plots requires a certain schematic rigidity to layout -- neither feral nor free form planting.  My primary interest is shade and to get enough shade from 'other plants' so that I can control how much sunshine and how much shade on a day to day basis isn't  possible with tandem planting. Similarly the plants I'd need to grow for climbing upon aren't the ones I want to necessarily eat. I don't grow corn but I grow sunflowers. I love growing sunflowers but because I like to bunch them up there's not much room for other stuff.
Catch up Report: After another session harvesting bamboo I extended my trellising to another few beds and gave myself over to the dynamic logic of the enterprise. While I'll need more bamboo harvesting time -- and spending time in a bamboo grove is very Zen, hacking away, I assure you -- the impact on my patch has been extraordinary. The environment has changed drastically just with the poles and cross pieces and a few fronds. I planted chockoes in each bed and got myself some climbing bean seeds. I'll experiment with zuchini and cucumbers as climber candidates. I have also tracked down an Italian climber vine that is used in soups and pasta dishes: Tenerumi -- a Sicilian Squash. I may also plant one grape vine as that, while perennial,  is deciduous.

Water upkeep: I've also been laying down more newspaper on my garden 'paths' which serve as sponge/vertical mulch troughs.(See: Growing a meal on sandy soils ). Mulching beds like this -- thick newspaper or cardboard layers covered with grass clippings -- along the paths between my garden beds really hold the water in a way the beds do not. While these new layerings haven't broken down yet, I suspect I've become paper obsessed and am burying papers and cardboards in cooee of anything that grows. I dug a deep trough near the banana I planted. And the 'ditches' I had dug for my pawpaw circle beds three months ago (and filled with newspapers and brush cuttings)are now musty and full of compost matter enough for me to plant sweet potato in them today. While the standard approach in gardening is to fret over  your garden beds I've gone  lateral and am now caught up in making the best use of my pathways as passive irrigation ditches. Water  stays put longer in these paper sponges and I'm beginning to wonder if I should be watering these  troughs rather than the beds themselves. How much paper can I lay down without leeching too much Nitrogen from the beds nearby -- as its break down has an input quotient?

Comment by Donna on October 18, 2011 at 19:32
My comfrey plants are flourishing now, they seem to much prefer the shade.  I am currently trying to make a border around my banana plants.  Do you think it would be alright under all fruit trees, I was a bit concerned about the root systems being potentially invasive - especially to shallow rooted trees?

Comment by Elaine de Saxe on October 18, 2011 at 12:02
Donnas suggestion ;-) Michelle on this site (and a neighbour of yours) grows a Comfrey plant under each fruit tree and buries the leaves on a continuing basis. It's a great idea and one I'm getting to implementing.

No not Lyngbia. It starts off brown and is seasonal rather than relying on extreme conditions. Now the stuff is a dry cake on the beaches where it collects -- just like sushi seaweed -- so it will be lighter to collect. Over Summer seagrass -- Dugong and Turtle tucker -- is washed up.

Comfry? Just planted some mainly for my chooks but will also bury some as per your suggestion.

Dave - what brilliant ideas! Nothing like a good bit of lateral thinking ;-)

That Seaweed and the bureaucratic visit ... is the red stinky stuff Lyngbia? If it is then it's possibly toxic and it might be the reason the council moves it off the beaches. Although I have heard that we gardeners are no longer allowed to remove Seaweed. But Seaweed, green benign stuff which is a powerhouse of nutrients and red Lyngbia are quite different plants.

Comment by Donna on October 17, 2011 at 15:31
Wonder if you add a layer of comfrey to the bottom of your trenches it would be more beneficial, when I steal your idea that's what I will be doing!  If you don't have any comfrey let me know and I will happily send you some (PM me your address) -  they grow so easily from bits of the root that it is a disgrace how much they cost!