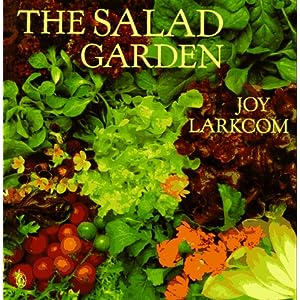 Since I eat a garden salad every day I have made it a habit to make up my salad dressings ahead. I use old caper and anchovy jars that are maybe no more than 150 ml in volume and throw in -- aside from the requisite 2:1 (give or take) virgin olive oil:vinegar mix -- whatever takes my fancy: capers, garlic, spices, kalamata olives, etcetera. Makes the salad simply a business of picking the greens and tossing.
By hand?
By hand.
Bugger this sterility fetish for using cutlery  to toss!
The vinegar in your salad is your Dettol.
My addiction to salads while so very Mediterranean is also buoyed up by the work of Joy Larkom whose The Salad Garden is  a standard reference on the business of growing and cutting  salad vegetables so that they 'come again'. It's all about salading it simply and freshly without making up concoctions.
Only medleys.
So my favorite salad is salad de jour  -- what happens. What's on hand. What's there. What can be picked...and eaten pronto.
When you consider that so much of the salad tradition has relied on the harvesting of weeds -- it always has to be about going for a walk and picking what is green and fresh (but not poisonous).

"We have said how necessary it is that in the composure of a sallet, every plant should come in to bear its part, without being overpower'd by some herb of a stronger taste, so as to endanger the native sapor and virtue of the rest; but fall into their places, like the notes in music, in which there should be nothing harsh or grating: And though admitting some discords (to distinguish and illustrate the rest) striking in all the more sprightly, and sometimes gentler notes, reconcile all dissonances, and melt them into an agreeable composition."--John Evelyn, ‘Acetaria: A Discourse of Sallets’ (1699)

And since we are name dropping  food writers  with something to say: No one better than Elizabeth David:

“I don't altogether agree that a plain green salad ever becomes a bore - not, that is, if it's made with fresh, well-drained crisp greenstuff and a properly seasoned dressing of good-quality olive oil and a sound wine vinegar. But I do agree that all this talk about 'tossed salads' is a bore; it seems to me that a salad and its dressing are things we should take more or less for granted at a meal, like bread and salt; and not carry on about them.” -- Elizabeth David (1913-1992) ‘The Spectator’, 1961

Yes. Oh yes. That's the ticket.
After years of being fed and schooled by the cuisine preferences of the Middle East -- and there 'salads' -- Salatat -- aren't by default, green -- I defer to the complication that vinegar is a fermented  substance  so the oh so simple mix of oil and vinegar is not so easily replicated by the regional reliance on lemon juice. The Islamic proscription against alcohol comes at a culinary price. There, salads have morphed into 'cold vegetable dishes' that enrich the Mezze table.
But they aren't green salads...despite their niceness.
So the real business of making a salad -- once the weeds have been collected -- is the oil and the vinegar coating. Aside from all the extra virgin olive oil  thingey -- I have to confess that I am an absolute white wine vinegar aficionado. I have yet to find a red wine vinegar that zings a green weed. Drown it, red wine vinegar  will. But zing it? No.
I guess its about how you make chlorophyll work for you.

would be even better in the discussion forum ;)

Comment by Elaine de Saxe on October 31, 2011 at 6:49
Or organic cider vinegar, Melrose brand is widely available. Great blog, your passion shines through :-)