I thought I'd best stop hijacking Mr Riley's blog with my Turkey saga.

You'll recall the story so far:

Hey Dianne, I don't expect Bobbie to pick the difference between a turkey and chook.  But, he is actually quite suspicious of our new visitor.  I'm gonna git me a gun! (well, a water one).

Hear that Dave?!  Now we get to blast things with water guns! We can't set fire to them - but maybe some wee in that gun?

Elaine's right -- as she so often is: water pistol weaponry. Some suggestions that using strong odors and chilli powder  or coating the soil in mesh wire will work.

One guy in aleafy Brisbane burb used plastic pink flamingos to good effect. Raised em high so that they threatened to swoop. 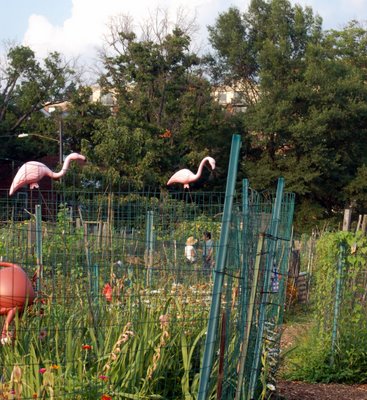 You have treated these dogs like too much of the family, they just don't know their role in life. Good on You....

I have a young one as well, for the first time this year.  Luckily, it's been distracted by the spilled grain around the chicken coop (I bet it gives my girls lice!), but it's also digging around out the front.  Heaven help me when it discovers the raised beds.  Young Bobbie (my dog) has proved a big disappointment in the turkey chasing stakes.

The Bush Turkey that scrapes mulch is the male. Suggest arming yourself with a water pistol and wetting the thing. The only real way to deal with it (apart from killing it which is not allowed unless you can find a sneaky way of doing it) is to erect a 2metre high fence around the garden. Having a lid on it helps too. It's a big ask with your extensive garden, hence the water pistol suggestion. Assuming you can find or build one.

I am so lucky I don't have a Bush Turkey in the garden but the Rainbow Lorikeets & Sulphur Crested are driving me mad. I Have an Elaeocarpus grandis (Blue Quandong) and they come for the flowers and small nuts whilst at the same time chewing off small branches, and what is under the tree (that is as high as a 3 story house), the Vegi Garden. The birds come in about 3 times a day so I have a mess to clean up as often.

Would love to see a Write Up on the 'Spinaches'. Tonight we are having a Boneless Lamb Roast stuffed with Warrigal Greens, Onion, Ginger Mint and Pine Nuts. I just love finding out about all the different greens I can grow and eat. Thanks for your input.

Tragically my garden has been recently discovered by the town's Bush Turkey who now thinks he/she is in bliss: mulch, verdant habitat, up and down beds...

Every day it comes to visit. And it comes back if chased away.

My dogs are useless.

It's me vs the bird.

The Coyote and The Roadrunner.

Every morning I get up to feed the chooks and every morning now there's a Bush Turkey rummaging in my vegetable garden. So every morning I'm chasing the bird around like a witch with a broom. But I don't have a broom so my martial arts skills kicked in this morning as I picked chokoes and three them at the bird.
BAM! Take that you poultry marauder! BIFF!
It jumped the fence but was back in 20 minutes.
So I picked up one of the dogs and went hunting with it in my arms.
I was gonna say: Look! Attack that!
But the darn bird was no where to be seen...

But I'm not allowed to kill this poultry.It being fauna ...(and besides there's only two in the whole town -- they live in the school grounds. Peacocks own the swamp -- TRUE! -- and we're Bird Central. An avian hub. So you can't begrudge any species.). 'Turkey' is not derivative of menu attributes... The bugger was back this afternoon and I picked up the Jack Russell and gave chase...thinking it's like carrying a machine gun in a violin case. If it was a Blue Tongue Lizard or rodent he'd stiffen and struggle to get at it. But birds...After all these years I've given so much to canines. Walked them. Picked up their poo. Squeezed their anal glands...all the good times we've shared-- you'd think there would be some pay back,I could count on. One bird. Just one bird dealt with is all I ask....

Yes it is a chicken obsession here too...as well as mine, my neighbor has a coop two doors down. So for the turkey it's like  going out clubbing by jumping fences.

But no matter how often I chase it out of the garden EACH DAY it comes back in quick time.

It even jumped up on my seed trays and pots, and savaged those for some reason.

Mine -- I guess, fortunately -- seems to be female.

I've yet to locate a suitable volumed water pistol as my target range across the mounds and beds has to be at least 6 metres. Then I'd have to keep it primed and loaded outback so I could arm myself quickly when the bird is spotted.

As it is I'm running out of ammunition on hand to throw at the bird. I also have a metal sheet outback and I shake  it like a Wobble Board -- as used famously by the pedophile Rolf Harris in his songs.

Tragically I suspect I am sure to be frustrated and am monitoring its scratch sites so I can fathom its  feeding logic. I'm thinking that green mulching may be a distraction as would be the insertion of stakes like Punji sticks -- POULTRY AWAY! (®) Hypothetical Defenses Against the Ravages of Bush Turkeys

... On newly planted beds, maybe I should lay down chicken wire on the soil and plant in the hexagons.

But compared to chooks out and about -- the damage frenzy is much less.They dig like marsupials or rabbits: one spot for a shallow trench, then move on --- whereas chickens will strip a whole bed of plants and mulch cover.

Nonetheless, herein rests a warning. The Bush Turkey (Alectura lathami) is on the march. They have invaded Sydney in huge numbers and here in Brisbane the population has exploded by 700% these last 30 years.  The onward march of the turkey means that every backyard is not safe. every home is threatened. The  more you go green, the greater the risk. With each embrace of an organic protocol, the turkey comes closer...closer...closer.... until it moves in. And Nature red of tooth and claw is at your doorstep....

Sounds like the neighbours (cute story) need to feed dear Percy a bit more to keep him at home. Or get some "flock" of their own.

I've never heard of anyone adopting a bush turkey before and loving it - only every heard expletives when people talk about their resident bush turkey and that includes my elderly Mum on Bribie. She hates them with a vengeance. Uses lots of colourful words to describe them.

I'll tell her about your pee experiment and get her a water pistol if you find it works.

It's a very youngish bush turkey.  Bloody thing has an identity crisis!  Oh, and a very long neck - it's head now reaches under the coop door (thanks to Tunnel A) and can pick up any spilled grain.  It has no fear - not of me nor Bobbie or the people across the road's cat.

So, yesterday the cutest damn kid rides over from his house across the road.  "My turkey is in your yard."

Him: Can you send him home?

Me:  I wish he would go home. He doesn't do what he's told.  He likes to play with my chickens in the backyard.

Him: We have 5 children in my family (at which point, another two actually turn up).

Much childish chatter ensues until the tiny weeny girl says "His name is Percy.  He was borned in our yard."

Today, Percy managed almost to dig under my chicken coup in order to "join his flock."  Thanks Percy, but if you get in, they can get out.  Goodbye vege beds.

Oddly, Percy is so desperate to join his flock, he is doing no damage at all to my gardens, except for Tunnel A under the coup door.  I've blocked it with a hefty chunk of wood post leftover from the old recyled fence.

Are you talking about a regular domestic Turkey or a native brush (or bush) turkey?