Sponge Garden under the trellis 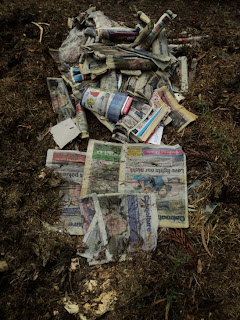 Aside from some rare references on line and a review of the method in the water harvesting works of Brad Lancaster there is not much information to be had about 'sponge gardening' (aka 'vertical mulching').
There's even less about harnessing newspaper as 'sponge' material.
As I have written before -- here and here -- I deploy a lot of newspaper in my vegetable garden. I, in fact, 'paper' the garden with newsprint.
On sandy soils papering is my way of creating sponges to hold water and protect soil biota.
I started as we all might do with the newspaper-plus-mulch technique of weed suppression. But now, I am covering my newspaperings with grass clippings  not so much as herbicide, but  to (a) stop the sheets blowing away and to (b) add a source of Nitrogen to assist the break down of the paper without local leeching. As I experiment more aggressively with deeper layers of paper over the soil between the garden beds, newspaper becomes a crucial tool.

I now have rivers of paper running  like a grid throughout my garden -- laid down where the paths are. This is a thick lasagna layer almost 2 inches/5 cm thick. My protocol is that every now and then (eg: twice yearly at least) I add more newspaper (and grass clippings) as the old layers beak down.  I keep manuring the parallel beds in order, among other reasons, to keep Nitrogen levels up.
It's carpet gardening or, in reference to natural systems, 'perched' gardening.

perched lake:A lake that is isolated above the groundwater table by a layer of rock or organic material. Perched lakes can occur in depressions where an impermeable layer has formed in the soils near the surface. These layers develop as a result of chemical reactions between the soil and water and gradually precipitate organic and inorganic matter in the soil profile. The precipitated matter eventually forms an impermeable layer, preventing water from percolating to the water table. The depression will then retain rainfall and runoff and a lake will form that is ‘perched’ above the water table.
Brown Lake on North Stadbroke Island is an example of a perched lake.

There's a lot of spin in gardening discourse. You are told to add this and buy that. But the best approach is to use what you can get and recycle rather than what you may have to buy in -- and I can get grass clippings and newspapers in a seeming endless supply so I'm building my garden out of  those core elements.

Where months ago I'd dug vertical holes -- up to half a metre deep -- and piled in newspaper, cardboard packaging and grass clippings plus a handfull of manure -- today there is a  lot of exciting biological activity: a thick mulchy, wet sponge occupied by a range of soil critters of the kind you'd expect to find on a forest floor.
Colonisation runs in stages: ants, slaters, termites, (as moisture consolidates) grubs   and worms... Depending on weather, and moisture content especially, the process takes months as the break down -- the rotting -- occurs. When the hole or trench implodes as the paper structure collapses and falls in on itself, grass clippings and leaves fill up the spaced to carpet the depression in the soil. Underneath the  soil is soggy and any trench dug may be a walking hazard if you don't know its location. The hole becomes a bona fide sink and when hand watering, I run the hose into it to wet it.

I also throw into these trenches old bones and dead cane toads (imported from my freezer where I've 'put them to eternal sleep').
Later I developed the technique of digging shallow trenches along the edges of the garden beds and burying rolled up newspapers like one long paper tube. These acted as a spongy frame around each garden bed.
However, I suspect my single layer  tubing wasn't deep enough. The ease with which the paper rots and merges with the surrounding sand suggests that one layer deep and one layer thick  in itself isn't sufficient.

Now, as I develop confidence in the methodology I'm making the paper layers on the paths thicker by laying down more newspaper over what has been spread out before.
I suspect there is an optimum thickness that is season and moisture dependent so I have to keep checking underneath this sheeting to see what is happening below. Too much 'fresh' newspaper and the water will run off and the Nitrogen demand may exhaust the local soil.
Since I am on flat sandy ground I cannot harness gravity to good effect so these papered walks are sponge sinks that are designed to hold moisture above the sand longer that the  beds next door. 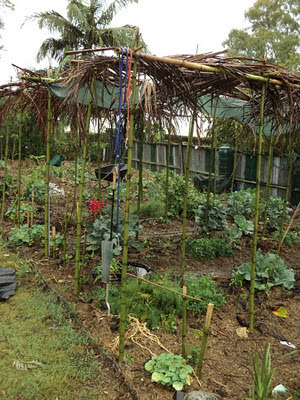 In sync with the paper burying I've been extending my trellises. I prefer to use  palm fronds as shade on these as they don't catch the wind and pull at the structure as attached shade cloth does. The fronds are also easy throwaway for mulching after seasonal use. They are also free.
I weave the fronds in and out of the trellis frame  to locate shade where I want and don't want it to fall. So the fronds make shade very customisable in my shade boutique.
This is in contrast to the method of relying on companion planting  using taller plants(eg: sweet corn)  or trees as shade sources. With a trellis -- even if it is climbed over by plants -- you have much more control over shade and light.

My 2 metre high trellis is also very versatile as I can grow climbers up poles resting any which way without having to stoop while gardening beneath or putting in a new standalone structure. Most trellis systems I think aren't tall enough. Since my garden runs north south I'm deploying lean-to effect on the northern and southern aspects in order to give myself shade options through the Summer heat.
Underneath the environment has  experienced  a climate change.  I didn't expect the impact a few poles strung together could have on what it felt like in mottled shade. The air is cooler. There's less dry out of the mulch and soil. There is more stable environment throughout the day: less in the way of extremes. I also have a sense of working not just in horizontal mode. The garden has 'risen up' and seems ready to hang and clamber. It becomes more a forest rather than a succession of beds.
I haven't finished the structure yet as I have more canes to harvest and erect, but I have sown beans, choko and cucumbers so that they can start their climb skywards.

Comment by Dave Riley on October 18, 2011 at 9:04
I don't compost. I'm lazy (and I have chickens who do the work for me). So burying newsprint is a funerary I can relate to.Cardboard is another resource of course, but its harder to compact up and lay truly flat. And the way [aper is delivers -- rolled up tight -- is useful in itself.