Of late I've been investing energy 'renovating' the school garden while 'maintaining' my own. That doesn't mean I've been neglecting my own patch.

Indeed the effort has served to offer me a comparison.

When I look at my own outback it keeps changing each year, each season, each month.If I didn't keep an inventory and map in my head I'd lose my gardening way.

Mine is a very (very!) mixed planted garden. Different vegetables and herbs are cheek to jowl  -- assuming plants had faces.Now that I've installed a spear pump and sprinklers anything now is possible.

At the moment the Vetiver clumps are taking off so I have this intense sense of expectancy that the next change is sure to be awesome.

If I keep the mulching up this is a very easy garden to manage. Little weeding and happy plants -- if they get plenty of water.

I get Cucurbita fungi but that's a given. I can rule that what the pundits say about multi cropping is true: the bugs don't know what's what when you confuse them with miscellany.

To give you an idea of the mix I thought I'd offer a list of what's growing:

The only regular fresh fruit and veg purchase we have to bring in are carrots and stem celery. Also fruits for the partner's breakfast.

Assuming, that is, I remember where everything is growing and ready to harvest.

But then, once upon a time, 7 years ago we started with this: And the plants live happily together ever after.

I planted out some seedlings yesterday as was my want. But while I was down on my knees I was overwhelmed by the verdant growth. The weather and the extra kick of H2O has done wonders for the plants' lives.

They're happy and tall -- clambering about and climbing.

It may not be a formal potager but it sure is a beautiful place -- even if it is alive with Triffid wannabees.

On that -- on the recipe thing -- we had mashed potato last night and some was left over. Now there's mashed potato and there's poached eggs and the trick is to combine them 'coddled style' in a wee ramekin so that the egg cooks on top of the mash. you can also use glass jars.

Water half way up the sides. Lid on the ramekin/coddler/jar or on the pan rim.

Real ceramic  coddlers are too expensive and hard to clean I reckon.

My chooks are being far too bountiful at the moment and we have to egg out more. So this is one of my favs.

Absolutely delicious with a soft poached egg and a slice of toast 'soldiers'.

Your garden is fabulous Dave as usual. Only wish I could be as productive as you both in the garden and your spirit (for the earth is incredible). You are truly a marvel. Keep it up we always know you will have some handy info and recipes for us, showing the use of what you grow.

Today I sprayed the weeds out front (vinegar+salt+borax), trimmed back the Jasmine over the front gate (now that the bees have left the plant alone) and planted seeds of agati, tamarillo, feijoa and pigeon peas in my wee pots.

But the Still To Do beckons...

I have more seedlings to plant out and i want to methodically go over every square metre of garden so I know what's a'happening in the jungle outback.That way I'll know what harvests to expect.

Lining up to join the earth are corn, parsley, pawpaw, cucumber,pole bean,sunflower and potato.

I usually mark each seedling with a stick or twig so I know where it is during its early life in the world of dirt.

I am developing this stick thing into a code starting with the spuds. When they come up, I mark the spot with a stick flagged on top with white electrical tape so that when the leafery dies back, I'll know where to dig for the harvest. That way i find that potatoes will keenly grow among the other flora.  The stick has to be at least 30 cm high otherwise the 'X'  spot is lost in the mix.

With the beans and other climbs , I force a longer limb next to the seedling so that it has a stairway to the heaven of my stomach. Once the plant reaches the top of the stick I have the option of dropping twine from the aerial leads above that crisscross my garden.

My preferred sticks are the harvested/cut branches of mulberries but I also use old bamboo canes (you can never have too many of those) whose primary function is to hold the aerials aloft. Other climbing stations in situ  are the frangipanis, pigeon peas and the Vetiver clumps.

I've also used many of the frangipanis to support Dragon Fruit.

As it is, I have some gregarious squashes -- like Tatume -- yams and Jack Beans (Canavalia rosea) clambering all over the place. But I gotta say that this year the Warrigal Greens have really come into their own as a ground cover. So manageable and thickly matted. Break off a piece and replant it: Voila! Tolerates the shady parts of the garden too.

Nonetheless the Jack Beans have only just taken off. Yesterday, I collected a few seeds of Beach Pea (Vigna marina) and will be trialing that.It is so very similar to Jack Bean but has a yellow rather than a purply blue flower

I do have fruit trees but I'm careful as much of what I have planted in the past has not survived.I just planted a banana in hope.

You are a good example for us to follow. So much growing in a small backyard.  Do you have any fruit trees- bananas  or grape vines.  Maybe a compass would be handy as you transverse your garden and a whistle for Helen.

Helen lost me in the garden yesterday. What with the corn, vetiver, climbers , frangipanis...and sundries the patch has taken off big time.

I need to sickle back the paths so that I can continue to enjoy transit or to remind myself where the house is.

Regrettably, without the fruits, it's almost a case of 'if you've seen one Cucurbitat, you've seen them all'. So who knows what is out there and what happens when my back is turned? 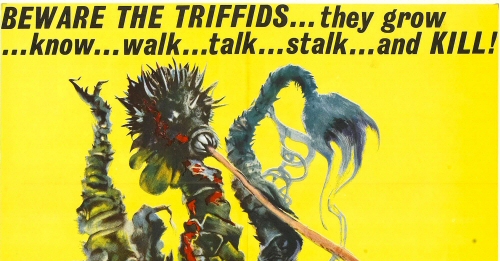 Let us not, however, flatter ourselves overmuch on account of our human victories over nature. For each such victory nature takes its revenge on us.