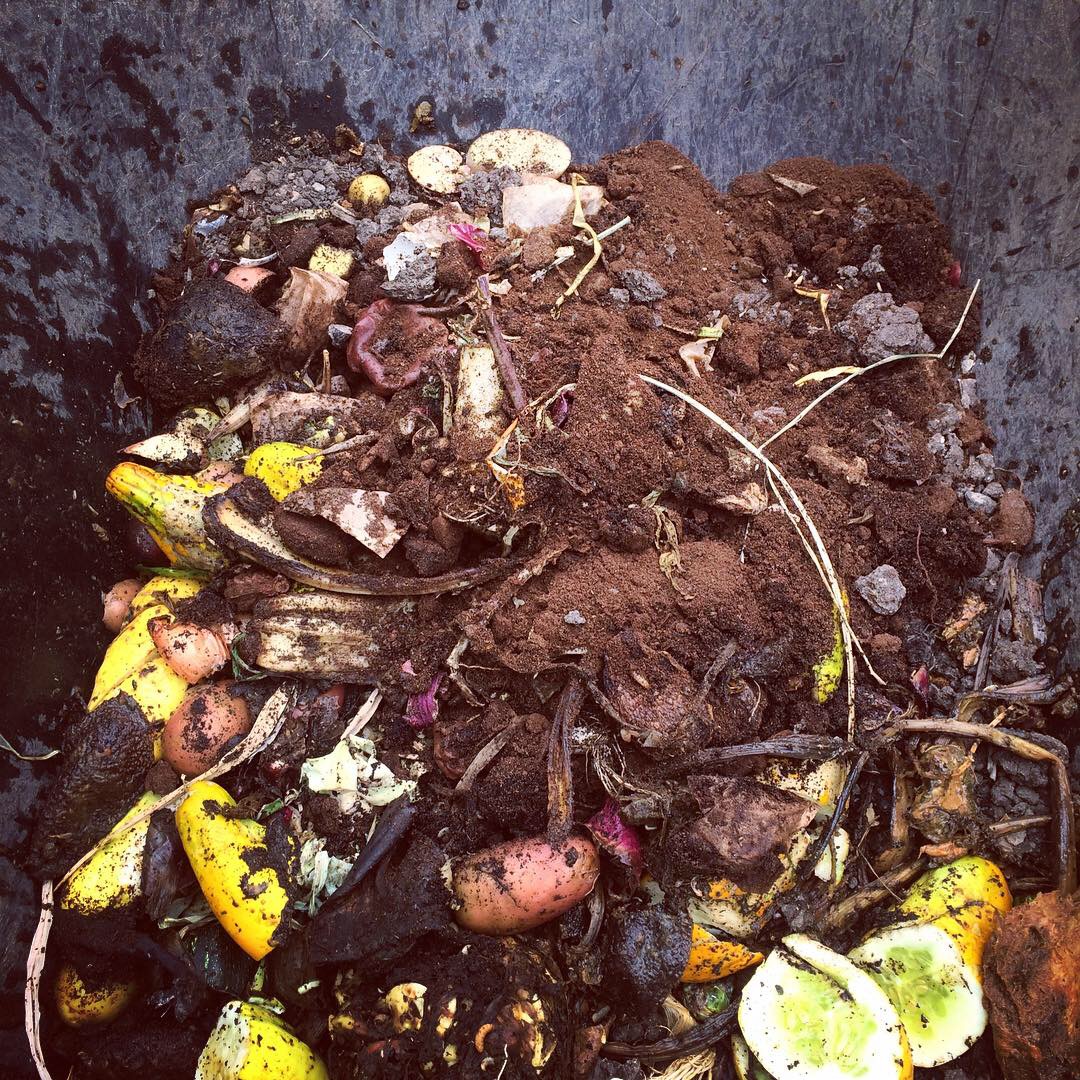 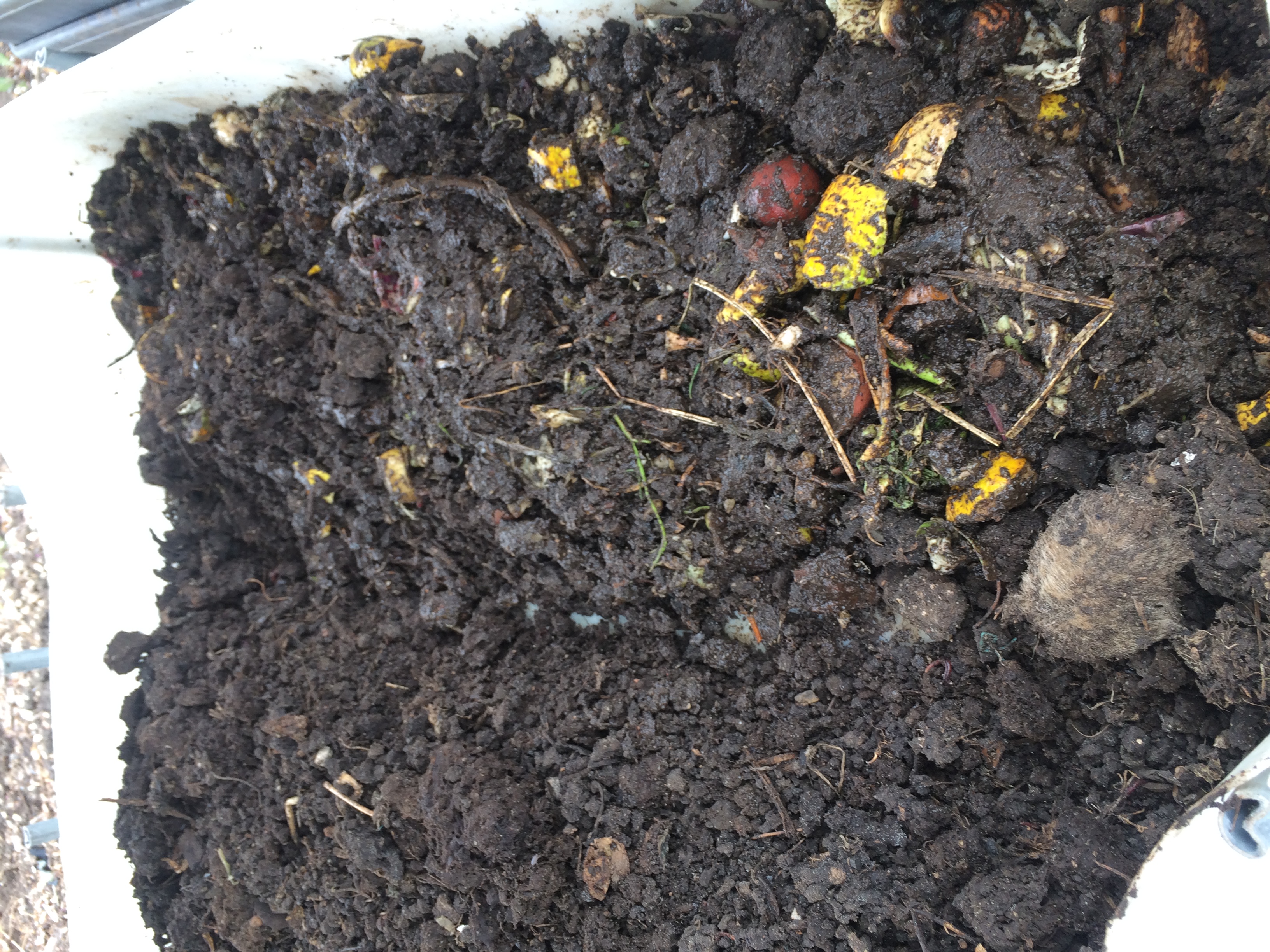 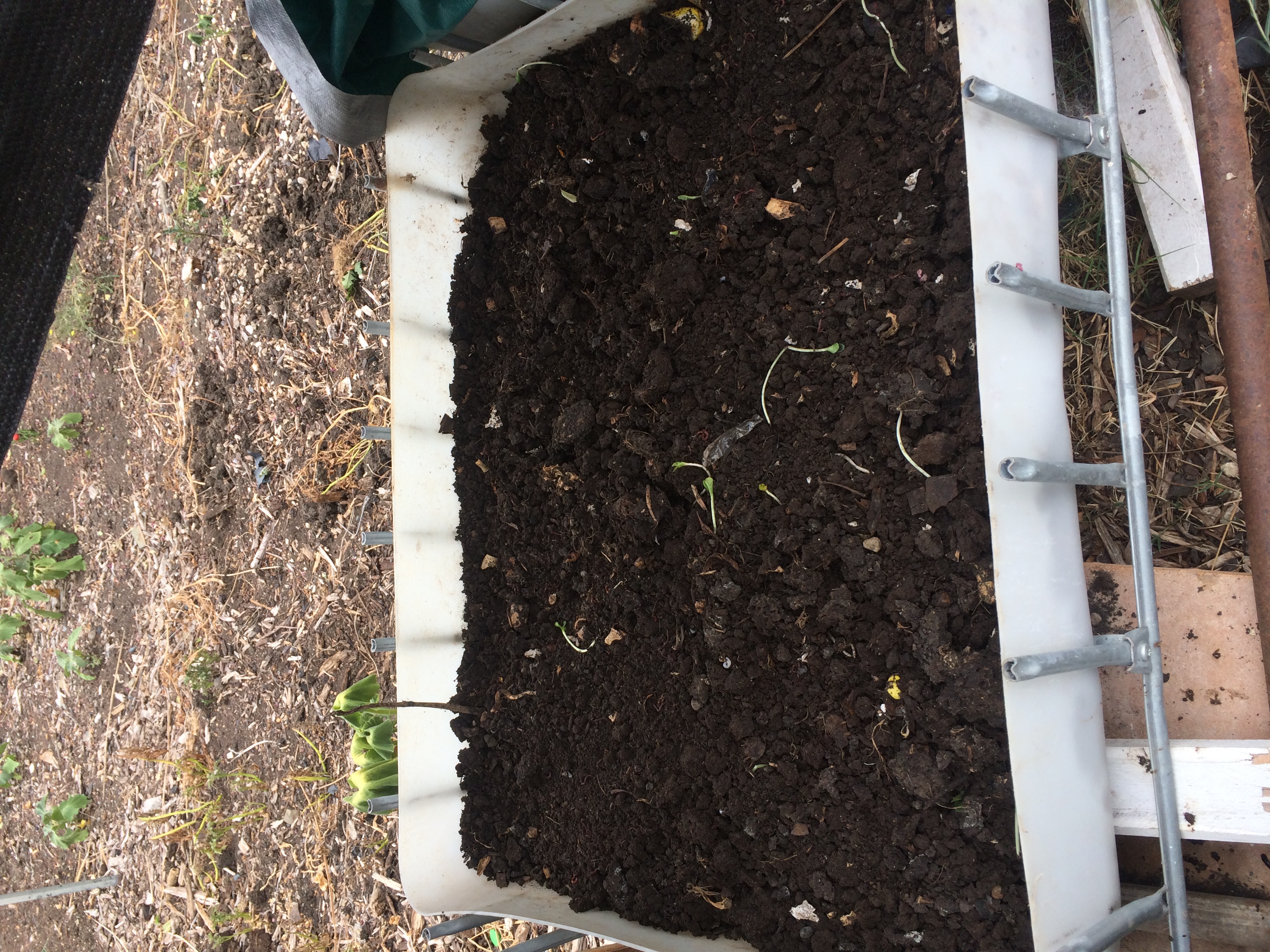 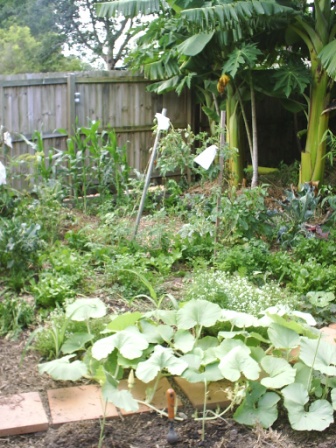 Just back from visiting Christopher's garden. Thanks heaps Chris, I really enjoyed the visit. It was great to check out how you organise things and how your plants grow in different spots. Lovely cup of tea too. I've brought home a lot of seeds to try out - thanks seed savers - and thankyou Donna for the books. I've potted up Christopher's cardamon already and put the ginger straight in - I have just the spot for it as I have been meaning to plant some of my Food Connnect ginger for some time. It was interesting to discover that I don't have galangal after all - I have turmeric (I had planted both and couldn't remember from the pictures on the net which one had come up). So it is my turmeric that is flowering.I've planted the gingers etc down the side on the lush side of the house. It gets midday sun only (south side) and washing machine outfall, so it's lovely growing conditions for many semi-shade lovers. 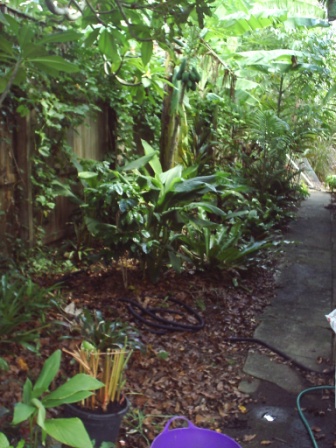 Down this side are: three lady finger bananas, a passionfruit, four pawpaws, three pineapples (too shady to flower? maybe), three coffee bushes, turmeric, an avocado tree (which I plan to prune small) and now ginger. I also have lots of ornamentals - mostly house plants which I had carried around in pots for years. I've planted heliconias for cut flowers, and I planted out a taro yesterday as well, although I'll have to keep the washing machine hose on it as taro probably prefers a wetter environment than this would be if it wasn't irrigated.At the top of the lush area is my macadamia tree - otherwise known as "the potting shed". I've transplanted a bunch of macadamia seedlings to tube stock. I'll share some around once they settle in. 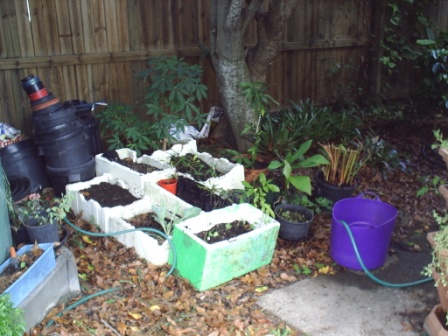 The tank is just here which is convenient, and the plants are in filtered sun all day, so I don't lose them. Some of them tend to be a bit lush and weak but I gradually move them out into more light (called "hardening up") before I transplant them into the garden. Sometimes I just let seedlings sit here and sulk for ages and then plant them out several weeks apart = easy succession planting (although many things will bolt straight away if you do this - it works for silverbeet and the onion family and sometimes lettuce, but usually not the cabbage family unless you are very quick - ie a week or two between plantings out).I cut some stalks out of the lemongrass bush and made lemon grass "sets" (ie single stalks with roots on the bottom - note you need to remove the leaves so the roots aren't desperately trying to pump water up to them and can instead concentrate on new root growth; just make sure you leave the tip ready to shoot again). I have planted the sets all around the vegie garden. Lemongrass makes a good root barrier to lawn. Let's see how it goes, I have my fingers crossed. The garden is coming good with the rain and my watering can attentions. At the moment I can use the hose from my full rainwater tank - the joy! I have investigated a pump. It's on the list.I have applied fruit fly exclusion bags to the tomatoes. I also set a bait lure for the male fruit flies and there were 15 in it the very next morning! Yoiks. Take that you little yellow flies of annoyance. I will have to become accustomed to checking the bags to see if the fruit is ripe and replacing them if not - sort of fiddly and annoying, but I will try it. I was assuming the bags would be transparent, but there you go. 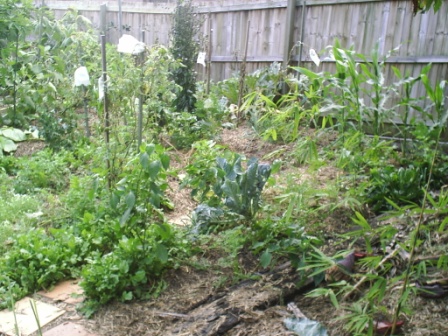 You can see the bamboo is coming good - it has a new shoot which is encouraging. It was $50, so I'm glad it survived the summer without me (thankyou to my friends who kept an eye on it for me!). The culms will make good garden stakes when mature.I planted out some cassava - am hoping to shade the sunny bed, it's getting fried. Even the manky shade cloth isn't enough. I should probably just leave it fallow in summer. The cassava will interfere with the clothesline, but I'm considering fixing the clothesline so it can't rotate, and then it won't be a problem. Whilst I was fussing with lemongrass, my partner Andrew spent the day digging up the driveway with a crow bar. We are going to plant sweet potato down the middle of the driveway. There are several reasons for this. Primarily we need more tubers than we're getting from the banana pawpaw circle. Tubers really are a staple food, very important if you're attempting to feed a family from the garden. Secondly, we've been trying to keep the driveway mulched but the grass keeps busting through which annoys me as I am trying very hard to be lawn free (such a waste of time in which I could be gardening properly and lawnmowers are smelly and noisy, not something I actually want to spend time with). Thirdly, I think it will look good. Fourthly, we are trying to preserve the function of the driveway for deliveries etc, so whatever we plant must be drive-over-able. Fifthly, we want to construct a grape arbour down this side of the house (north facing - hence the shadecloth) and whatever we plant must be somewhat shade tolerant as well. So the sweet potatoes seem like the perfect (only?) choice. Next to the fence we have Gotu Kola (Centella asiatica) as a ground cover = Arthritis Herb. I highly recommend this herb for anyone who suffers inflammatory/ arthritis type conditions. It really does work: eat three leaves a day. 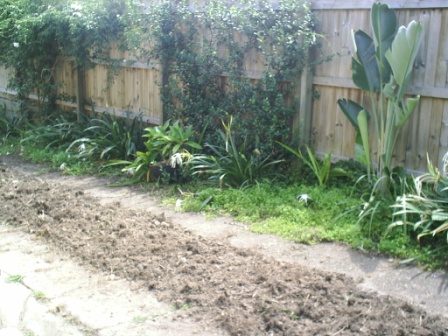 Our banana pawpaw circle is lovely now. It has become the new home for the worm farms. I just leave the taps open and they drain into the circle. The circle is one metre deep and we fill it constantly with all of the prunings from the garden (old banana stalks etc). It just digests down and the pile never grows (sometimes it shrinks, but never for long before I produce more food for it). I never water the bananas and pawpaws, they feed themselves from the circle. It's a great design, I'm very pleased with it. Very sensible. Here we have just filled it again with new prunings - it was almost at ground level. I try to keep all the suckers except one trimmed off all of the bananas, which is a frequent recurrent task. You can poison them with kero I know, but I choose to get some exercise instead. I've planted a yam at the back of it. It only grew to be about 5 kg last year. I wonder how big it might be this year? I will experiment again with yam recipes - I had mixed success last year with my spicy yam balls.happy gardening people SJP
Read more…