Out the front:  the building patch is still doing bugger all, in fact, it's mostly ornamental now.  The Mulberry seems to be thriving (although not right now due to winter).  The blood orange is dead.  The sugar cane is a real standout which I didn't expect.  The cumquats are being wasted because I have no room to freeze them since I shut down the second fridge.  The roses are doing well.  Native bees are flourishing.

We did well with passionfruit again but it's finished now.  The Paw Paw has been removed (I have two beside the garage that are doing well).  I am now the proud owner of three banana trees.

Silverbeet and spinach are going really well and I have been in cherry tomatoes for months now.  The bell chilies have finished up but the Hallapinios have started replacing them.  I have a another year's supply of dried tumeric, chilie and undried ginger which is great.  Rosemary is doing fine.

New crop this year has been the Madagasca bean.  I am coming into crop 2 this year and am really enjoying them. Note to self: cut the damn thing back after this crop!

There is no sun on this side of the yard in winter!

Garlic does nothing.  The tuber bed (Yackon and Sweet Potato) are about to be harvested. I see evidence of tubers so I'm hoping for a good crop.  The Gooseberry is back with a vengence and producing well - about to make ginger and gooseberry jam again.

Chickens, quails, worms and fish are doing well.  I am egg self sufficient.   The quails are providing heaps of fertilizer.  We did okay from the fruit trees - 8 manderins, a few lemons and about 8 lemonades.  I think the fig needs to be moved to a sunnier part of the yard.

Little Beny has an amazing ability to harvest lawn grubs.  The chooks love it!

Out the front:  the building patch is slowly coming to life.  The blood orange remains (but is doing nothing - it needs to be moved) and the little mulberry seems to have sprung back to life.  I might even get some fruit from it.   The cumquats are still used for cumquatcello but the cumquat lemonade experiment should come to fruition in another month.  I have lots of cumquats frozen.  The new roses are great - I didn't expect the two flowers (on about 6 bushes) that I got, given the brief age of the bushes.

Snow peas did not perform at all this year.  LOTS of passionfruit on the vines.  Lots of Paw Paws on the trees. The sweet leaf was cut back this year. I know it will recover soon. (Thank goodness for my old blogs!)  I also found another use for the Cranberry Hibiscus.

The Lots'a'lemons has produced about 6 lemons this year"  large and juicy and on such a tiny tree.  Bloody Percy the bush turkey dug up my Celon spinach - the bugger.  The larger banana tree is going well.  The Rosemary has died back - will wait and see.  I have lots of chilies.

This side of the yard has really expanded. I am proud to be growing Glen Large, Elephant and some random shop bought garlic. Time will tell if they produce. The Yackon harvest would have been great next year, but stupid Percy has slaughtered bulbs.   Percy demolished my tuber bed.  I've wired over it now.  Percy also demolished my aquaponics beds. I've built a green house to keep him out.

Tomatoes are finally growing well all over this side of the yard.  I've had no fruit yet, but should get heaps soon.  The dirt lettuce are doing well, as is the Kale and spinach.  I have lots of new Gooseberry bushes as well.

Worms are doing quite well as are the fish.  Both provide a lot of fertilizer for the yard.  I've also expanded my compost with a 250 L bin on this side of the yard for the chicken poo.

Wow.  I can't believe the changes in my garden, especially in the big girls' yard.  This year's notes:

I've learned that I have three real zones (I left the old picture of the whole site below to give you context, if you are interested).

Out the Front: The building patch is slowly getting more fertile with composting. It will take time.  It currently has the same lime as last year (the only "in place" survivor), a mulberry and a blood orange, with some ornamentals.

Cumquats are mostly used for cumquatchello these days.

Snow peas are doing well now on this side.  Great passionfuit crop for the last few months.  Paw paws booming.  Cherry toms are producing nicely still.  The sweet leaf died off but I'm hoping it will come back soon. The little lotsa lemons from out of the building site is finally taking off in a pot up this side!

Oddly, the Celon spinach is suffering greatly. I may lose it.

Aquaponics are in and doing well, as are the chickens which have started to lay an egg or two a day.

Lettuce does well in warm, not cold. I suspect the basil is the same. Perpetual spinach is an all year crop. Strawberries are starting to produce well at this time of year.

The snow peas are doing very badly on this side!  Turnips are doing badly as well - the harvest was meagre. It's also my second year of failure with cauliflowers.  (Neither side appears to work.)  However, it is possible that I am confused because the wicking bed has too much soil from Bu... that big name hardware... that isn't really fertile. I'll need to build it up to ensure that isn't the problem.

It looks like I updated this entry several times, as the yard progressed.

I appear to be coming to the end of my winter crop with the advent of Spring.  I got a great crop of snow peas:

The beans did much better than expected and tasted great!:

I ended up with 3 pumpkins which tasted really good:

The cumquats have produced more fruit than I can cope with.  I've already done one run of marmalaide. The picture shows them with the passionfruit that I mix in the marmalaide.  If anyone wants to come pick some cumquats to take home, just let me know!  Free of charge!

Oh, it was Abbey time - so a medieval style beard came and went.  Here's a little shot to tickle your fancy.

So - I guess it's time for Spring planting.... and possibly more crazy antics.

Rozie's Seat Goes Vertical and The Turn of the Seasons... read from the top now...

Elaine and Lissa gave me some bean seeds which I planted at the back of Rozie's planter seat.  I needed something for the beans to attach to on the rock wall.  I think it is a great improvement!

We have a lemon one end and an orange the other.

The seasons continue to turn here as well.  The new bed in the little dog's yard is going well.  Plenty of rainbox silver beet and snow peas coming along.  I plan to make a silverbeet, leek and fetta pie!

Lots of chillis happening now, both bell and thai. I already have four bottles of chilli jam so I don't know how much more of it I want to make.

Still getting tomatoes and the shallots are going well.  Strawberries are hiding under the passionfruit vine. The Ceylone Spinach has died right back but I have a second sweet potato vine coming along.

And that's the regular garden update for the moment.

I'll update from the top of the blog from now on so you don't need to read the whole darn thing.

We have one rule at my house - it is:  Rozie Rules.  So when My Rozie asked for two planters with a bench seat between, that is what she had to get.  I'm actually quite proud and can't wait to post a pic of this baby planted with the fruit trees. Next project will be the aquaponics setup.

Here is an aerial shot of my house and land.  It's pretty small but I have discrete 5 garden areas. This is my front garden.  We lovingly call it the "Building site."  It is a shocker.

There was a huge tree (about 4 foot wide) that the previous owner removed - called the "stump" on the pic - leaving the soil pretty infertile.  The neighbour's yard also drains all its rainwater through here.  Even better, the builders threw all their rubbish out here and then buried it.

We are adding fertilser and compost at a rate of knots.

The next garden is my Alfresco Dining Area - the Cumquat patch.

This one was pretty much in place when I moved in.  These are the fruit trees that I will cut back in a few months (when they have finished fruiting).

The next area is the Big girls' yard.

This is the biggest area with the most potential. I don't intend to touch it for a while because I have my two big girls (Huskies) out there.  The girls are getting quite old - the brown and white is Tahlia, she is 15. Dumbest dog I have ever owned.  There is a black and white called Kian, she is 16.  While I love them to death, they are garden killers and any small animals become Husky food.

I don't know about you but i just LOVE bookshops. We didn't seem to have bookshops growing up in the country as a kid. I did venture into the newsagents after school on many occasions though. They seemed to have most things you could ever want in there, including books. I also love the variety on Amazon. I've just had delivered Robert Kourik's wonderful reference book 'Designing and Maintaining your edible landscape naturally.' It was out of print for many years and is never available in the libraries. I think people nick them because it's so good. Anyway, now I have my own. Ah joy!

Anyway, when I was last in the West End bookstore, I ventured out of the plants and gardening section into ‘relationships’, just for a change of scene. I dallied around books in the humorous, fictional and factual areas, books advising on growing and keeping a circle of girl fiends, boyfriends, lovers or others.

I got to thinking about the circle of others who may send us to insanity or bring us back from the brink. Friends protect, strengthen and help to create resilience in us. And so it is with plants. Building biological and physical associations into our garden planting is known as a guild. Garden guilds create strong and resilient plants. A favourite guild of mine is the combination of snow peas and Pigeon peas with chooks nearby. The pigeon peas give snow peas nitrogen and a living stake. The chooks give extra fertilisers and stop the caterpillars. They also thrive on the pigeon pea sprouted seedlings that pop up everywhere. I used to grind or sprout the pigeon pea seeds for the chooks too. A great protein feed for good eggs and happy hens. What's your good guild idea? I'd love to hear from you. See below the pic of the Chia Guild too....Such a happy combination. 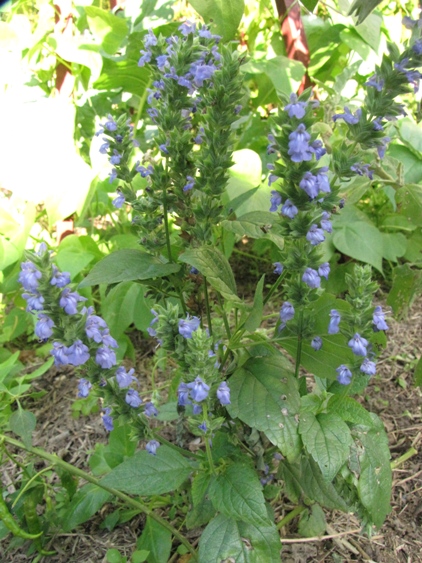 I'll be running a mini 1 1/2 hour workshop on successful guild design at my place in Wishart this Thursday 14 October if you'd like to come along. Just $49 for a good time, great learning opportunity and a catch up with like-minded folks. Call me if you're interested 3349 2962 or email linda@ecobotanica.com.au