Now that Summer is over the garden is surging into growth and abundance. But this option will soon enough be contained by the fact that as the months tick over here in the sub tropics the rain will thin out so that by July, August and September we should be in dry.
Last Winter was particularly dry and keeping water up to the vegetables was a daily and frustrating challenge.
I have installed a Leaky Hose system  but I have found it cumbersome to manage as I water the garden from the one large 100 litre water barrel and keep shifting the hose that runs from that to hook up to hoses on pairs of garden beds. It takes so long to fill and if I am distracted the water will overflow before I turn off the tap to the hose that fills the barrel.
Since my 'soil'  remains quite sandy despite my loam-ing efforts, I  think that I'm losing a lot of water to seepage despite my attempted efficiencies: trench and sheet mulching .
So of late I have been hand watering instead.
Accepted wisdom is that you need to always water long and deep  but then...that may not be the case:

According to an American Water Works Association (AWWA) Research Foundation study, manual watering with a hand-held hose tends to conserve more water than other irrigation methods. If you are going to have an in ground system, make sure it is a drip system as it uses the least amount of any automatic system – but still 16 per cent more than watering by hand. In-ground spray systems used 35 percent more water than hand watering, and an automatic spray system used 47 percent more. If you are going to have an in-ground system, drip irrigation is best . However, even drip irrigation uses 16 percent more water than hand watering. (link)

The problem is that you can't spend all day hand watering the soil.You may get to know your plants that way individually and  intimately -- but it takes time to  wet all of what you've got growing. And besides the more concentrated and speedy is your inundation on sandy loam like mine, the quicker it will seep to a depth below the root line.
And I'm a busy man.
So I'm thinking of adapting what I've got -- the Leaky Hoses -- and adding a few smaller buckets around the garden instead of relying on the one 100 litre tank. If I am doing  my sums correctly I need allocate only 10 litres per 5 metre long bed each time I irrigate.
I may have to bucket each bed daily or maybe twice per day during drought -- but the savings as per the water budget make sense.
So instead of moving along the garden beds squirting H20 at botanicals I stand at one end and fill a bucket with the liquid instead. 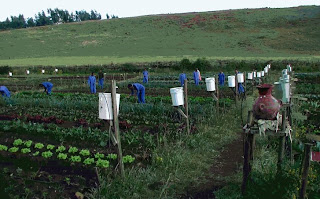 My notion is to in effect deploy both methods: hand watering and bucket irrigation. I need  get a couple of extra buckets and some hose adaptors; use the barrel I've got to water 5 garden beds at once ( at 10-15 litres at each irrigation) instead of two..and Bob's your uncle!
My problem was that I was caught up in a schematic  approach and was trying to force the garden to adapt to my technological wishes instead of addressing the challenge of watering more from the point of view of actually doing the job of just wetting soil and hoping to water the roots it contained.

The DIY method of making wetpots from flower pots is outlined here:

Methinks there is something to be said for holding a wetpot making workshop: set a date, get commitments, order a load of cheap terracotta pots and saucers (is terracotta still fired in Ipswich?) , lay in a few glue nozzles...and start making the goods in an all in activity. may suit Northey Street? I'd sign up.

Ours worked a treat but it was about 12 years ago when we had our last big wetpot patch & have no pictures to show.. They really do work well with everything we grew at the time.. Peas, beets, lettuce, tomatoes, beans & the stand outs were  luffas, cucumbers & zucchinis... They loved having water on call whenever they needed it...

I was wondering how effective/practical  wet pots are for annuals? For perennials -- any time I plant those, trees especially -- I dig a hole and bury newspaper and cardboard, brush and stuff . The mix acts as a water sponge and when I need to water the  annuals all I do is hose these sponge mulches as I know that the water will stay local.Of course in time rot sets in and roots entwine but all I need do then -- I'm thinking -- is lay down another hole mulch.

Wetpots are on  my list of possibles : rather than pay the premium, I was planning to glue a flower pot and a pot saucer together like here

But then , I'd still need to manually fill each pot unless you used some sort of hose system. They's suit perennials very well I'm sure.

I have been using leaky hose for a year -- fed from the one 100 litre tank but I rigged it up to water two 5 metres long beds at a time when I should be watering much more at once. So that's my next task -- to water more beds from the 100 litres -- I'm thinking of 6 at a time, while using my 30 litre bucket system, three at a time . 10 litres per bed in one session fed underground is close to hand watering.

I've worked out that watering deep and long aint necessarily conservative water use on sand but watering often is.

My soil is just now kicking in as good stuff after 18 months of  creative effort. While I keep throwing lawn clippings, seaweed and manures onto the beds I chuck heaps of newspaper, cardboard, branch cuttings and whatever on the paths. Under all that I laid down a plastic gutter about 20 cm wide. So if it rains I have this sponge working for me. I originally had 'perched' lakes in mind like on Fraser Island and other sand islands. I experimented with hosing the paths instead of the beds but I discontinued that as the paths aren't as mushy and pithy as I'd like yet.

Nonetheless, creepers and Solanaceae -- esp eggplant -- are keen to colonise the paths and a most productive margin is where path meets bed.

Also, despite my original layout plan the plants redesign land use and the path routes are reshaped by the invasions. I was hoping to replicate the Leaky and Wicking principles -- by having the paths serve as irrigation thoroughfares.

So for now I hand water and utilize the Leaky hose system occasionally: esp in hot weather as the depth of the hose precludes some evaporation.

As my paths narrow and raise up (because of the composting/mulching) I'm sure that they'll narrow into  channels of fibre --  true sheet mulching. Unlike other contexts it makes no sense here to consciously raise up the beds as all water here draiins away pronto.

Nonethless, my best water saving device was to build a trellis over my salad garden and grow choko and beans  over it. 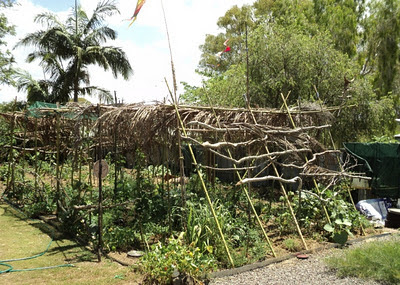 So long as the under neath plants aren't totally full son demanding the plants are housed in comfort. But I havent been through winter yet with this trellis.  My plan is to simply trim the chocko vines when the son is less. Originally I used palm fronds and  New Guinea Bean but the bean was so prolific that I lost control of my sunshine! (And it was a clody Summer).

For the pawpaws and other trees I  have dug vertical trenches near i each plant and filled the holes with newspapers and cardboard . These I simply water as a irrigation 'sink' instead of the surrounding soil.

I am no guru Evan, am good at googling though ;)»
I would say wicking beds once set up as being the easiest but not everyone can implement that  style of garden bed.. We fill ours & give the plants a small top watering (to help move the top dress fertilisers down)  once a week.

I actually learnt how to slip cast by making wetpots with Peter... I helped out at a few Permi & BOGI shows on stalls but parted ways about 8 years ago so not promoting them really... We use wicking beds mainly now..
The benefit of the roots surrounding the pots is that they self regulate their own watering needs.. We have had more success with the large wetpot's in container growing.. We have  found the ingrounds would have 3 or 4 different root systems enveloping them & not just 1 plant..

I would like to try irrigating using Ollas or by making up some for our self..
http://permaculture.org.au/2010/09/16/ollas-unglazed-clay-pots-for-...
They are more flexible in their placements I think...

The global bucket boys have a How to on them...
http://www.globalbuckets.org/p/olla-irrigation-clay-pot-system.html

The Indian woman from whom Peter took his inspiration, used traditional terracotta vessels - I think they are called 'water chattis' - and adapted the idea for micro-irrigation. If you had access to un-glazed terracotta vessels, it might be possible to fill them from a hose and let the pot do its thing in the garden/s. The woman in the TV film had a roof-top vege garden as a raised garden bed, not pots. It's quite similar in operation to upending a plastic bottle and having the water dribble from a tiny hole in the lid.

The downside apart from the cost, is (imho) having the roots wrapped around the pots. Great for that one plant, too bad for the others in the garden. As well, they are quite fragile and I can imagine breaking them when the time comes to either move the pot or mulch the plant. Their best situation is in pots or watering an in-ground tree rather than spreading them around the annual veges.