It's night time -- around 1 am -- and I've been outback dipping my hands in soil.
I pull  back the lawn clipping mulch, move aside any crusty newspaper dregs or wood bits and grab the soil underneath, copping a feel.

Most handfuls were cool and slightly moist. Some were not: dry and pithy. Indeed they were warm to the touch. By torchlight I could see plenty of  critter activity in the dirt.Very pleasing it was that I now have dirt instead of sand --  sand spit sand. Hellalujah! Some of my worms are so big I could pass them off as eels.

Why some spots should be so dry is confusing. I suspect that not all parts of my beds have received the same attention...and not all my beds have joined the orchestra.
The frustration of relying on lawn clippings as I do for my primary input  is that desiccated grass can be either matty and gluggy or act almost like a layer of dust. (self seeded weeds don't bother me).
Today it is dusty.
Given that we have not had a good drenching rain for some time and the winds have been relentless, all my grass mulch is pithy and dust like. Like dandruff. Obviously it allows breath to the underneath, but any light showering merely wets the mulch surface and there is little penetration.

So hand hosing is important: gardening on sand you need to frequently quench.

Rule of thumb for sSand gardening: water often.
Unfortunately I can't see what else I can do to improve things. My garden suffered this Summer from lack of shade. This was partly due to the fact that I had to pull down my trellis with its choko overgrowths because of storm damage to its structure.
I was premature. I shoulda rebuilt.
I am now concentrating  my shade wishes on the frangipanis I've planted...but the aren't all that tall...yet.
Frangipani's you ask? Why frangipanis? You can't eat frangipanis!
I grow em...
A garden trimmed in frangipani! Delightful. A whiff of Bali.
But since planting the frangipanis -- I have at least 20 in situ-- I've realized my scheduling mistake and have planted pawpaws in the beds, and yesterday, some Katuk/Sweet Leaf bushes.
These other trees grow faster than frangipanis and I want to harness their shade.

I'm also planting my seedlings closer together  around my terracotta irrigation pots. I can now get away with the crowding as the pots deliver regular moisture .
Love them pots. Saved my bacon.

They function better when shaded by the growth they service.
But I'm thinking that I'll plant out even more aggressively around the perimeter of my vegetable beds by deploying drought tolerant species like sunjewels-- Portulaca grandiflora -- which happen to also be edible ; and Warragal/ New Zealand Spinach  which grows on the shoreline here.
Both love these sandy soils. These sunjewels grow better than standard edible Portulaca so why not colour up my garden edges?
So I'm gonna aggressively plant out the beds. I had used sweet potato previously towards that end but harvesting the spuds disrupts the soil around the other plants I have growing, so my sweet potatoes now are exiled to their own sweet potato  grow zones.

Note to self: gotta work out how to give my sweet spuds more water.

Because my paths --such as they are -- act, with their plastic underlay, like gutters, the edges to the beds attract  growth. Wild Rocket esp loves that posey.
I'm thinking that there's an irony that had not registered fully with me: the more stuff I plant the more I get a microclimate going, more things happening, more relationships.Even if I plant 'anything' I'm engineering the ecology. I can always replace it later if I need the space.
To begin with -- 3 + years ago -- I had such a infertile environment that growing anything was almost impossible. Now that I've got myself bona fide 'soil' ....well, I'm upping the anti.

I am also thinking through the fact that if I collect logs and lay them on top of the soil I get more vigorous growth nearby  because the logs supply both shade, are cooler and retain moisture -- esp in these sandy soils. I had been burying logs and branches in  Hugelkultur mode, but I'm really getting more out of my wood inputs by simply laying big bits on top of the soil. No doubt rocks would be better, but here there are none except for the pumicestone that floats onto the beaches. I've also experimented with burying flat china soup  bowls in the soil so that they hold moisture at depth. Weird concept I know, but I'm monitoring the impact on local growth.I happen to have the bowls -- and they're cheap enough, so I thought: why not? It's a crude variation on a wicking bed

I'm not into the Permaculture preference for fruits. My sand was so sterile that growing exotic fruits was difficult. Lemon and Mulberry does well but anything else  struggles: banana, fig, pawpaw, tamarillo... In the same mode are tubers: as yet there isn't the loam depth for the plants  to  dig themselves deeper into the soil. Theres' nothing down there worth feeding on.
So it still is experimental horticulture. Fiddling with the variables.

I hope my next break through is with ground cover veges, like cucumbers. I'm not quite there but since I have been so successful with zucchini I reckon I'm on a roll. Slowly the capsicum family is settling in. Still a tad undernourished.  But the quality of each crop is improving. All over I'm now  growing non climbing snake beans...and I'm gonna try Winged Beans again some time as I love eating those.

I've also realized that my transition species may be ramblers and trailing plants because they travel across the beds looking for nutrients rather than dive deep.  Comfrey here soon dies away because it gets put off by the lack of stuff deep below.
What the garden needs is a heavy rain period which would push the activity in the soil along. A catalyst. Things are surviving but aren't really thriving because of the low moisture quotient. I'm getting a feed from this soil but the veg quality isn't good across all species I grow and harvest.
My patch only really thrives  when I see the toadstools shoot skyward...and I haven't seen such fungi for some time...except on shaded spots next to my pots, the toadstools raise their umbrella heads.

My parents had a property in Rosebud  but the terrain varies on how far you are from the Bay. As  I recall they're grey soils -- older than my sand pit, which is still VERY yellow just under the surface.

Digger's Seeds for instance is in Rosebud/McCrae. But it's on a hillside...of Arthur's Seat.Luverly garden.

I too mulch of course, very aggressively by using as much lawn clippings as I can get dropped off; bits of wood; newspaper...whatever: I bury heaps of stuff.

In Perth's sandy soils they turn to clay mixes...eg: Bentonite.

I wanted to do it without adding clay. See my mulch stories here.

But, like you, it has taken over 3 years to register gains...and I'm loving my loam. Coming on but nit quite grand stuff yet. A few more months perhaps...

We had a house at Rosebud in Victoria all sand, spent 4 years mulching , the soil composition had changed into a lovely fibre laden composition able to grow anything by the time I sold the place The new owners were gardeners I was so pleased.

I'm talking about my experience in my gardening conditions. I suspect that gravity feed irrigation would better suit soils with some clay in them.The only clay in my garden is in the walls and lids of the pots!

As I recall gravity feed systems like Leaky need to be turned on almost as often as my pots need refilling. But once the watering stopped, the soil soon dried out.

With terracotta, I can keep a constant supply of water up to my plants without flooding...and I get much better changes in soil structure and activity.

I water each by hand. That may seem more labour intensive but it means I interact keenly with the garden every 3-4 days.

I gather that an automatic system using commercial claypots would mean you up-end them, right? You use the drainage hole as an inlet.

So long as you can get a good seal at the bottom it is sure to work. I found that the  cost of the terracotta saucers, often used as bottoms, were more expensive than the pots! I suggest that you could consider using stoneware plates instead so long as you aren't set to move you pots around once they are first buried. The lip would act as a catchment for soil moisture and so long as the soil temperature ensured that there wasn't much pottery expansion the glue holding the plate to the pot should adhere.

But hand filling pot by pot works for me and saves me so much water. Another advantage with my method-- using stoneware plate lids -- is that it is easy to plant something and  embed a pot nearby. Theres' no feed engineering to worry about.

The other problem with gravity feed into the pots is that it may not work as the terracotta sweats moisture through the effect of gravity--- so if you are micro dripping into your pots then you may be sabotaging the physics that make the method work.Better to turn on the water and fill em up...then turn it off.

With your inlet small and covered by tubing you'll find monitoring volume would be more difficult too, and I'd think  each pot would be watered at different rates.

Folk try to replicate ollas but they are purpose thrown pottery items.

Of course how many pots are involved? I have around 35 x 2.5 litre pots embedded and filling the lot takes about 15-20 minutes.

A related method which I've use is to simply dig narrow holes -- 50 or so centimetres deep --and fill them with paper , cardboard, manures and clippings. So when you come to irrigate you hose these mulch pits ...at least for as long as you can locate them. The buried mulch retains moisture and attracts a lot of soil activity as it breaks down.

I have a buried gravity feed Leaky hose system in place for almost all my beds but I no longer use it because the pots are so much more efficient in my sandy soil. Every drop of water is utilized and targeted. No waste at all.

It's also worth noting that watering with terracotta pots takes a few months to 'settle in'. There has to be a shift in soil dynamics-- its lifestyle changes. 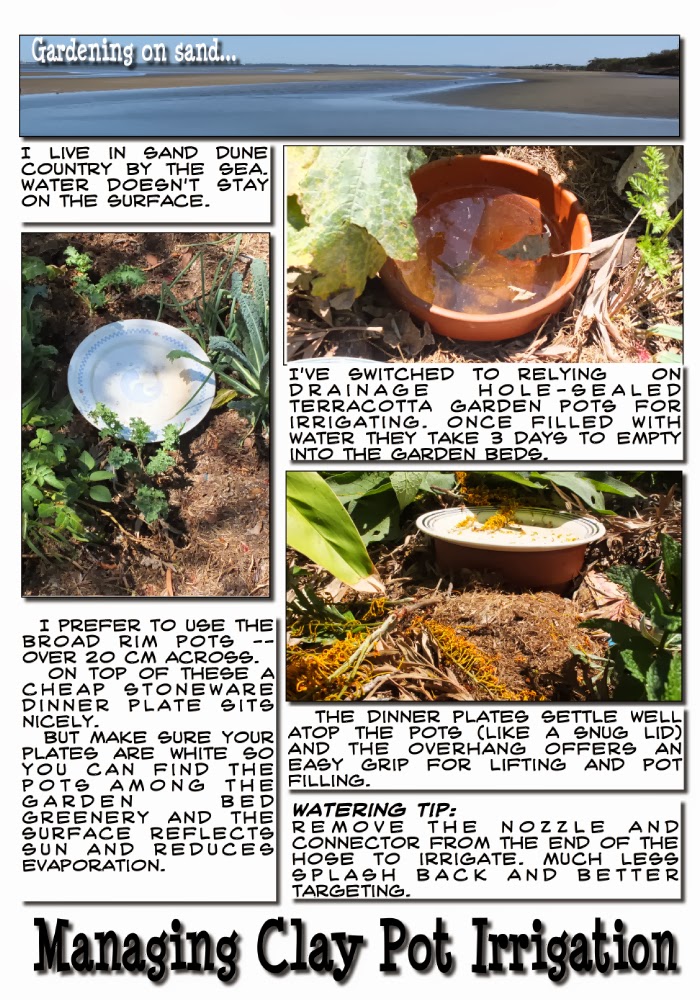 How are your pots designed?  I have looked into creating a olla pot self irrigation system where they are connected by irrigation pipe and gravity fed.  I've gotten as far as creating the pots, I still need to set everything up.  I'm hoping to use it in my herb/flower garden to start with and, if successful, to water my asparagus and blueberries.