A range of developing fruit from a couple of days ago pollination to some weeks ago:…

Hi everyone.  Well, what a beautiful day today was compared with the last couple of shockers.  So hot the previous week that I think I almost died :) and the cool change on Saturday felt like the onset of winter.  Lucky for me, the beds continued happily on their way and most things survived.   Only casualty was my broccoli and cauliflower seedlings.  I planted seeds and they just shriveled up and died or didn't even come up -> too hot I guess.  So, I gave in and bought green dragon…

Would not usually start planting my winter crops here in CQ till at least March but the weather this year has tempted me to start early with some nice overcast days & light rain. Carrots germinated in a week, usually expect at least 10 days, the beetroot are not so good suspect old seed,…

The main variation from my past practices are:
Continue

Two rants: the joys of a sickle and my troubles with Permaculture

I got myself a sickle because I couldn't afford a scythe and my grass patches are small. I had been electric whipper snippering but my machine burnt out.I've had it with mowers and powered brushcutters. 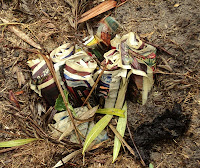 I've written before about my penchant to trench mulch by burying stuff.
Dig a narrow hole. Throw stuff in and…
Continue New temporary home in a mini wicking bed and with transparent pot I bough at Slavos I can see plenty of new roots. Almost ready to plant…

Well Glen has begun his foray into permaculture his block is slashed, he has brought in a chap to create a dam, swales will be created, fruit trees and rain forest trees will be planted, vegetable beds will be planted as well. He has bought a tractor to help with the labour and will cut and mill his own timber, first job a shed and then a ford across the creek, he can't wait roll on March.

There is a framework of understanding with how to manage your compost heap which not only simplifies this amazing living system you are creating, but ensures you get the best compost in the shortest possible time. This recent blog of mine gives you some tips.

It's night time -- around 1 am -- and I've been outback dipping my hands in soil.
I pull  back the lawn…
Continue

I don't get involved for a while, but without being too specific, Brett's journey from December…