A name change for our commonest stingless bees

In a timely newsletter, Aussie Bee tells of the new name for Trigona in Australia.

This name change does NOT affect any of the species in the Austroplebeia genus. So the…
Continue 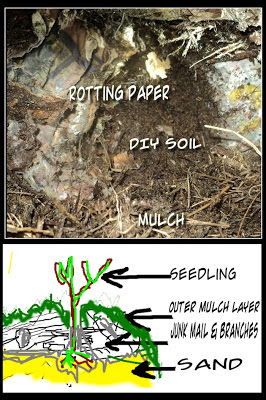 I have been exploring the big wide world of junk mail gardening.

After the recent rains I am ecstatic! This tweaked  …
Continue

Gardening in a rental property presents particular challenges. I'm fortunate to have three clearly defined garden beds in which I can do whatever I like. For the last  couple of years I've mostly grown veges, but now I'm moving into the wonderful world of fruit growing as well. I've dedicated one of my garden beds to paw paw and citrus, two fruit trees that produce within a very short time frame. The rest of the yard is basically just lawn, so there are limits on what I can do. The landlord…

Right now, a group of beverage industry giants led by Coca Cola are taking the Northern Territory Government to court for starting the territory’s first ever ‘Cash for Containers’ recycling scheme. If Coca Cola’s lawyers win the case, it could slam the brakes on state and federal leaders elsewhere in Australia starting similar schemes.

Greenpeace has a protest form here, only takes a moment to fill in.…

The theory made sense so I experimented.

I used translucent milk containers for my greenhouse cover but the system seemed inefficient. There was evaporation and condensation but   the roof of my dome was flat and I suspected that not all the…

Here are a few photos of my garden, taken today.

This is facing west. Possums are the number one garden pest in my area. The enclosure was built to keep them out, but it has the added benefit of keeping out cabbage white butterlies when I'm growing brassicas. Every year I try to grow something over the mesh in summer to provide some shade for my garden, but only once have the possums let me get away with that. It was a wonderful big new guinea bean that produced enormous amounts of…

Time to get cracking

I am back into gardening again.   My soil was old and horrible so rather than buy in some new soil, I spent HOURS digging out all my old soil (from 3, uneven beds) and  used it to level out the slope I had in my vegie patch.   I then decided to try a 'no dig' bed. The IT food gardener

For those of you who have something to do with IT systems design, this article I wrote a little while ago relates systems thinking to running a successful food garden. If you are an IT nerd, please read http://cityfoodgrowers.com.au/blog-latestposts.php?catid=51

Mulching with anything I could get...Is there a limit to mulchology?

My garden has  suffered from lack of water. Upon this problem I have meditated muchly.
Solving it is a hobby -- a creative…
Continue

The rain has long gone, even had to put the sprinklers on the veg patch last night. But the soil is nice & soft  so I've cleared some beds, added well rotted horse manure & started planting seeds. More long beans, turnip & a lettuce patch- many diffrent sorts all together as they dont heart at this time of year & I will pick as for mesclun. In pots I have started more corn, 4 types of tomatoes, Thai Pink, Tigerella, large cherry & an unknown Giant Tree Tomato, the…