just relooked at the fair dinkum seeds site. Does anyone have knowledge of the growing or is it worth pursuing or have  avail seed / cuttings for

Suggest you buy a Bay tree, the cuttings are tricky to strike and it's a slow-grower. You could put yours in the ground - expect a gum-tree-sized mature tree - or a big pot. Liquorice suckers freely and a big pot is often recommended for it. We have a native rainforest pepper - a true pepper - and it can be huge. The rainforest environment might be tricky for you there so a big pot in a sheltered spot would be best.

Some people refer to the beetle leaf as pepper vine.  Have no idea if they really are the same plant or not

No afaik, betel leaf is not 'the same' but is related. See Wiki here and here.

Found this on line 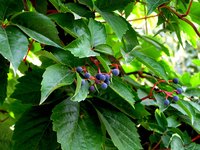 Poison pepper vine plants, Ampelopsis arborea, are problematic fruiting vines that are dangerous in the home garden both for their toxicity to humans as well as for their invasive nature. Commonly referred to as cow itch and buckvine, this woody vine is controllable. Home gardeners should snap into action if pepper vine makes an appearance as the process is lengthy but possible with consistent management.

Poison pepper vine plants, a relative of grape vines, are deciduous vines that take on a trailing, upright or climbing habit. Commonly found in open woods, home gardeners sometimes choose to garden with pepper vines in the home landscape for its ornamental value and tolerance to pests and extreme weather. Pepper vine's visually pleasing berries serve as the primary means of spread of this invasive plant. Animals eat the berries and drop seeds as they travel.


Poison pepper vine is an invasive plant in the home garden due to its vigorous growth rate that allows it to spread quickly. When this aggressive vine enters the home garden, it can quickly take over your space by killing desired plants, so gardeners should put management methods into affect as soon as vines are apparent.

Poison pepper vines produce clusters of toxic berries that begin as a green and white color that becomes red and then blue to black (See Ref 2). Gardeners can expect berries in September and through autumn (See Ref 2). As the berries are poisonous, this poses a significant danger to home growers with young children. Though the North Carolina State University Cooperative Extension Service explains that the toxicity of berries is low, people should avoid ingestion. If ingestion occurs, one should call 911 or contact a poison control center immediately.

Before attempting to control this problematic plant, home gardeners should check with a local county extension agent to verify that the plant is a pepper vine. Pepper vines are commonly confused with poison ivy, another dangerous plant for the home garden. Poison ivy differs from poison pepper vine plants in appearance with their new leaf growth that begins as a red/purple hue before changing to green. Growers should expect to find this plant in its preferred conditions including moist to wet soil and full sun to partial shade.


To control pepper vine in the home landscape, gardeners need to give the process some time as eradication may take more than a year, according to the Texas AgriLife Extension Service. Since poison pepper vine plants have long tap roots, the application of chemical herbicides must make it down to the roots for effective control. While wearing gardening gloves, growers should cut the pepper vine close to the ground and then apply an herbicide to the stem. A local county extension agent or licensed professional can suggest the best herbicide for a particular region and gardening space.

Ugh. Good to know. I wonder if it's in Australia, let's hope not. The 'proper' Pepper vines, Piper sp. should have edible berries and not be a toxic plant.