Seems a very useful way to get your head around the actual botanical events in the garden. You drop 'Spring' and shift the regular seasons about a bit by altering Winter's length and, what was, Spring.

Here in SEQ I think it is indeed a winner and synchronizes more with traditional Aboriginal calendars. 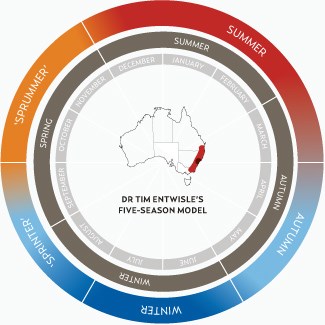 The four-season year was brought here by Europeans in the late 1700s. Except of course that here down under, the seasons were turned upside down, with our winter coinciding with Europe’s summer and so on.

In his book Sprinter and Sprummer, botanist Tim Entwisle argues the case for a five-season calendar that more closely reflects antipodean cycles in weather, and plant and animal activity.

For example, the ‘spring’ flowering period for most Australian plants actually begins in August, the last month of ‘winter’. Tim’s solution is ‘sprinter’, a new season in August–September, which also happens to be peak wattle season. Another new season, ‘sprummer’, would account for October–November, a time of changeable weather and storms in eastern and southern Australia.

Tim's blog: http://talkingplants.blogspot.com it's a bit technical at times - Botanist talking to real enthusiasts and is often interesting and well worth the weekly visit.

It would be interesting to plot monthly changes in our gardens to see how they line up.  In my view, seasons and even months for that matter are only useful if they have real meaning for both my garden and I.

Sure. It's a head space thing. An adaption.

Does this register with our actual experience or not?

If so: what does that mean?

I'm all for extending Summer and starting Spring  earlier (Sprinter).

But is 'Winter' really just June and July? Here in SEQ I'd go along with that -- but down south I'd be resistive.

but then, its the plants that are telling the seasonal story...

For the folks where the seasons are more distinctive than here, perhaps Tim's ideas are useful. From where I garden, it is confusing.

Whether my observations are relevant or not ... at least 30 years ago and it seems longer than that, my Mango tree which used to fruit in January started fruiting in December. Then when I worked in plant nurseries, the spring flowerers were flowering in August rather than September. And the summer flowerers were all in bloom in September. I figured that was climate change. A few years prior to that, I learned a lot of Geologists were predicting a new ice age. Take your pick!

Although I follow Tim's career via his blogs (and he has had some very distinguished appointments) he's as much trying to make his mark as contribute something useful to the botanical discussion. In the world of academia, it's 'publish or perish' and that's where I believe that Tim is at.

What happens in your garden is different to what happens in mine. Some of us do better with this plant or that plant or this year but not the next year. There are so many variations in results even with common plants, that making a topic of academic endeavour out of seasonal results is little more than creating a topic of conversation for its own sake.

I'm happy if it only works for us in SEQ.  Intuitively, I also like the shorter winter and the extended sprinter/summer.  I know the winter solstice is 21 June, so if the chooks are back on the lay towards the end of July, there might be something in this.

FYI : we got ourselves a Barnevelder recently, and it is still laying.

A good hen, a dutch domestic breed, which lays large brown eggs and often keeps laying into the cooler weather.  My auntie had Barnevelders, about 10 of them.

With regard to seasons, I would love to see the indigenous season calendar for S.E. Queensland.  They often used the fact that a tree or shrub was in flower at a certain time which related to prawns or oysters being available. The wattle blossom and when the rains came.  That would be more reliable than a regular date in the year.

Do we have indigenous gardeners amongst our members?

Our mate Jerry thinks we have different seasons here to other areas.

The closest Indigenous Calendar to SEQ is this one for the  Banbai Nation: LINK

Replication of traditional calendars is very limited. A good resource on their meaning as to agriculture is surely carried in Dark Emu,Black Seeds --by Bruce Pascoe. (LINK)

Also this LINK :Dark Emu and the blindness of Australian agriculture.

Love that idea of following flowering to indicate readiness of particular foods for harvest. So much in touch with the world around them. Although it is not practical for us (without the right background) and some of the indicator species will be missing now anyway - it is a beautiful gracious reading of the landscape by people at one with it. And beats any idea of named seasons with a monthly structure.

I think the utility of this calendar for the backyard gardener  is the question of a 2 month long Winter and how much we can see  an August Sprinter as an early Spring.

The brutal length of Summer is our reality.

Done right -- here anyway -- we know that we have a long growing season unlike our temperate cousins and certainly very much different from Europe.

This struck me as personally relevant because I was ill for sometime last year and into this one, so my whole gardening schedule was thrown off course. In trying to make up for lost time in the garden, I moved my planting schedule about with delays.

So far so good. It may be Winter, but here we are in Brissie with an official soil growing temperature (Br airport) of 16-18C . In Warwick it's 10-14C. The complication is that the soil and air temp should get cooler into July.

While the EKKA winds are a tad chilly in August, if you or your plants are shielded from the west it is  warm for 'Winter'.