Increasing the quails prior to fall. These little guys are a valuable source of eggs. We also need to start to process the older birds for meat.

Andrew, I think it is wonderful that you can and are able to provide your lot with some protein food to complete the cycle of food.  It is a pity that some of us become attached to whatever we grow in our own patch.  We would have no trouble eating fish if we had an aquaponic system as fish are not very social with humans.

When we had chickens, in my childhood, my father put the pen as far away from the house as he could, so we would not get too friendly with them.  On special Sundays or Christmas etc we would have poultry for a meal and no one would know which black chicken was missing.  It was a delicacy at the time.

If we were invited to someone's home for tea and quail was on the menu, we would not have trouble eating them.

At my age now, I get upset when a big tree is chopped down and even if I lose a shrub or tree in my own yard, I'm such a wuss!

With regard to cuy, it would be a matter of putting them in a farming frame of mind and doing it that way (meaning not making friends with them).

If was just me, I'd have a crack at them, social stigma or not.  I can't get My Rozie to eat quail, let along Cuy. My step-father ate them as a child in the second world war.  He reckoned they were really good eating. I'd do them as an extra livestock, not an "either or."  Chickens, quails, jade perch and cavies: it'd be a bio-diverse tiny city farm.  LOL.

Apropos of a domestic meat supply...

Domestic cavies produce high-quality meat, similar to chicken, with high protein content. Their fat is also high in healthy poly-unsaturated fatty acids...But the most important reason is that cavies do not compete with humans for their food. When you raise chickens, for instance, you need to feed them with grains that people could eat. Cavies are almost like little cows: they feed on all types of green forage and are fairly easy to keep. They are not picky in what they eat and also don’t fall sick easily. Finally, they are shy animals and less likely to escape like rabbits might do, which can damage native ecosystems ....Another highly appreciated product from raising cavies is their manure. Farmers like it because it’s higher in nitrogen than manure from other livestock, and also lighter to carry as it’s relatively dry.

Inasmuch as I make presumptions I also note:

In one project to start a home guinea pig farm a family kicks off with one male and seven females. In just months, such a collection may have doubled in size. A guinea pig herd consisting of two males and 20 females can sustain itself while providing meat for a family of six.

Not a bad beginning for meat that also serves time as a lawnmower.

The only drawback is that they don't lay eggs...

Around here the chicken focus is big with an active Poultry Club in Caboolture and ready availability of heritage  breeds.Nonetheless, livestock bring rats, flies and pong -- so it isn't a project embraced impulsively.

Even from local farms here,  animals escape -- and can cause damage that the owners are liable for.

Some of my rabbits got out and took up residence under the local fish and chip shop.

You need to be able to recycle manure and be ready to pay vet bills. In the case of rabbits, it is no longer viable to keep them at all in the face of the latest virus release and its expensive immunization (around $40-$60 annually). Rabbit meat is now imported from New Zealand at approx $30 per carcass.

I don't like pigeons in my neighborhood -- or anywhere CBD -- but keeping a dovecote is a logical food and manure enterprise.

Then maybe we should take up the enterprise of  New Zealand and look to harvesting possums for meat (there are maybe 47.6 million bushtail possums in NZ). They live off our land after all and  invaded over there. 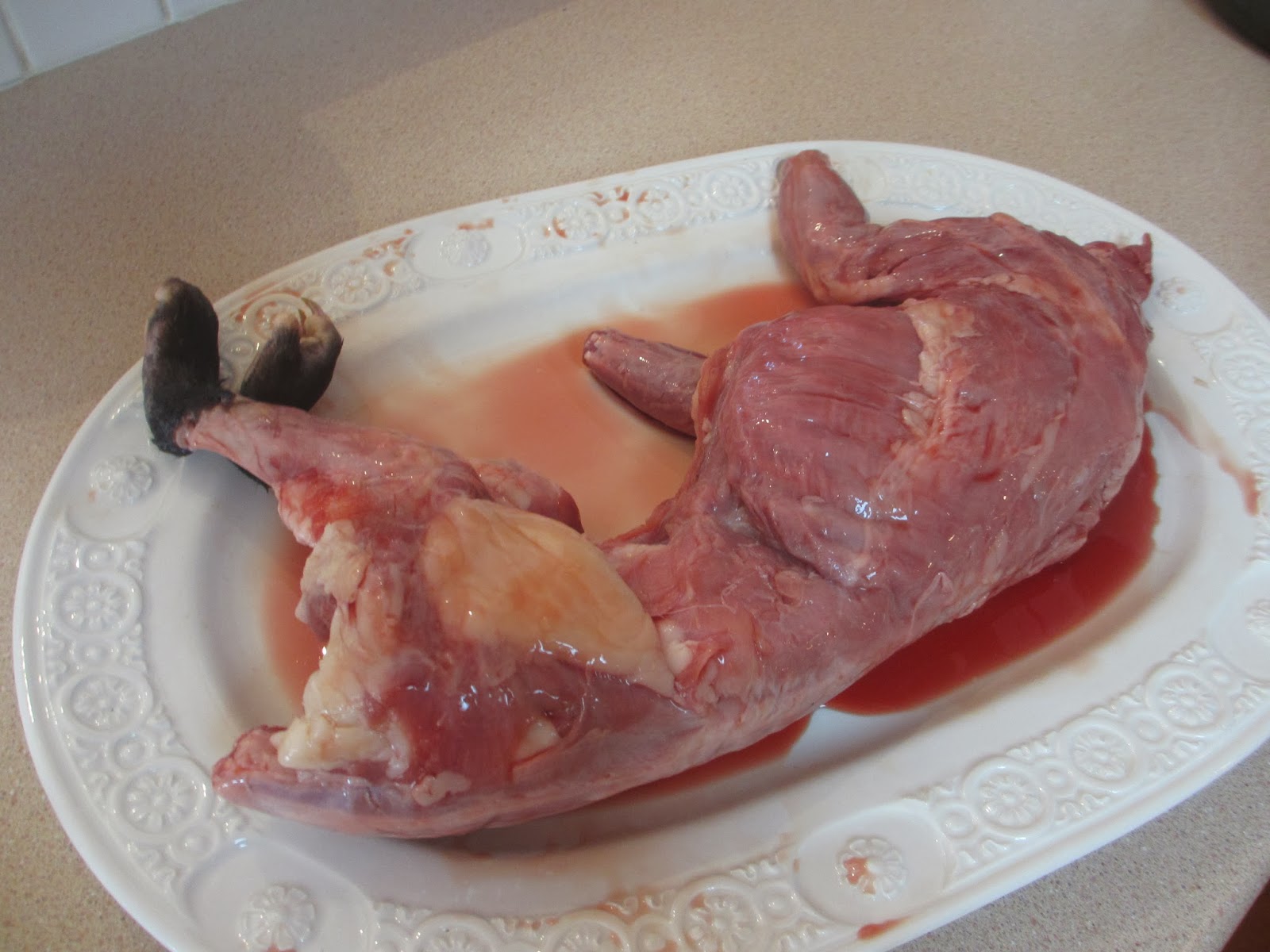 If I had room then I would get a miniature goat - but only for milk (and cheese).  Having been around goats a little, they are far too much like dogs for me to ever be able to kill.  I can't think of a large critter that I could knock over.  I reckon I could do the guinea pigs but you'd have to make sure your friends didn't find out.  It has a social stigma.  A friend of mine is doing pigeons. The advantage is they look after themselves and will sit on eggs (unlike my over-domesticated quails).

It is hard to watch something be killed.  It's harder even to do it yourself.  However, for me it is a part of trying to live more ethically.

Good points. Chook while cheap and easily available is possibly nutritionally not very good. Or it's not in the flavour stakes anyway. No dark meat, no real flavour. Hence the myriad of dishes where everything but the kitchen sink is added to chicken to give it some flavour.

And the conditions under which the majority of chooks kept for food are housed is horrifying with the overly large breasts weighing them down, sick ones on the floor being trampled by their mates. I can see why the food industry likes chook breasts but the meat is so dry and flavourless I wonder why they put the animals through such a time for something hardly worth having.

Even the organic ones are no more flavoursome. They use the fast-maturing white chicks in order to compete but really for the extra cost - usually double or more - they are not worth eating anyway.

Doubt we could keep pigs. A neighbour with rented acreage keeps sheep and goats to what purpose I don't know except for lawnmowing. Pigs are in many ways the ideal animal for a small farm, being carefree what they eat and fairly fast growing.

Currently watching the repeats of River Cottage Australia and still finding the slaughtering however humane, difficult to watch.

When you kill and eat your own the respect for your food rises sharply as you are more attuned to the energy and  life force it constitutes.

Unlike vegetarianism's  abstinence, killing an animal for food after offering it a good life, draws you into magnificent web of existence and mortality.

No good for Queensland -- as it's illegal -- but rabbits can service a system of resource management. I even farmed them from vegetable shop scraps and leftovers plus some grain -- and I didn't have a garden.

However, I think chooks are better as there's the egg aspect, easy housing and cheapness of feeding. But as meat, the problem is that dead chicken is so cheap and readily available.

I reckon what neighborhoods need are pigs --collectively owned and fed.In conjunction with a local butcher who has a smoker...

However, my chooks will eat ANYTHING in around 40 minutes or less and hypothetically I could raise them to slaughter. Indeed when they stop laying, you do have that choice -- but why kill and cook an animal whose food substitute is so easily bought in a shop and after so much service?

One of the great urban traditions of Brisbane is the longstanding habit of keeping chooks. Not so in Melbourne when I was growing up.

Guinea Pigs make menu sense-- especially if you don't like mowing lawn.I'm sure aquaculture works well but it does require infrastructure.

Indeed, one of our great tasks collectively is to re-integrate animals into the production landscape in tandem with grains and vegetables -- and not as separate industries.Consider the logic as recycling.

One thing I've learnt to respect sand for is that it makes a great surface to keep chooks on.

Good aspirations. Could you kill a bigger animal do you think?

The chickens are MUCH easier to manage.  I couldn't kill one of them either - unlike the fish and quails, the chooks are pets.  You'll never find one of my fish or quails with a name.  Even then, it's a tough gig to kill something. I'd love to get to the stage where the only meat I ate was that which I raised.  They have good lives and fast, painless deaths.