One of my chooks died a couple of days ago. It happens.

So I had to bury her deep so that the dogs didn't dig her up.

See! the chickens round the gate
For their morning portion wait;
Fill the basket from the store,
Let us open wide the door;
Throw out crumbs and scatter seed,
Let the hungry chickens feed.
Call them; now how fast they run,
Gladly, quickly, but not every one!
Stiff and silent there it rests,
Mortally wounded by unknown pests.

I've started using bags made from maze for Vetiver orders -- so yes, they also make a good poultry coffin.

But the hole! Oh the hole! 50cm deep and every shovel full was wriggling in anxious earthworms. I know I have worms muchly, but I did not think I had so many in every square whatever of soil.

I've always seen myself primarily as a worm farmer. The relentless mulching must be conducive to worm ambience. I don't dig -- so that's another bullet point. Then there's also the Scurvy Weed that colonises every patch of open earth, like a green toupee on the earth.

So my patch of earth is left undisturbed aside from the rare funeral like the recent one.

One way I ensure that RESPECT is to employ my latest design stabbing stick. Best tool I ever had. It's a pole with a short star post attached. I use a galvanised survey post. While I use it to lift myself up from kneeling or crouching position when down among the plants, my stabbing stick is an awesome planting tool.

I just stab the earth to depth and wiggle the blade around to create my planting hole for seedling or seed.

I developed this from planting so many Vetiver slips. We began using crowbars, but now use an augur. My stabbing stick is a domestic application of the same principle. 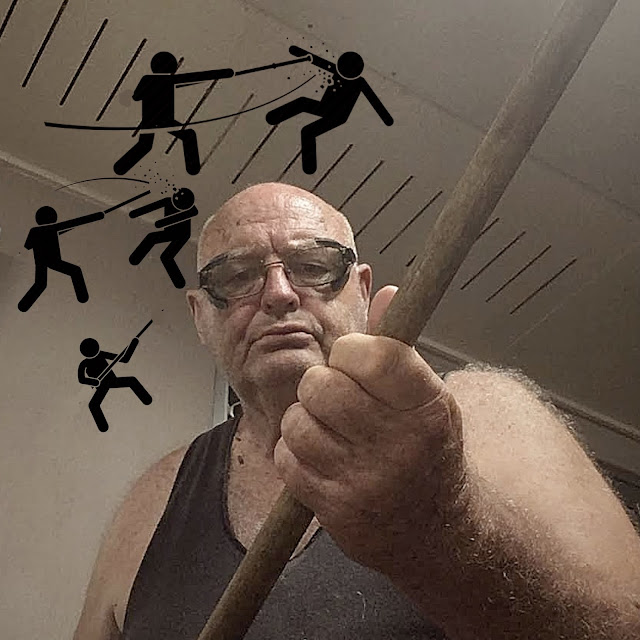 FYI: I'm a bit obsessed with sticks as I'm into martial artz with staffs. I'm usually using a  walking stick to get around anyway, so I simply followed my elbow with that in mind and took up the Bo and Jo staff. I even have a Tamil Silambam stick.

Se watch out, I'm armed with a weapon!

My other dependency is my 40 cell Plant Tray. In general usage you only need one of these as 40 seedlings should be enough for most back yard vegey patches. ASIDE: I don't use a finger. I insert seeds with a surgical quality pair of forceps I got from the chemist. Get flat end ones/not toothed.

Again, this is a product of our Vetiver activities as we use a lot of these to bring on divisions.

At the moment, I'm resting these plant trays in bread crates covered with plastic sheeting and layered with Perlite. Like a wiking bed, the cell trays sit on top of the Perlite and don't need much attention to keep the water up.

I had purchased the Perlite to make my own seed raising mix but soon enough abandoned that enterprise.

But in my years of frustration trying to grow seedlings from seeds, I do appreciate my current rig as my most reliable setup.

Then there's the problem that drives me crazy! When you plant the seedling in the garden bed how can you protect it and signal where it is so that you don't accidentally remove it. If you mulch willy-nilly like I do, later stupidity is a huge problem.

But I think I have a solution.

In the past I've marked transplanted seedlings with (you guessed it) sticks. Any old stick. Some I tied cloth to so I could

delineate the plant species. Sure enough, this method isn't a good signifier.

So now, I'm using cheap bamboo stakes with one end sprayed with a showy paint. These I insert next to each seedling I plant out.

I think I may be finally on a winner.

And my final tip and trick is how to not lose tools. I lose tools every year. They merge with the mulch and are no more.

I used to spray them with a paint but still that didn't treat for my mind's inability to discover lost goods. So I purchased a roll of marine grade reflective tape.

This stuff doesn't stick so well on some surfaces, but if you cable tie it onto your tools it will stay put. I think the red is best in the context of garden camouflage.

You may need a GPS and Metal Detector for Christmas.  I thought that stick was for covid distancing.  Thanks for the seedling pot 40 cell reminder, I just ordered 2 of them.  The same supplier also had deep tall black plastic bags for advanced seedlings.