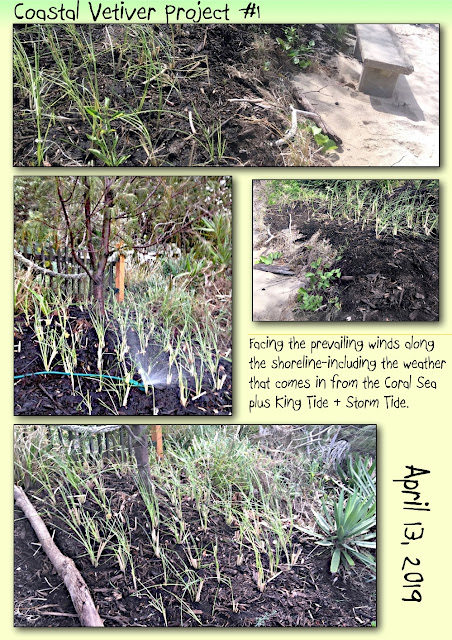 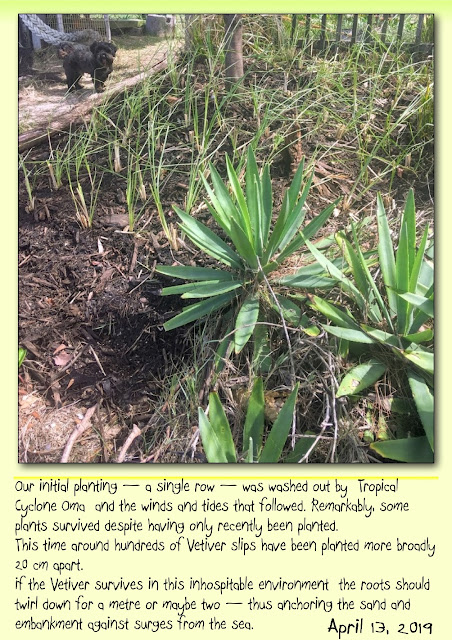 We grew on the Vetiver beforehand -- inside cells --in a mix of the sand from the site  and composted cow manure (1:1). That combo seems to work fine.
Now we wait.
Keeping the water up for the first few weeks.
And no cyclones on the horizon....
The open spaces will be filled with another planting of Vetiver -- and another clump division-- after Easter.
All up, just over 220 plants.
Remember, Vetiver grows and grows up to almost 2 metres --  but is easily cut back like any grass.

One of the problems with many sand dune stabilisation projects is that the ground covers are shallow rooted.
What really holds our coastline in place are mangrove forests. That and any underlying seams of rock.

In some places, residents have planted Norfolk Island Pines -- and most have gardens of  mixed exotics. Note the yuccas...

Lower level bushes are really challenged by the foot traffic and the hostile conditions -- although Coastal Rosemary  persists, along with patches of Warrigal Greens. Local Pigface (Carpobrotus glaucescens) has been consciously planted in some sections --although it also grows naturally in others.

True Wallum habitat seems lost from this seashore -- but then, the complication is that the shoreline was always shifting as sand was washed away and more deposited.

Along the front beach on Bribie -- Woorim -- the coastline is a wriggly worm of sand that is constantly being reshaped and moved. TC Oma almost split the island in two at its northern end.

Research suggests that Vetiver can be a transition species facilitating re-colonization by native flora.

If we can engineer Vetiver to hold the shoreline -- albeit by example initially -- I also think it may have a local role shepherding water run off during heavy downpours as the existing drains and channels don't have enough 'fall' to carry the water out to sea.

If there is any storm surge effect or King Tide, even the town's drains back up as gravity rules drainage. The farm land around us may flood, cutting the roads in/out, and the sea may batter the coastline --  but we are benignly perched on free draining sand --sabotaged by  bitumen roads and tin roofs that flush run off to the sea.

'Tis an amazing orchestra of events.

But there's always the threat -- something that we're aware of -- but most other suburbs are not, as the horrendous flash flooding of Caboolture in May 2015 suggests.

Will be good to see how it works out.