The Garden in June: many surprizes 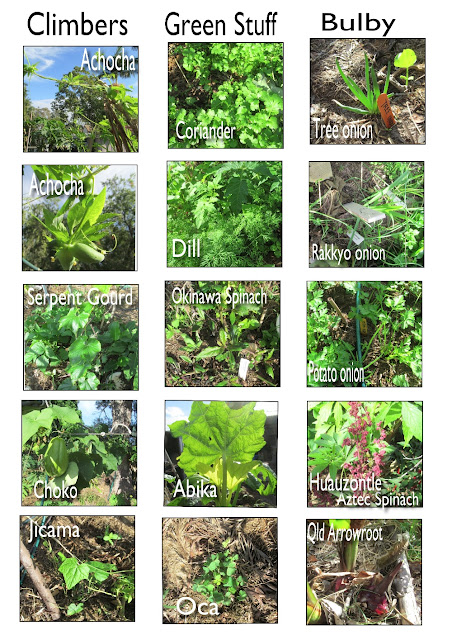 My garden appeared dull and stressed. Not much rain. Above average 'Autumn' temps. What's a plant to do?

But on closer inspection there are many surprizes. It may not look keenly verdant but hither and yon some delights are consolidating.

Unfortunately a bush turkey visits my garden every day and the avian beast and I are at war...

As an enthusiast for the TV series Pie in the Sky I learned a valuable lesson. Garlic burns rapidly. Fry the Onions (I suppose the standard ones) first then add the Garlic.

Sometimes caramelised Onions enhance the flavour of the dish, sometimes not.

I use the whole thing...when it comes to spring onions and leeks.No waste.Except the wee roots at the bottom end. You can buy fresh garlic stems nowadays too.

The trick is to sweat fry them and maybe chop them finely. The tops of the leek stems take longer cooking , esp if the plant is old, but they break down nonetheless.And you may not use the outer layer of the leek if it is too stiff or dry.

Also you may need to cook the bulb end of spring onions longer than the leaves/stems sometimes as the bulb end has more layers.I also find that it can be preferable to add these alliums after initial frying -- say with other meats or vegetables -- rather than alone and first as is the presumed culinary habit.

This is what the Turks do.These plants are 'wetter' than standard onions so you need to  cook them more slowly rather than fry them brutally. The end result is a softer, sweeter taste with a few succulent pleasantries.

The Italians , for instance, don't cook onions and garlic together and traditionally prefer to cook standard onions for a long time alone in the pan.Indians do the same with 'onions'.  I reckon if you aren't prepared to do that, why bother at all with 'onions'? I suspect the generic 'onion' listed in so many Asian recipes, and so quickly fried,  are just as likely to be originally any number of its cousins. And in Malaysian cuisine the rempah spice mix is an art in combining and cooking -- but it relies on shallots and other alliums rather than 'onions' per se.I guess it's all about thinking -- eating and cooking -- outside the box as we have been so poorly served by the supermarket 'onions'.

Just look at all that crap garlic we've had to put up with for years!

Similarly why must onion be always combined with garlic? The classic Thai rice dish -- Basil fried rice -- relies on just garlic and basil --  and the extraordinarily inventive West Lake Soup relies on Spring Onions to take off.

Going back to the Turkish way...you'd probably dry fry the meat slowly first until the fats melt, then you add the alliums and a little oil for flavouring. It's a different mindset. A different attack.

The other Middle Eastern trick --say with minced meat dishes like koftas or kebabs -- is to grate the onions. Now that's a very good reason to use onions rather than other alliums: onions are grate-able!

Exercise your well-known caution Andy ;-) Who needs a recipe for Garlic leaves? Use when you would use Garlic!

Dave - Jeez - more varieties than we'll ever see.  Did you notice that while everyone says, you can eat the leaves, there's very few sites that actually provide leaf recipes.

I've been relying on this Elaine: (from http://www.growthis.com/how-to-grow-garlic-from-cloves/ )

"You can trim a few shoots off for cooking while they’re growing, but don’t cut too many or it will stunt the growth of the garlic bulb."

The greens are really nice however … if you want bulbs, don't snip the greens.

While on the topic of Allium, I've shared this site before but it warrants drooling over:

and then this page which explore the veges overall -- but make sure you scroll down to read the discussion on sweet potatoes...

Which leads into this creative exploration worth checking out (some great ways with 'em):

I suspect that once my shallot crop comes on, I'll probably do the same.  I've already started eating the greens off the Glen Large garlics.

I'll use chives in an egg scramble or omelet but I find them a tad distracting in other dishes. Maybe if real desperate I'd use them in a soup like West Lake Soup or as a decoration atop pumpkin soup.. But when I have spring onion stems I'm happy as a pig in a onion patch...Why wander?

My reticence is partly explained to the fact that chives are traditional   to French and Swedish cuisine and I don't cook much of that. I may have prepared the Swedish classic last night (& I did --because it's a fav here!)--Janssons frestelse (Jansson's temptation) -- but I used leeks.

I find chives tend to repeat within me...maybe it's genetic? I even suspect I get a little nauseous.

But since I seem perverse maybe I should review my practices...and push the envelope.But I Googled ''cooking with chives" and nothing excited me.

I had a clump of chives growing in the one spot for 4 years. Then I divided it up and planted bits along a few border edges. But I guess I've only harvested from stems once this year.

I know they are the same fam as the spring onions/scallions but I'm not convinced that they aren't black sheep.

However, looking at the literature I don't know what I've got growing. A true chive is Allium schoenoprasum and the Asian variety is Allium tuberosum....but I suspect I have Asian garlic chives planted...so maybe I should hunt down the schoenoprasum and try to make amends.

As I've written elsewhere, I haven't bought or used a normal onion in maybe  two years. That's a true white or brown onion. Before that I'd relied on the Spanish style red onions anyway. For cooking I use   spring onions and leeks and garlic. But many times I use the spring onion stems like the Chinese use chives.