The Garden in April: the Month of the Triffids 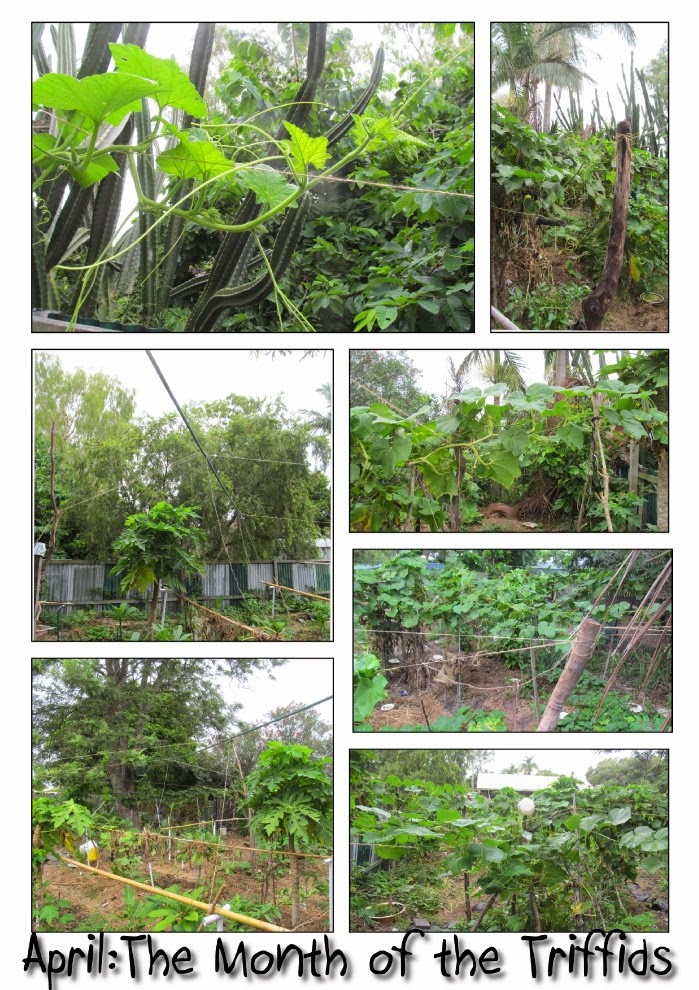 After a desultory Summer, the garden has re-invented itself as a garden of Triffids.
Plants that move! Clamber relentlessly. That twirl and twine and choke and crawl...That drag themselves tendril by tendril.
Plants that cannot be stopped!
Vines.
Outback, taking over, are African Yams, Chokos, Russian Cucumbers and New Guinea Beans. In the mix are Snake Beans, Yam Beans, and Bolivian Cucumbers (Achocha) Sweet Potato, Butternut and Kobacha Pumpkins...
With so many climbers and creepers I had to install lifts. So as the garden grew up and crawled I started feeding it jute twine and began running feeder lines hither and yon like a aerial circus or a spider on acid.
Who would have thought that the air could be so occupied and verdant when the soil is so far away?
I wish I had a plan for this macrame but its all impulsive twisting and tie-ing as I try to keep ahead of the tendrils. Nonetheless, it's a novel garden now. I ran an old hose from the huge Silky Oak to an overhanging Dawson River Bottle Brush so that the future aerial activity has more freeway.
It's detente. I'm trying my hand at plant husbandry. A plant trainer.
Without my trusty roll of twine....they'd take over.
The irony is that despite employing such a simple tool, the climbing plants are thriving. They must like the exercise and the journeying, even though I set the route.And nothing has traction like twine. It's ladder for plants.
Unlike the Permies' penchant to 'design' a garden from the getgo, this one comes together on the fly.

For more discussion on this climbing adventure, check out this link for a comments thread about my experience using twine for climbing plants.

But I do have other plants growing closer to the ground, and, with the cooling of the weather, have been madly planting out and sowing seed. Seeds I had planted before that did not take over Summer, are now sprouting on my second try.
I've improved my sowing routine and embraced a different relationship with...weeds.

Over Summer the weeds got away from me. It was a great season for weeds and given that I was so often ill, the weeds freely grew without challenge. So where they grew I let them be...
Then I smothered them! And those I did not smother in their beds I harvested for mulch.
And a fine thing too. I kept laying down and moving about weed mat on the paths between the garden beds and any weediness underneath died. Why pull a weed when you can darken  it to death? If I don't keep the mulch up I get weeds because my mulch is chockers with grass seeds (because it is cut grass).

But surprisingly on the beds I get few weeds...

Despite that I seldom weed...so long as the mulch keeps a'coming.
To then be able to turn weeds into much -- by throwing them atop cardboard, packaging and newsprint on the garden paths -- is a delightful irony.But it works just fine. And given that harnessing a creeper is a simple snip snip with a pair of scissors -- both jute twine and plant  is keenly laid to rest on the very same paths. I recycle the dead.
So I smother the weeds with weed mat and then blanket them with paper and mulches.
Plants.
I've ratcheted up my exotic penchant with my recent seedings. Among the  more interesting plants I've sown are:

These plants may be growing but not all are thriving...not yet anyway.

I  guess my major oversight was to not plant out enough flowers...for blooming at the moment. I've rectified that with another sunflower indulgence and a keen insertion of some classic cottage garden  standards  like Hollyhocks, Lupines and such.

But vegetable or flower, I'm still learning how to handle each plant so that it grows to maturity. It's been a great Summer for peppers after the bad times of the past. But cucumbers -- the ready fruiting thereof -- still alludes me, so maybe I'll be cross pollinating with a feather next time around.

And talking of peppers...and many of my plants in fact: I've been trying to rectify their habit to fall over. My soil is so sandy and the mulch I use so friable, that plants struggle for anchorage , especially when they get larger or bear fruits. So I've run a 'hand rail' the length of each bed on which I can rest sticks and such to support the plants underneath. Even inserting sticks does not suffice as they too fall over so the sticks often need to be supported. Thus my hand rail...chest high: bamboo canes running parallel to the soil.

That Orach has a really weird smell. I recall it as being a member of the mint family; think mother-of-herbs rather than kitchen mint for leaf thickness. Try some first before committing to it in the garden. I have seen Orach in the local fruit and vege shop seedling section. So it's being grown and sold commercially.

I got the Egyptian Spinach from Green Harvest and it's very easy to grow and very tasty without, I gather, oxalic acid issues. If looking for recipes look for  molokheya  or molokhia. It's sold here frozen in ME groceries.I didn't realise it but there is a whole genre dedicated to it across several cuisines so it looks like I need to plant out some more: see LINK for cuisinery

The Aztec Spinach I got from 4 Seasons Seeds (Link). Hard to find in their catalogue so use the link. 4Seasons also sell Egyptian Spinach so that may save you some postage. However, it hasn't been so easy to grow. Maybe it was too humid when I first tried...but now I have a few plants coming on and have planted more seeds.

Next time I'll try some Orach  (note cool season) from them, of which the NYT writes:

LET Popeye have his spinach. Orach, used like spinach until the real thing came along centuries ago, would probably delight Olive Oyl.

Visually, orach is a dazzler. In the taste department, it holds its own.

The velvety leaves are burgundy on one side and deep green on the other, with bright magenta stems, making it pretty enough to be a houseplant. When cooked, it bleeds pink, tinting surrounding ingredients, like rice, the color of bubble gum.

This leafy plant, also called mountain spinach and bearing some similarity to spinach, though it is botanically unrelated, is being discovered by farmers and chefs who dote on arcane heirloom vegetables....The orach now cultivated is not bitter; the mature leaves, two to three inches long, are quite meaty. When cooked, they have a mineral flavor with a hint of fennel. This orach is not as astringent as spinach, but like spinach, it releases considerable liquid when heated.

I also got some Saltwort (Okahijiki) from them, which I'm experimenting with (not that any have come up yet). I'm also trying to grow another salty -- Samphire-- which is really tasty. But those seeds are rarer:

Okahijiki, or Land Seaweed is a highly nutritious annual Japanese vegetable rich in vitamins and minerals. It has soft deep green succulent tubular leaves and stems with a crisp texture and salty flavour. This traditional vegetable has many uses and usually accompanies Sushi, but more often it is used in dressed and vinegared salads. Okahijiki is either steamed or blanched briefly in salted water and then quickly cooled in iced water and served with a dressing.

Okahijiki literally ‘Hill Seaweed’ is found in the wild growing in salt laden coastal marshes throughout Japan and obtains its name from its similarity to the true seaweed ‘Hijiki’ found growing on rocky coastlines around Japan, Korea and China. Okahijiki is easily grown either in the garden or in pots, and grows vigorously in warm wether. Harvest young growth regularly as it becomes somewhat inedible once flowering commences.

Egyptian and Aztec Spinach? They were grown from seeds....So I need to go to the seed chamber and find the packets.

As for vines-in-the-air....I think I've lost control and have no Plan B in place for when they take over. One hopes they are prone to hybridization into becoming carnivores.

My goodness Dave, what would your garden look like if you went on holidays for a week. When you got back it would be like a tropical jungle with all your vines in the air. I am looking forward to seeing it in a couple of weeks.

Could I please ask you where you bought your Egyptian and Aztec Spinach from as I am eager to get some, you have inspired me, I am wanting to plant a few of your suggestions. Thanks again for the inspired update on your garden.