The weedy TRAD has grown like Topsy and covers a lot of ground. It will take all of the cooler months to clear and Roger does not look forward to such challenges with any great enthusiasm these days.

Two of the crops that do well in the warmer times come from the same family, i.e. Turmeric and Ginger. This year, I adopted my usual practice of moving the growing sites around so that each place hosts a succession planting, featuring plants from the same family only every three to four years, I grew my anti inflammatory spices in sacks. As the following picture shows they have done well.

Intermingled with some climbing squash I had about seven sacks planted with Ginger. The harvest was good, I will need to freeze most of this, although I do also dry and grind to use the dried ginger powder. I do the same with the Turmeric. I also grate Turmeric and Ginger every morning and infuse my coffee with this as an anti inflammatory measure. I don't know how effective this is, and my readings tell me that Turmeric needs the addition of black pepper to assist the assimilation of the active ingredient (Cucurmin) into the body. I have never added pepper to my coffee, as it just seems strange to do that, but I have recently read two books extolling the virtues of the two spices with loads of accompanying recipes to try. Also shown here is my plantings of Glen Large? Garlic. I saved the very best of the cloves I grew from last years crop. The two varieties I grew were Glen Large and Italian Red. I don't really know which types were the best, but I just went by size for this years crop. I think Andy was asking for anyone with some Glen Large to plant. Sorry, but I had just planted these out at that time, but if all goes to plan, I may have enough to let you have some next year. The ones I planted had a reddish hue to the skins, while the other type had a very pale almost white hue. These were considerably smaller and have been used in cooking rather than planting. The next photo shows my Italian Fryer Capsicums. These seem to be quite a hardy grower, and are certainly my best Capsicums grown at Park Ridge. They grow through summer and as long as I cover them up with vege net to keep out the fruit fly they are a welcome addition to my meagre summer food supply from the garden. The last photo is of my Babaco tree (Champagne tree) which I bought from Daley's on the first trip a couple of years ago. As you can see I have planted it out in a wheelie bin, and it is doing OK. I have let one fruit develop this year and it is getting a reasonable size. I followed the recommended practice of removing all the fruit which formed for the first year so as to not stress the tree too much while still developing as a small tree. As we are gearing up to sell our  house and land in the next couple of years, anything I buy now is being put into a pot (or wheelie bin) so that it can come with us. Well that's all for now. I hope everyone is well and full of the joys of, well, Autumn. So get out in the garden and lets hear what's happening in your neck of the woods soon. Looking forward to Sophie's event where no doubt she will unlock the mystery of why my sourdough is such a challenge to eat!!

Wow that is a great haul of everything considering how long you were away. we are still producing both capsicums and chillies - seed given to us last year so dont know the names ! the garlic is doing well and our ginger gaangal and tumeric needs to be harvested ! tomatoes raspberries yams and pineapples are on the daily menu at the moment ! bit busy doing clean up and packing for much gardening at the moment - missing out on the best weather !!!!!!

The Italian Fryer is also called the Cubanelle .LINK

I haven't been able to master their growth but I do buy them in bulk from a stall at the Caboolture Mkts --and freezer them. 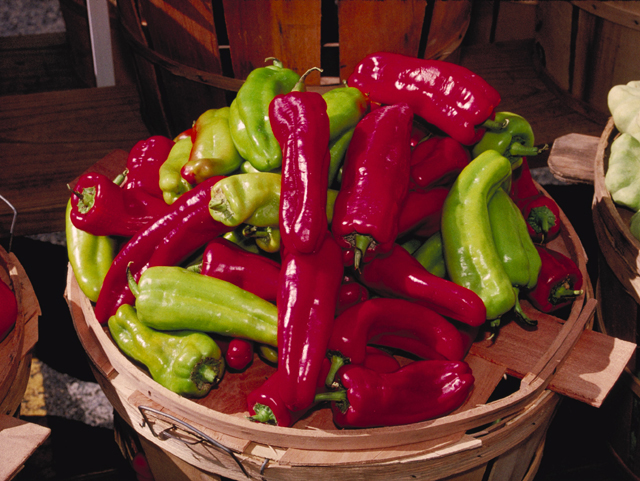 For taste, texture and 'meat' they are the king of capsicums. Your standard bell pepper is boring in comparison I reckon.

They are -- along with celery and most of the Alliums -- the bestest vegetable in the whole wide world.

What's the drill on the pepper family?

My 'Perennial Capsicum' plants are still fruiting and I'm drowning in luscious chilies.

And it's May.In a garden with part shade upon it.

Can't match those Italian fryers of yours, Roger -- and I LOVE those.

So I got to thinking...with Dr Google. Why is this so?

In Queensland, capsicum and chilli are grown all year round. The industry has some relatively small growers that crop fewer than 10 ha, though most production is done by a few large growers.

So I reckon if I can get a pepper seed to sprout I'm in production --sort of -- despite the weather.

Yes Susan the capsicum is a sweet type. It is thinner skinned than bell capsicums, Maybe this is why it called a fryer? I will bring along some seed to Sophie's event if anyone would like some.

Massive crop of ginger! The Italian fryer- is it a seeet capsicum?

This evening I made up another batch of golden granola -- muesli -- with turmeric. I eat it with yogurt (Filmjölk) every morning. To close off the day i drink hot cocoa with turmeric.

Mine is  a blend of cinnamon, pepper and high dose curcumin turmeric -- but always with a fat.

Turmeric goes well with tomatoes I find. It's just that the Latin Americans and Italians aren't turmeric junkies. But in Turkey and Iran Turmeric it a culinary essential. Any excuse.

As for the Trad: i know I'm supposed to bewail its persistent presence but it is a very effective ground cover. Compared to grasses it is easily removed, desiccated or brewed into a fertilizer tea.

Is that ginger in the barrow, Roger?  Your fruit bins are look great.  Those red caps look a bit like Jimmy Nardello capsicum,  a good all rounder, we used to grow them some time ago.

Love the bag idea for ginger,  I have lost the ginger name tags since I grew them last.

Looking good Roger! Not heard of those Italian Fryers - would love some seeds when next they are available :-)

Great report!  I'm jealous of the capsicums too.  Don't worry about the garlic - it looks like my elephant garlic started to shoot after all and I got some cloves from the very kind Dave Riley.

Your garden is looking fabulous. I am in envy of your Italian Fryer Capsicums, we love those here, now that our garden is again looking like someone loves it I will start planting again soon. Your Babaco is looking great, ours snapped off half way down as it had so much fruit on it, we hadn't staked it. Look forward to seeing everyone at Sophie's.