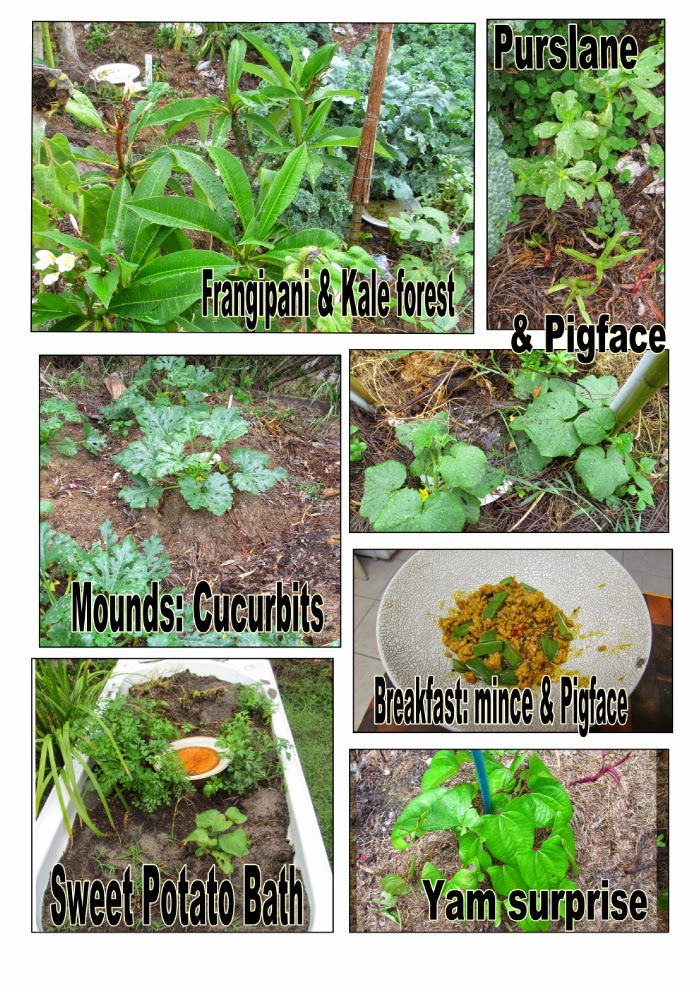 Finally we are getting decent rain....albeit with a price tag.
My garden was devastated by the October/November heat  and lack of moisture and little mulch to be had. So I started replanting and rejigging. Changing the plan.Engineering for the heat and the dry.
Unfortunately, last week's storm cells hit us hard and my seedlings were shredded by golf ball sized hail.
So the rain does come at a price...
What survived  and what I've planted since is beginning to add promise to  the rejig.I'm looking at the garden from 2 metres down to the soil and across the beds as a sort of complete entity, rather than just looking at the soil.
Planted out are jicama, winged and snake beans; more chokoes and strategically located Arrowroot, Indian shot (Indica) Cannas and sunflowers for  Summer shade (and a mulch resource). And everywhere I've planted pigface cuttings -- mainly  Carpobrotus glaucescens (Eastern Pigface) -- but also the southern variety, Carpobrotus rossii, as well as Purslane, Portulaca oleracea. They're my ground cover living mulch. Leastways that's the plan: a carpet  of succulents.
So shade above via climbers,  and succulents below, with mulch and shade  serving stuff in between. In sync, my frangipanis have come back to life -- so I'm hoping they grow fast over the period of hot weather to come.
In the mix I've tripled my Katuk plantings with hedges of the bushes running every which way in the shadier spots. You can never have too much Katuk.
My cucumbers are coming on -- now occupying my mounds which grew such a great crop of spuds this year. I'm hoping the  contour won't require me to trellis them.In the mnix: anew plat out of zuchinis.
In a succession of 'containers' the KangKong is growing well -- just so long as I hand remove an infestation of 24 spot ladybirds almost daily. And my Jerusalem artichokes are doing fine: spreading out and now more than a metre tall.
Also 'contained': I planted out sweet potato in an old bathtub after it was clear that I couldn't keep the water up to the plants in  garden beds.
I suspect there are more spuds to harvest but I didn't mark all the spots where  I originally planted seed potatoes so I'm still discovering nuggets  in the earth.I'm also growing a 'yam', that has taken off in several spots -- but I've forgotten its species. That's a surprise for later.
Of the standard veg fare what's growing is limited to chilli peppers --both hot and sweet -- rocket, basils, the parsleys are surviving, and chicories. Still delightfully confident in their growth are my forests of curly leaf kale.
Like the Purslane, I'm finding that the edible hibiscus -- Aibika -- is easily struck from cuttings and , as far as my stomach is concerned, is a tasty little number.So there's another plant that I'm planning to spread around a lot by parking it in the beds.
The garden still looks dreary -- as though it has suffered -- the pain shows. But give it time...

I think root vegetables are a real trap, Dave. I let the evil ladybirds go nuts on my potatoes and the grasshoppers go nuts on my sweet potato, and then I pay for it in the rest of the garden when numbers get out of control. I think it's best to squash the nasties whenever you see them.

You're right about KangKong, Elaine -- it does prefer the shade despite what the online universe suggests. Mine is in afternoon shade and it thrives -- growing in a sort of muddy mix with slow drainage.I've grown it in my ponds but it doesn't go so well nor is it easy to harvest. I suspect that it requires more nitrogen than it gets from a pot in the water. The x-number-of-spot Ladybirds first settled on  my potato plants to no ill effect but now the infestation is abating on the KK. Easy to kill  between the fingers -- I just had not be doing it. They don't hop away like some bugs.

But once per week I get myself a great feed of KangKong Belacan -- and it amazes me how much chilli and garlic and shrimp paste these leaves can soak up.

Sounds like an extensive and practical garden. Aibika prefers warmth so I'm told - it did OK here over winter so should be alright for you too. It can need shelter depending on microclimate.

Kang Kong really likes the shade - warm shade, it's stressed to moribund in full sun. Perhaps try another spot or spots and if it's not stressed, the 28-spots will leave it alone.

You got hail, we got 3mm. I'll settle for rain rather than hail ;-)