Capturing the garden going about its everyday business...

It always seem to happen that I can never capture the garden in a photograph.

It's messy and jungle-like and green merges into green so that it is always hard to distinguish the species of plants one from t'other.

Captured en route to the heavens: my bottle gourd vine.Once up there it runs along an aerial.Below, mainly tomatoes. There's also a winged bean in there. As I recall: spring onions too.

The fruit of the gourd at consumption size:

Late corn, Balinese: Tested my soil. Since it still has a temperature of 22C at thumb length depth, maybe I can get away with it? I mean the corn to cob. Tomatoes in the foreground and some basils which I don't like so I've just planted some Greek Basil seed (which I know I  like) today.

Plunge pool in background: wherein I daily bathe my body despite the cooling weather. It's getting colder in the waters such that the regular reading of its daily diurnal chilling is making me obsessed with the minutiae of the centigrade scale.

Tromboncino climbing up a ladder. I trim back feral vine ends. But they are lazy climbers. They shoulda thought about that when they grew their fruits so long...A worm tower in the background and bean ladders.There's also a late Armenian Cucumber which seems to have miss-read the seasonal clock.

There's potatoes, beans, bulb fennel, tomatoes, chili and zucchini in there....somewhere. The straight up stems are Vetiver. The Styrofoam balls were washed ashore along Moreton Bay. I thought I'd use it to grow beans up but it waves in the wind.

Here's 'form' where none seems to exist. Drills of radish, carrot and coriander with mini-cabbage (I think) in the middle. Thus the dimples in the mulch.

Garlic, Perennial Capsicum and tomatoes in the background.Note how the grass clippings dry out to that 'look' -- and no weeds. The rope at left is an experimental drop down from the aerials above to gather and support the tomatoes below.

I like planting deep into the mulch (and soil) so that the young seedling is protected by the mulched thickness during its infancy. On sand you can get away with such hacks.

Each drill is a walled canyon filled with seed raising mix  into which the seed is sown.

These are the new beds: set of four surrounded by Vetiver -- and soon to be so divided. These beds are being planted out with seedlings as they come to hand..

The seed raising station moves around with the sun and seasons -- either towards the sun or away from it. That's my preferred seed raising container size:90mm Squat Plant Pot .Much more forgiving of my limited skill set than the thimbles.

The 90mm pot also doesn't require an expensive fertilised +++seed raising mix -- if you make your own blend.

Encroaching is a Kabocha vine. I had to move a pumpkin aside so I could take the shot.

The real surprise -- Japanese pumpkin, Kabocha. Got quite a few of these among the vine-age. Put lippy on it and  ask it out for a date. Change its nappy. Discuss philosophy. And you can eat it too.

Holes with hats: worm towers for kitchen scraps. Between two asparagus  ferns and supposedly some Yacon. I luvs these towers. Easy to make. Cheap. Efficient. Dog unfriendly despite the buried bones within. No rodent issues.

Note the sticks. I collect sticks of all kinds and use them to mark out what I plant. Usually that's a seedling rather than a seed.Seeds by their ownsome don't prosper so well in mulch.

I've given up on 'staking'.

No I haven't tried Corn Salad --mainly because I don't eat much in the way of salad greens except chicory, endive and radicchio.

I love endive passionately and this growing season I'm keen to explore the cooked version of chicory and endive...and bulb fennel.

At the moment I'm fiddling with my cabbage options as I find 'a' cabbage is a versatile must-have veg to always have at hand. And last year's harvest was good over a long period.

And there's always kimchi and sauerkraut that can be made.

Dave have you tried the Valerianella olitoria or as the Dutch call it "veldsla" it is grown in the Netherlands as a staple food.   It is called Dutch Corn Salad on the seed site.

I worry about standing on my worms. The earth and the mulch will spring back excepting when it is freewayed by daily traffic.

Indeed the few paths are thicker mulched than the beds.Cushioning for worms underneath.

Here I was thinking I'd be returning to normal gardening in way of cultivating  vegetables and I'm still stuck in chaos mode.

I'm hoping that when the Vetiver hedges grow up and consolidate in lines I'll inherit more form:'a place for everything and everything in its place.'

But I'm getting better and even plant the same vegetables together in small family groups when once I used to separate them all.

That's the lesson you learn from potatoes -- because I kept losing the place where I'd planted them.They died back and went missing from harvest.

The tomato line drop is not a new invention.

For beans and such I used to use jute twine but that's too fiddly. So I'm hopeful for my snakes (drop line) and ladders (narrow trellises).

Maybe one day I may actually prune train my toms.

Here anything pushed into the earth in way of staking or support falls over.

The other thing I've learned is that this garden doesn't produce a glut. Happenstance perhaps. But when you mix different types and different sew dates with shade and sunshine you can stagger the menu.Also if you push the seasons out of kilter and not be ruled by them like dogma.

I used to grow vegetables to sell  at monthly local markets but it warped the whole garden's dynamic.

As for the meaning of the chaos:

• Better use of space - a lot of food is produced and many types of vegetables can be grown in the same space over a longer time.

• Fewer pests and diseases - the different colours, shapes, textures and scents of the leaves confuse pests, and diseases can't spread as easily from one plant to the next.

• Less weeding - there is no space and no light on the ground, so weeds can't germinate.

I can confirm all these benefits from my own experience. The challenge, however, is recognizing plant height and shade shadow thru the yearly cycle-- with the added advantage that we are gardening in the sub tropics.

HOLY CRAP!!!!  You productive bugga.  Your garden is most impressive Dave.  Business is good at your place!  Oh, 9 out of 10 successful garlic strikes were planted out today in the tiny winter sunny side of my yard.  Your "start them in a pot" advice was sound.

Great photo's of your progress in your 3D garden.  Do you find yourself singing "Tiptoe through the tulips", I would be worried about standing on my plants.

...and Dutch Late Flat Cabbage which is a very interesting heirloom. 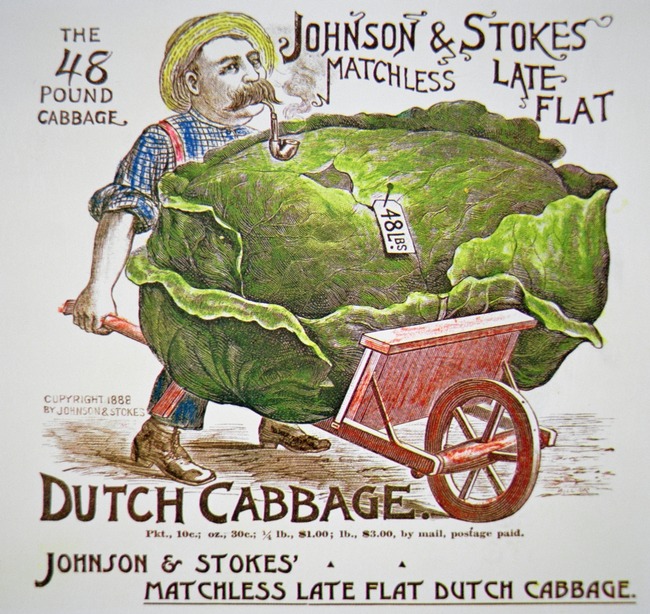 What I don't use in way of seed or seedling I can divert to the school garden. But i know the school kids love the peas...and they love BIG veges.

I love the chaotic productivity you have going on there Dave. Everything looks lush and healthy. No end of meals there! But your seed station is evidence of planning for the next phase, to fill the gaps. Your garden is great.