At left is a recent harvest.

If you have space, 'tis an essential grow.

Since I'm renovating outback I had to cut down a couple of these vines, thus the contents of these bowls.

I did it early as they were yet to seriously fruit and ripen.

In play is a recipe for Zucchini KimChi. We have just caught the harvest being sliced up in regular width before being drowned in a salt bath over night.

What happens next in terms of  DIY procedure is outlined HERE graphically.

However, this is a kimchi and I've become a kimchi aficionado.

If you recall (perhaps you don't?) I flagged my delight in a kimchi in kraut mode (LINK) which seriously turned me.

I later made a Cucumber KimChi which was (if it was at all possible?) even better.

Now I'm embracing the zucchini option. Based on this recipe -- LINK-- I expect wonders -- primarily because the paste's taste rocked my mouth.

It's not as though you can, or would want to, make kimchi out of any vegetable. The Koreans have their preferences each season but they target species.

My starting problem was I had a surfeit of veges -- ergo the zukes -- and by fermenting this over supply I could preserve it. Much as I like pickles, they don't last  long once opened. Zukes won't freeze well either.

So 2 kilograms of Tromboncino quickly fell victim to my fermenting blade. My mandolin actually.

My challenge was that over Summer the squashes I had planted took over my garden. I knew they spread out but I was naively unprepared for the scale of the consequences. Anything else in that fam I can easily store as pumpkins -- as I can with Tromboncinos  as they age: they turn into curly Butternuts.

Under threat of so much greenery I decided to change gardening tact and since have been making Vetiver hedged beds happen. See HERE.

The patch looked like a construction site for a time -- worthy of a few visits from Kevin McLeod -- but now its re-shape is shaping up. En route I've been madly raising seedlings -- in order to fill up the new space.

Despite the clearances,and the many seedlings I've planted out, I may still run out of space for all the stuff I hope to plant.

The design seems to be working.

Why? Because of the Vetiver hedges.

After the partner moaned that I don't allow the chooks to free range the garden, it occurred to me that with beds protected by  Vetiver living fences the chooks can forage without me having a panic or heart attack.

In the islands of the Pacific Vetiver fences are used that way -- against poultry and pigs. These grass hedges are trimmed to order and for mulch.

The cane toads will be locked out.

Us humans  must step over the hedge.

Main point: it is coming together.

I've also tweaked my aerial trellises which under performed over Summer.Since I changed my watering protocol to over head sprinkling,  walls of greenery created 'rain shadows'. So now I need to keep my trellising narrow. To do this I drop narrow cuts of plastic lattice from the cross lines above the garden down to the climbers below.

Like so many ladders in a board game -- with   climbing plants as the snakes -- but with snake and ladder  running in reverse. 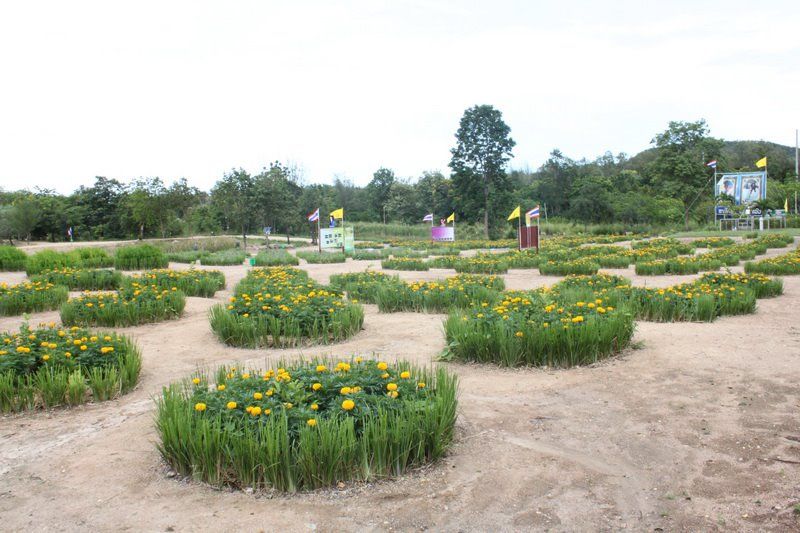 Vetiver hedges in a public garden in Thailand. While I just finished the to-do list for the school garden by now I have created all these new beds in my own.

Not much in way of escalating as I didn't want to disturb the earthbound creatures. So the 'leveling' is such that it has many contours.

Each bed is hedged by Vetiver. Just made it as I ran out. There are a lot of Vetiver slips in rows in the ground.It is indeed the growing of the multitude.

Lots of garlic, root veg experiments. Transplanted the asparagus  and the Yacon. Brought in some market seedlings, especially spring onions.

I have space to fill.

My mower-men have been generous with the lawn-clippings drop off service and I have covered all my new land with the stuff as I colonize. Hopefully, by years end I'll be replacing the grass clippings with Vetiver mulch.

[Why? Here's a secret: lawn clippings mulch encourages flies. And since I use so much of the stuff: I know. Also Vetiver takes so much longer to break down than desiccated lawn and has a slight insecticide effect.]

The most amazing thing as I plant out is the soil's worm population. If you have been following my gardening adventures these last few years you know from whence I come.

But today - EVERY time my  trowel enters the earth I disturb  earth worms -- like several of the darlins.

After years of earth worm gardening I have hit the underground jackpot. I have such a large family now.

Bury me among them when I go.

It's disconcerting: step outside the back door and there is all this life underfoot.Unseen. Unheard. Only I know my backyard minions are at it 24/7.

Indeed 'underfoot' -- as in the renovation I have cut way back on access paths and now walk upon the beds to harvest and do the occasional task.

My tenants have not complained 'cause I think mulch is a cushion and any compression you may incur thru occasional traffic usage, bounces back when inundated.

[We design our gardens like we do out suburbs with roads and footpaths taking up so much of the arable land.My grandfather's veg garden was traversed via stepping stones.But then he wasn't a mulch man.I reckon a good layer of mulch is the new wall-to-wall Burgundy Axminster.]

I did try to photograph the new beds as they developed but the convergence wasn't self evident.

Now I am getting more form to the retrofit.

Fortunately, what with the earlier plant out and most recent divisions, I'm not going to run out of Vetiver to hedge my new beds.

That's a lot of stems to plant out I tell you.

My old clay pots have been recycled into the school garden--as the image indicates.

Fortuitously, my mowermen have been generous of late. So as well as carting woodchips about the primary school I've spent much domestic labour moving grass clippings onto my new outback beds.

Every now and then I pause to plant some seedlings or sew some new seeds.

When so engaged I get to muse about my options and decided that at the school garden at least, rather than be contained by the usual worm farm rig -- which i'm no good at -- I'll employ this setup using wire mesh (LINK) -- and convert an old plastic pot into a lid/cap/hood.

The dirty earthworm and I are real bosom buddies -- but your compost type worm and I can't seem to groove. Why invest in all that effort, when you can break down the mulch in situ?  I'm not against throwing some compost worms down the hole -- but  everything rots in time ... and patience is all.

In the image, the plan is to insert/bury the 'mesh tower' in the middle between the three pots in each bed you see. Kids top up with wastes from the tuck shop or whatever.

Citrus, onion, even meats should be OK given the design of the 'tower' and a preference for earthworms.

Sort of similar to the African keyhole garden concept: a central composting bin. When it's full, just move the mesh cylinder about the garden.

Pulled weeds and brewed into tea.

[Ironically we teach the kids about 'fertilizer' but we don't really use any. Gotta find a better way to get them to consider what cannot be seen in way of soil microbiology. Earthworms are really a great way to suggest how the complex ecology works. Tiger worms in trays dripping worm juice don't possess that self evident relevance.]

I'll do the same in my own garden but since the chooks eat all our kitchen scraps I'll need to adjust the setup. Bury poultry manure perhaps instead....

The other project at the moment is growing Custard Apples from seed. It's a 'thing' apparently. Me buying fruit trees is usually a waste of money because they do not take to my sandy garden --aside from citrus, mulberry and, finally, pawpaw.So I always like to explore the cheap route while my garden's topsoil consolidates.

If you're interested growing custard apples from seed is easy: LINK

I may get the kids to do it some time. They did great with pawpaw seeds. First crop -- massive -- is ripening. Crisper and chewier than I'd prefer. needs a bit more time to reach more flavour depths.

Check the recipe I linked to -- you do a separate paste.Hot as you want. As it is written:

"Place all paste ingredients in a mortar and pestle or blender and grind/blend thoroughly until smooth. Taste. If you want it hotter, add more chilli. More pungent? Add more garlic. Remember there will be a distinct sourness introduced from the lactic-fermentation, which will change the flavour a little! When you’re happy with the flavour, combine the paste and the cucumber in a big mixing bowl and massage thoroughly with your hands. You may want to wear gloves (it’s SPICY!)!"

I prefer fish sauce to tamari.

Of course, when blending up chili don't hang your head over the blender as you may 'chill out' and go a bit gah gah.

Nothing like the punch of capsaicum up the proboscis.

Better half has just finished trimming vetiver grass and dropped the cut clippings behind the hedge.

That zuchini ferment looks like a good idea, do you do the paste separately. Looks like hot stuff.

You can trim Vetiver to size and use the cuttings for mulch. I find that here V doesn't grow extraordinarily fast -- not like 'lawn' grasses after Summer rain. Trimming will also cause the clump to thicken.

Given that it grows 1.5-1.8 metres tall if left unattended,  I estimate that it can be cut back at least 2-3 times per year. Given its bulk laid out in a hedge line around its target usage bed, that makes for easy cut-and-drop mulching.

So far I've cut my V at various times during the year without ill effect to the plants.

The only problem I've had is that weeds will grow around the base of the Vetiver as it consolidates in the soil and pulling them is likely to also uproot the V slip I've recently planted. I'm experimenting with cutting back the weeds with scissors and mulching on top to suppress further growth.

Of course, once the V roots take hold and go down deep you need serious effort to dislodge them.

Those Vetiver hedges are tiny! They must trim them weekly almost to keep them so short.