So I cleared part of my sweet potato patch because it is so overgrown. It was taking over the beds and escaping to the neighbours through the retaining wall. I need the space now that I am over the styrofoam phase. The plan is to get rid of all styrofoam boxes and use every bit of nooks and cranies in the garden for useful plants. That includes flowers… 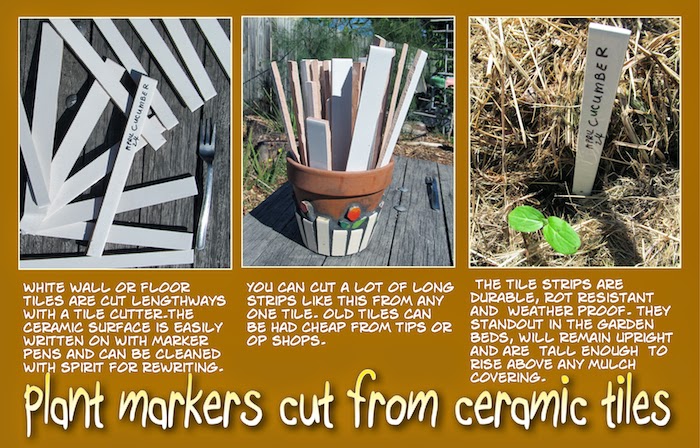 After considering my garden marker options in a recent post, we cut some ceramic tiles for use in the garden beds.  As far as I can…
Continue

Little hands rising from the dirt 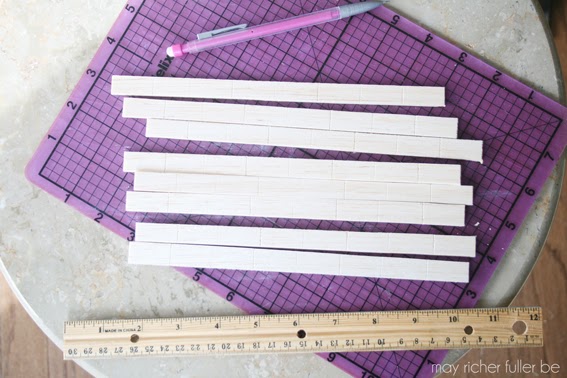 I have been nagged big time by the domestic challenge of garden markers. Me been thinking that if I could only find a means to flag my garden content my life would be easier.…
Continue

Well, I think I'm really getting into this "farmer" groove thing even though I only have about 600 sq m of land.  Went to visit my family in the country these school holidays and they all have chickens.  Watching my kids collect the eggs, I suddenly had the urge to grow my own.  It was something that I had always wanted to do but seemed like too  much effort and not enough space.  With those awful hibiscuses gone from down the side, I now have enough space and the holidays have rejuvenated…

Mulching with lawn clippings: Oh the joy of dessicated grasses!

I love grass clippings! Can't get enough of 'em.
That's not just me being rhetorical but a statement of fact: I can never get enough grass clippings. Grass chopped up by mowers maketh up my garden. Year in  year out in all weathers I've collected and  distributed cut grasses atop my garden beds.
This…
Continue

Trench Mulching, Pit Composting, Anaerobic Composting...Honey Holing: call it what you will -- it works

Trench Mulching, Pit Composting, Anaerobic Composting...Honey Holing: call it what you will -- it works.
Burying rubbish may be a crude way to garden…
Continue We've already picked heaps and still lots left. I read it freezes well and makes good jam/jelly or juice. Its in an area that does not get a lot of love, yet survived the dry summer! The raised vegie gardens (modified hugelkulture) are going well - 6 weeks and so far harvesting radish/beans/lettuce and spinach leaves, plus found some bonus seedlings compliments of the…

I don't know why it happened but becoming a parent has changed me. It has made me want to run away to a hobby farm and raise my kids away from it all. I would probably last all of two weeks and then be a hysterical mess, who knows?

While escaping the suburbs is not a possibility at the moment, embracing them is. I'm learning to be thankful for what I have. Which includes a massive yard with loads of potential. It's a place to start making better choices for our new family and the… Continue

After a lot of messing about I've finally decided to say 'good bye' to my Bananas.
They are very tasty yet the effort involved in growing and harvesting them is just too much for we old boilers.
Yesterday the stem with half-mature fruit crashed to the ground. I had propped it with a scissor-prop. In the wind, the stem was moving to and fro and it moved once too often and out came the prop. The already-bent stem was weighed down with the bunch and I had removed the two lower hands to…

After reading David's info and photos showing the grub pests on Tomatoes, I took a look at mine.
Yup, grubs galore; munched fruit and chomped leaves. These Tomatoes (Super Souix, Green Zebra and a volunteer) are in the new wicking beds -…

Warrigal greens and other preferences

I'm really taken with growing and consuming Kale in the cooler months and Sweet Leaf ( AKA: katuk, star gooseberry:-- small SE Asian tree which is deciduous south of the Tropics) in Summer, but I sometimes run out of green eats -- in part because I use these leaves in everything.

Not All Dragon Fruits are Perfect ...

But the taste is the same! Slow farming with snails, or Heliculture Per the QLD MUSEUM WEBSITE: The European Garden Snail now classified as Cornu aspersum has previously been known as Cantareus aspersus and Helix aspersa.…