I had not given a clear perspective of the challenging context of our current coastal Vetiver planting.
Here's a broader view of the hedgerows.The top photo is taken looking north.
South of this spot, residents have just spent thousands of dollars laying down rock walls after Cyclone Oma stripped the foreshore of so much sand.
Unfortunately once you wall up, you lose your beach at high tide as the surges create turbulence at the base of the rock tumble and undermine any sand that accumulates there.
While mangroves are the preferred weapon against the sea this section of beach has been devoid of them in living memory.
The dead SheOak 2 metres in front of the embankment, is an indication of what used to be an old shoreline.

Well, this week we finish planting out the gaps in the foreshore hedgerow. That is, so that the growth within the red circles are consolidated at full density.

If you look at the top image, a dead tree -- a dead SheOak -- sits isolated with its feet in the sand. That wonderful tree -- preferred as a Mangrove Kingfisher perch -- suggests that despite eroded appearances there is a 'dirt' down there.

Indeed, maybe not that far down as SheOaks are shallow rooted:

"Casuarinas have a shallow root system which tends to uproot and topple during high winds, posing a significant hazard to coastal storm evacuation routes. Also due to their shallow root systems; Casuarina-infested beaches are more prone to sand loss and erosion."(REF)

Therein lies the challenge, My Dave:

"Your mission if you chose to accept it, is to recover the shoreline as far out as that tree by planting it with Vetiver hedges."

I can see the media coverage now.

Of course so much is against the prospect, especially the fact that any attempt to re-engineer the shore there would be in isolation (for now) from the  contour of the rest of the waterfront.

If the Vetiver roots can reach down and consolidate before the Summer storms and any cyclone activity -- the sand will gather and pile up. As far as I can make out, most other coastal erosion native species (used in beach protection) are only good for holding down the sand.

This is a different approach.

The Holocene is the name given to the last 11,700 years of the Earth's history — the time since the end of the last major glacial epoch, or "ice age."

I am familiar with the article you cited.Thanks for reminding me of it, Christa.

Of interest is that the is that these north south ridges (overlayed with sand) are the basins that hold the aquifers that 'flow' parallel to the coast.

"During the last four decades, the Beachmere shoreline has re- treated into the beach ridges that were emplaced at least a century ago, which indicates the vulnerability of the coast to further erosion induced by storms or rising sea level....During the last several decades, much of the Beachmere shore- line has eroded into these younger relict ridges. Drivers of these changes in shoreline sedimentary regime are yet to be accurately determined. However, since there are nearby sources of marine and terrestrial sand, it seems likely these changes are related to switches that occur in the nearshore sand transport pathway. "

Which means that the coastline is unstable because both sand and currents move --  and sediment is brought down by the Caboolture River.

There's plenty of sand out there.It has chosen not to sunbathe  on the beach.

Dave, what does Holocene mean?  SITE  shows details of a Holocene area in Deception Bay.  Is this an old era or the latest era? 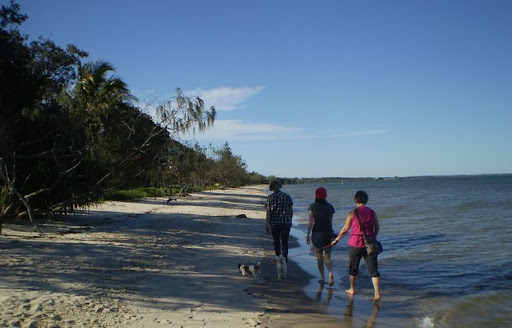 Looking north along the same section of beach, 9 years ago. Much fringing tree and brush cover has been lost and the sand has flattened and been shifted.