DO YOU EAT YOUR FIG LEAVES?

I didn't realise fig leaves were edible until I read this article by Morag at her OUR PERMACULTURE LIFE blog site. 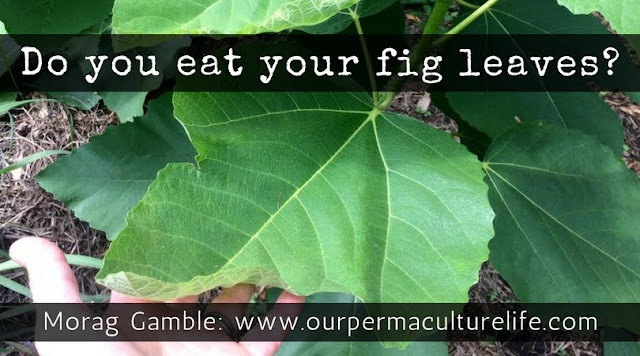 My fig tree (Ficus carica) is sprouting an abundance of soft large tender leaves at the moment. It'll be a while till there are any figs ready, and to be honest, in this climate (subtropical), the amount of figs I can harvest is quite small.

I have placed the fig tree in my landscape design to be close to the chicken house. This way, everyday I see how the fruits are going and can harvest them before the birds.

My daughter and I love fresh  figs and we delight eating the few we get right there and then in the garden. In actual fact, I don't think a fig has every reached our house.

Anyway, I was standing there looking at this fig tree the other day and thinking how nice the new leaves looked. They certainly looked edible, but I have not tried them before, so I've gone and done some research. This is what I found.

yes often use them instead of grape leaves when making dolmades ! a very different texture and taste !

Who woulda thunk? ;-) The more leaves you harvest though, the less fruit you will harvest. A neat balancing act.

Be useful for us who get no damn fruit.

Andy how can you not get fruit from a Fig? :-O They need lots of sun, not too much fertiliser and some patience. One of mine I moved twice took 2 more years to make fruit but it's making up for lost time. The others get pruned each year and Biodynamic paste applied and watered when I remember. About 2 years in their permanent sunny possy and the fruit appears right on cue about now and into the summer.

Could be insufficient sun.  It doesn't get a lot in winter on that side of the yard.  I might see if Roz will let me move it.

No doubt depends on how many trees you have. If harvesting a small amount from a few trees the impact would be minimal.

How do you cook/prepare yours Mary-Ann?

Love this, thanks for sharing! We have 4 fig trees and whilst they all produce fruit, I love the idea of being able to use the leaves too. Has anyone ever used them as a replacement for spinach in a spinach and feta pie?? Wonder if this is a possibility??

How would figs go on verge or footpath garden  should be plenty of sun .

From 'Meals and Recipes from Ancient Greece':

I hadn't heard of fig leaves as dolmades so had to do some research: and there you go! LINK: According to the food historians, modern stuffed grape leaf recipes descended from ancient Mediterranean fare. Turkish "dolma" and Greek "thrion" were known to ancient cooks. The earliest recipes of this sort were both sweet and savory and used fig leaves. Reference to grape leaves began to appear around the 1st century AD.

"Dolmades are stuffed vine leaves (the singular is dolma). The dish is popular all over the eastern Mediterranean, and particularly in Greece and Turkey. It consists of grapvine leaves blanched and then wrapped around a filling (typically cooked rice and herbs, and often minced lamb as well), braised, and usually served cold as part of a mezze, or mixed hors d'oeuvres. The word dolma itself is of Turkish origin, and is a derivative of the verb dolmak, fill'; dolmades is the Greek plural form."
---An A to Z of Food and Drink, John Ayto [Oxford University Press:Oxford] 2002 (p. 111)

"Dolma. Vegetables stuffed in the E. Mediterranean style. There are two main categories: those with meat stuffings (usually extended with grain), which are served hot, often with as sauce..." and those with rice stuffings (often enriched with nuts, raisins, or pulses), which are served cold, dressed with oil...In Turkey, a distinction may also be made between dolma ( stuffed thing'), made from a hollowed-out vegetable...and sarma (rolled thing), where the filling is rolled in an edible leaf, such as the vine leaf or cabbage...The distribution, as well as the name dolma itself, indicates that this dish belongs to the court cuisine of the Ottoman Empire. Vegetables had been stuffed before Ottoman times, but only sporadically. For instance, the ancient Greek "thrion" was a fig leaf stuffed with sweetened cheese..The Ottoman origin is somewhat obscured by the fact that in some countries stuffed vegetables may be referred to by a native name meaning "stuffed."..In places as remote as Kuwait and Damascus, instead of mahshi waraq inab (stuffed fine leaf) one may say mahshi yabraq (in Kuwait, mahshi brag), which comes from the Turkish yaprak (leaf)."
---Oxford Companion to Food, Alan Davidson [Oxford University Press:Oxford] 1999 (p. 253).

"Fig leaves, thrion, pickled to reduce their bitterness, were required in a well-stocked larder; they served notably as wrapping for dishes resembling modern dolmadhes."
---Siren Feasts: A History of Food and Gastronomy in Greece, Andrew Dalby [Routledge:London] 1996 (p. 79)

"In autumn, as the Pleaides go down, you can cook bonito-and you can cook it in any way you please...But if you want to be told this too...the very best way for you to deal with this fish is to use fig leaves and fresh oregano (not very much), no cheese, no nonsense. Just wrap it up nicely in fig leaves fastened above with string, then hide it under hot ashes, keeping a watch on the time when it will be baked. Don't overcook it."
---The Classical Cookbook, Andrew Dalby and Sally Grainger [J. Paul Getty Museum:Los Angeles] 1996 (p. 59-60)

"Dried figs were particularly popular in Rome, and though Columella [Roman agricultural expert & author, 1st century AD] considred them to be the winter food of country people, he gives details of an attractive way of preserving them. He suggests treading them out, them mixing them with toasted sesame, anise, fennel seed, and cumin and wrapping balls of this mixture in fig leaves."
---Pickled, Potted, and Canned: How the Art and Science of Food Prserving Changed the World, Sue Shephard [Simon & Schuster:New York] 2000 (p. 41)

"The Arab world was under Ottoman rule for five hundred years, and the Turkish influence is seen in may preparations, such as stuffed grape leaves. But the stuffing of vegetables has its roots in the Arab cookery of the early Islamic empire of the Abbasids in Baghdad, possibly learned from the Persians. Ottoman chefs perfected the stuffing of vegetables, and today nearly everything that can be stuffed is stuffed. Stuffed grape nad cabbage leaf are probably the most common and loved of all the stuffed vegetables. Stufed grape leaves are a popular mese or mazza in Greece, Turkey, and the Arab Levant and are known as dolmades in Greece and dolma in Turkey. With Arab cooks, the stuffed grape leaf becomes a littel more complex and elaborate. It can be served at room temperature and is called waraq inab ni'l-zayt (grape leaves with olive oil) or it can be served hot and is called waraq inab (grape leaves)."
---A Mediterranean Feast, Clifford A. Wright [William Morrow:New York] 1999 (p. 322)

"The use of grape leaves as an ingredient in cooking is limited to Greece, the Balkans, and the Middle East. The name dolmas is Turkish, which might be a clue not so much of its provenance but of its travels. Nowhere in Europe and certainly not in any of the vine-growing regions of the European Mediterranean west of Greece do we find any dish even remotely resembling our dolmades. Perhaps one reason the dish stopped short in Greece and never spread westward was because the Ottomans never made it as far as Italy or France. The Ottomans spread the dish we know as dolmas all over their empire. Guessing the origins of any dish is always a tentative excercise. In the case of dolmathes, rice-the main ingredient-might be the key.

"The ancient Greeks knew of rice. In fact, Theophrastus mentions it in his 300 B.C. work, Enquiry into Plants, but 18 centuries elapsed before rice became a part of the Greek table. Greeks began cooking with rice in the 15th and 16th centuries. As for the provenance of the grain itself, it is known with relative accuracy that the grain first grew in Persia. And it is in fact there that the first written mention of a dish similar to dolmades appears, in the diaries of a symposiast at one of the banquets of King Khusrow II at the start of the 7th century. There in short is the long and winding history of one of our favorite foods. We might claim it as our own, as every one of our neighbors does, but the dolma followed its own fateful path through history and time. It is a dish that belongs both to everyone and, alas, to no one."